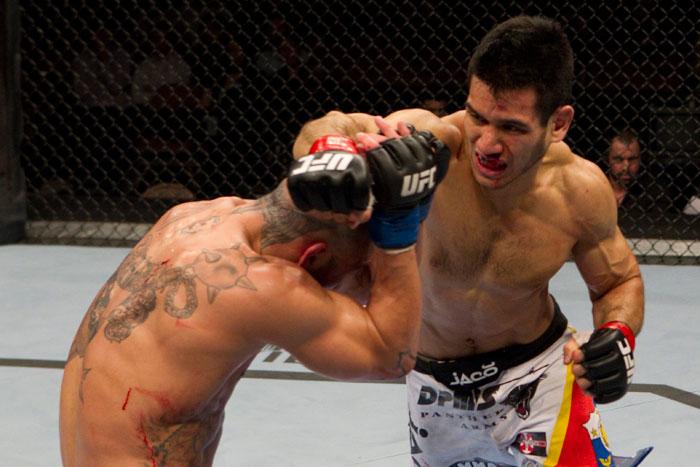 There is something to be said about the power of redemption and second chances.

The comeback is a storyline deeply ingrained in the culture of sports, as the athlete in the pressure of the moment has already dealt with adversity or a setback that took them away from something they’d invested passion and effort into. Simply making it back to do that thing they do one more time is not only a testament to their mental fortitude, but proof they refused to be denied the chance to reclaim what was once lost and now found once again.

Phillipe Nover isn’t looking to make anything right or correct something gone astray. Instead, he’s intent on showing that he’s now the fighter he was once figured to be half a decade ago.

The New York native earned acclaim during his time on the eighth installment of The Ultimate Fighter, and by the time he landed in the tournament finals against Efrain Escudero, the expectations surrounding him were high. As things would turn out, the high standard for excellence that was set would be something “The Filipino Assassin” wouldn’t live up to, and just north of a year after his loss to Escudero, he was out of the UFC entirely.

The quick turnaround and disappointment that followed could have been enough to shake Nover’s resolve and make him doubt whether or not he belonged at the highest level of the sport, but that’s just not how the 31-year-old is wired. He’s from Brooklyn, and if history has shown the world anything, it’s that New Yorkers come equipped with a unique brand of toughness.

Therefore, he dug in his heels and got back after it, and five years later has earned the second chance he’s held as his motivation every day throughout that stretch. Furthermore, Nover will make his comeback when the Octagon touches down in Manila for the first time on May 16, and it has created the dream scenario for a man determined to show and prove he belongs.

“To get back in the UFC is a dream I’ve been pursuing over the last five years,” Nover said. “On top of that, to be back in the UFC and to be on the first UFC card in Manila is an absolute dream come true. It’s one of the best feelings I’ve had in the last few years of my life. Just getting that phone call was amazing. It actually happened on my birthday. My manager called me in February and told me I was back in the UFC and that I was fighting in Manila. I couldn’t believe it. I was doing back flips I was so excited. It’s just the perfect way to come back and I couldn’t be more excited for this fight.

“This is absolutely all about redemption. This is my comeback. I had a lot of fans following me before, but after a couple of losses and moving out of the UFC, they lost track of me. They probably have no idea what I’ve been doing these past few years and it is going to be great to come back and show what I’m made of. This is definitely a feeling of redemption. I’m going to come back and prove to the UFC, the fans and myself that I belong here because I believe that I not only belong in the UFC, but that I belong at the top of the division.”

While Nover competed as a lightweight during his previous stint with the organization, his return will come in a different weight class. The resurgent veteran will drop down into featherweight waters to face Yui Chul Nam at UFC Fight Night: Edgar vs. Faber this Saturday in a bout that is five years in the making for the TUF alum.

Even though Nover’s focus has been getting back to the UFC during that stretch, his immediate goals have been locked on the constant progression of his skill set. He knew it was going to take a string of victories to get the phone call from the UFC, but to assure that would happen he needed to work to build a well-rounded arsenal that would make him dangerous in every aspect of the fight game.

With that in mind, Nover set about crafting additional weapons to go with the knockout power he already possessed, and the process was bolstered by the natural maturation that comes with getting the time and experience that he lacked in his first go at the highest level of the sport. Those are the elements he plans to put on display when he steps into the Octagon in Manila, and he’s confident he’ll put on a show that fans will enjoy.

“I feel like when I first hit the UFC years ago I got away with just having strong hands and an intimidating striking style,” Nover said. “Now, I am so well-rounded. I still have power in my hands, but I also have a strong wrestling game and my jiu-jitsu is better than it has ever been. I have put it all together and I am a complete fighter now. It took many years to do that and I have been fighting for the last 13 years of my life in mixed martial arts. I have experienced the ups and downs. I know what it is like to win and lose on big and small stages alike. I think the fans can appreciate that.

“Now is the time. I’m 31 years old and I’m coming off a few good wins. Even my losses outside the UFC have been good fights. The first was a split decision many people felt I won, and the second was against Tony Martin, who is now in the UFC. He was probably the biggest 155er I’ve ever faced. Now I’m moving to 145 and I think that’s a great move. I’ll be a big featherweight rather than being a small lightweight. I believe I can hang with anyone in the top 10 of the featherweight division and I’m going to prove that by smashing this guy. I’m super confident right now and it’s going to show in my performance.”