Philippou Still Taking It One Fight at a Time

“One thing I can promise, I will be ready to fight, I will be 100%, in shape, healthy, and trying to finish my opponent." - Costa Philippou 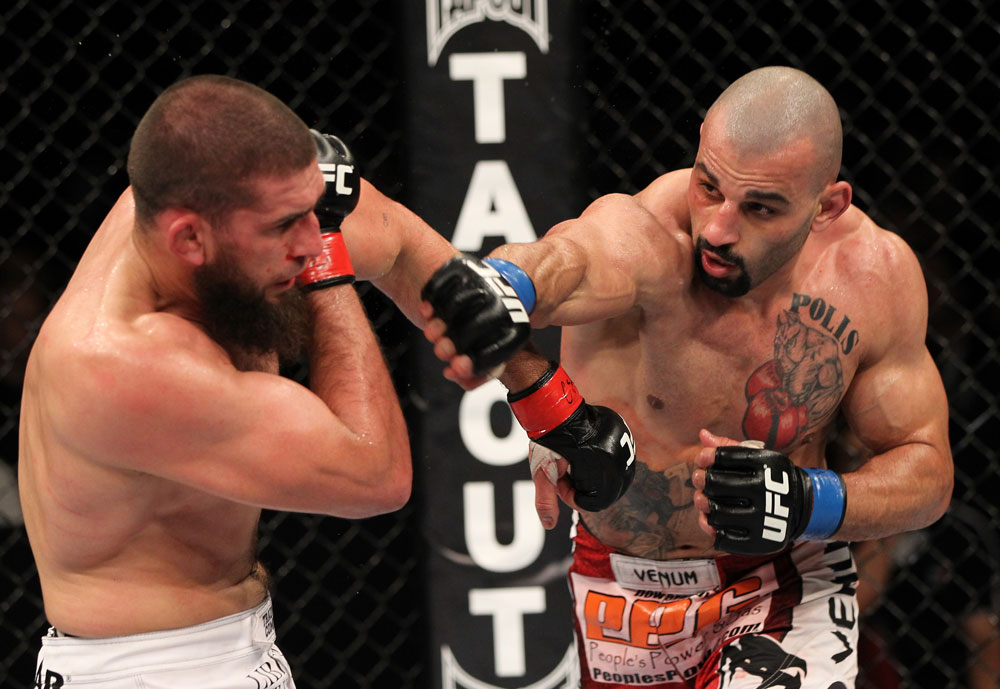 “My haters are my motivators” - Nicki Minaj

There’s at least one UFC fighter out there who admits he reads MMA websites and what he’s seeing is surprisingly not overwhelmingly positive. For middleweight Constantinos Philippou, who is currently enjoying a three fight win streak inside the Octagon, credit has been specifically hard to come by for his back-to-back victories over two-time Fight of the Night winner Jared Hamman and, most recently, The Ultimate Fighter season 11 winner Court McGee in March. In both bouts, Costa showed off his previous professional boxing skills with fast, accurate punches and solid footwork, but there are still dissenters whose voices are only fueling Philippou’s competitive fire.

“In the Jared Hamman fight, it was a short fight and he didn't get to punch me really, so a lot of people think I just got lucky,” explains Philippou. “People think that someone can get lucky with a punch and that doesn't make you a good fighter - I disagree. I walked in there trying to knock the guy out and I did that, so I don't believe in lucky punches. But in the Court McGee fight, he had a lot of takedown attempts and couldn't take me down. I got to show a lot of boxing. I got to actually show I'm a good striker. I read a few days ago online that I'm the most underrated fighter for the middleweights in the UFC. I agree with that. Some people think I got lucky and then some people think I was running. Punching and avoiding takedowns takes skill. I'm going to keep winning and I'm going to keep fighting and, eventually, they're going to see.”

The 32-year old Cyprus native and current Long Island, New York resident followed up his nearly decapitating first round knockout out of Hamman with a polished unanimous decision over McGee at UFC on FX 2. For 15 minutes, the previously undefeated inside the Octagon McGee tried his best to dictate the action, but was literally beaten to the punch over and over again by the quicker Philippou. As the 13-2 McGee is universally seen as a tough, well-rounded opponent, Costa proved it will be a chore for future opponents to wrestle Philippou to the ground, and it won’t be any more fun eating his array of hooks and uppercuts.

“He was dangerous all three rounds,” tells Philippou. “Every time I was trying to put together a combination or put more power into my punches, he was trying to take me down. I was worried about getting taken down and losing the fight, so I wasn't able to throw too many punches. I could only throw two or three punches and then move. I was obviously a little bit faster than him and had better footwork. I practiced a lot on my takedown defense. He couldn't cut me off; he didn't know how to beat me to the punch. In the cage, I don't have a game plan. I just saw how he reacted to my footwork and he couldn't cut me off, so I kept doing the same thing: move, punch, move, punch. It wasn't an easy fight. He's very strong and he kept coming, but I was always in control.”

The win against McGee was nearly a year to the day of Philippou’s debut in the UFC and was certainly a great highlight to cap off his rookie season in the organization. At 10-2, 1 NC, he showed a lot in his freshman year in the UFC by taking fights on extremely short notice, gritting out a victory over a veteran, scoring a highlight reel knockout, and defeating a former TUF winner. With a little over four years’ experience in this sport and a lifetime of experience in another one, Costa is making strides with each Octagon appearance to be seen as a mixed martial artist instead of a boxing convert, as well as a good fighter who could one day be great. It’s a long journey to achieve those goals and Philippou is in no rush to get there.

“It's a great feeling fighting in the UFC,” says Philippou. “It's every mixed martial artist’s dream to be in the UFC. The fact that I've won three fights in a row, that's great. But I take every fight one at a time and I'm not planning for the future now - I'm just focused on my next opponent. Everyone is asking me do you want to fight someone top 5, top 10, or challenge for the title? And I'm not even thinking about that. I'm not even ready for those guys - how's that. Nobody admits that they're not ready for a title or high competition like that. I'll be the first to admit that I'm not even close to that. One fight at a time. Hopefully, I win my next fight and we'll take it from there.”

Up next for is a battle with the granite chinned, cardio machine Riki Fukuda at UFC 148. A star of the Japanese MMA circuit, Fukuda joined the UFC in 2011 and lost a controversial split decision to Nick Ring at UFC 127. Minus the judges, most who watched this debut bout thought Fukuda won, including UFC President Dana White, who paid him his win bonus despite the results. A year later at UFC 144, Fukuda put on a striking clinic against Steve Cantwell where he threw and landed well over double that of his opponent and scored several takedowns. If there’s a game middleweight more under the radar than Philippou, it’s probably Fukuda with his 18-5 pro record.

“Honestly, I didn't even know who this guy was because most of his fights were in Japan and I never saw him before,” admits Philippou. “I watched his last two fights in the UFC. Overall, he has 20 or so fights, so he is a very experienced fighter. Pretty fast, tough guy, in excellent shape, he keeps coming. I saw in his last two fights, that you expect a fighter in the second or third round to slow down a little bit, but he wasn't slowing down at all. He kept coming. It will be a very tough fight. I'm in pretty good shape and I'm ready to go, so we'll see.”

Even for an MMA novice, one look at Fukuda’s record of 14 of his 23 fights going by way of decision means Philippou needs to be fully prepared for three rounds of constant struggle. On top of that, the Japan native can take a punch, with only one loss via TKO, but Costa believes it matters more who is doing the punching than the one receiving it. Fukuda’s original background is as a wrestler, but he does have a penchant for slugging it out on the feet, which makes this fight on paper similar to the one with McGee. A standup duel would please Philippou greatly, with half of his wins coming via fist-battering, but he is willing to show off his burgeoning ground skills.

“He's a little faster than Court McGee,” asserts Philippou. “I think everyone wants to try their striking skills for the first couple of minutes and if that doesn't work for them then they try to go to plan B and try to take their opponent to the ground and try and submit him or ground and pound him. I think that will be the case with Riki also. To be honest, I hope he strikes with me. I'm more comfortable on my feet, but if he decides to wrestle, then it will be a great opportunity for me to showcase my wrestling skills and my ground game. People don't really think I know how to wrestle or do any jiu-jitsu, so I'll be more than happy to go to the ground with anybody.”

In preparation for Fukuda, Philippou tirelessly puts himself through the ringer against the best and the brightest of the Serra-Longo Fight Team. Under the supervision of Ray Longo for striking and Matt Serra for Brazilian jiu-jitsu, he receives a nearly unparalleled level of expertise from each of these two larger-than-life personalities. As for training partners besides the numerous black and brown belts in BJJ milling about, Philippou has the privilege of tangling with two NCAA Division I All-American wrestlers from Hofstra University in Strikeforce’s Gian Villante and the UFC’s fastest rising undefeated middleweight Chris Weidman. For Costa, 15 minutes with Fukuda is a walk in the park compared to the daily treatment of fighting Weidman and the light heavyweight Villante.

“They're both amazing wrestlers,” affirms Philippou. “They're both bigger than me, they're both stronger than me, and they're both stronger than Riki Fukuda. I know that if I go three, four, five rounds with them and can defend takedowns from them then I will be able to defend anyone's takedowns. Weidman is fighting a week after me in a five round fight and we're preparing at the same time. He's in shape for five rounds and he'll keep coming stronger and stronger with every round. I know that Fukuda cannot match Weidman's power or Villante's power, so it definitely gives me a lot of confidence.”

On July 7th at UFC 148 in lovely Las Vegas, Nevada, Costa looks to earn some much deserved respect by clashing with Fukuda. “One thing I can promise, I will be ready to fight, I will be 100%, in shape, healthy, and trying to finish my opponent,” states Philippou, who will test Fukuda’s fabled chin for all three rounds if need be, but is focused on stopping his foe with time still on the clock. “Most likely it will be an exciting fight and I expect to win, and I'm going in there trying to finish the fight no matter what round it is.”

With a potential four fight win streak on the line, it’s about time fans jump onto Philippou’s war wagon before it runs them and the middleweight division over.