"I have been given a second chance, so I’m not going to waste it. I’m
going to give it my best shot and we’ll see what happens in Dublin." - Phil Harris 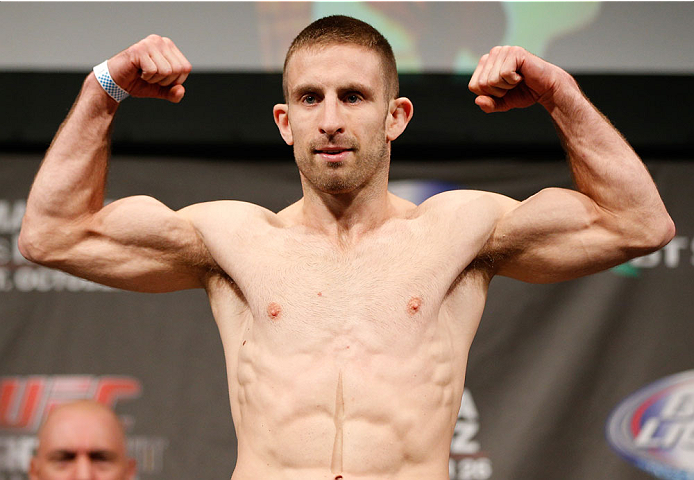 Phil Harris is a fair man. So after seeing his last three fights take place on British soil, he has no qualms about making the trip to Dublin, Ireland to face Irishman Neil Seery on Saturday’s UFC Fight Night card.

“Not at all,” he laughs. “My last couple fights have been in the UK against two Americans and a Brazilian, so I’ve been the hometown boy for my last three fights. It’s about time I’m the baddie for once.”

That baddie expects to hear some boos at the O2 Arena, but it won’t be the first time he’s visited the Emerald Isle to compete. Yet when you ask him about the reaction he received from the locals, he says “I really can’t remember. They probably didn’t love me.”

That’s okay, when you have 35 pro MMA bouts and a host of judo competitions under your belt, a few boos really won’t get to you when the bell rings. And if Harris needs anything else to boost his confidence, a 2010 win over Seery doesn’t hurt, though the 30-year-old from Portsmouth isn’t putting too much stock in that decision win.

“It was a long time ago, but he (Seery) pushes the pace, he likes to come forward, and he almost likes a dirty fight, a bit of a war,” said Harris. “I was a little bit more technical at the time, I was taking him down and trying to outwrestle him and outmaneuver him. But the fight was four years ago, so he’s probably changed a lot since then.”

Seery is still the same hard-nosed competitor he was then, and after winning six of his next seven after the loss to Harris, he earned a late-notice call to the UFC in March to face Brad Pickett. He lost the bout, but gave a good effort in defeat, earning him this weekend’s fight in his hometown and a second opportunity to shine.

Harris knows all about second chances, as he’s getting one in this fight as well, even though it’s his fifth appearance in the Octagon since his debut nearly two years ago in October of 2012.

“It’s gone pretty quick,” he said of the time since his fight with Darren Uyenoyama. “It’s flown by really. This is my fifth fight, but in a way it feels like my first fight again and my second chance. I’ve got a chance to hopefully do a lot better this time around and prove that I should be here.”

1-2 with one no contest in the UFC thus far, Harris was cut from the promotion after a March loss to Louis Gaudinot. Disappointed but undeterred, Harris signed a five-fight deal with European promotion Cage Warriors and plotted his return. An April fight in Amman, Jordan was scheduled with Kurban Gadzhiev, but that didn’t come off.

“The day before I’m meant to fly out there, I get a phone call, the guy’s got chicken pox,” said Harris. “They tried to get a replacement, but to fly someone to Jordan on three days’ notice to fight at flyweight, you’re up against it. They tried their hardest but couldn’t find someone.”

What was a huge disappointment turned into something else a few days later though.

“I got a call and they asked if I wanted to fight Neil Seery in Dublin for the UFC,” said Harris. “I was really pleased about that. That night, I found out that Louis failed a drug test and my fight would now be a no contest. It was like Christmas for me.”

Gaudinot’s positive test for a diuretic took the loss off Harris’ record and earned him another go round in the UFC. What’s going to be different this time?

“My first fight (against Uyenoyama) I took on three, four weeks’ notice,” he recalled. “We had just had a baby and she was three weeks old, so I was adjusting to being a father and I wasn’t training much, so to have a fight camp and be a father, it was pretty hard going for a short notice fight. The second fight (against Ulysses Gomez), I had a great fight camp and I won that fight. Then my third fight was against John Lineker, and he’s one of the best guys in the world, don’t get me wrong, but he missed weight, so that was slightly annoying. And then my next opponent, Louis, failed a drug test. So if I put it in perspective, I’ve not had the easiest of runs, so hopefully this time around it will go my way.”

It all starts with Seery, and that’s the only fight Harris is looking at right now. That doesn’t mean he isn’t aware of the landscape at 125 pounds, where recent title challenger Ali Bagautinov has been suspended for a year after a failed drug test and the man expected to challenge for the title next – John Dodson – is out until next year due to injury. That makes this division quite the wide open one, so it isn’t out of the realm of possibility that a few wins by Harris will put him in a lot different position than he was immediately after the Gaudinot fight.

“That’s the exciting thing about the flyweights,” he said. “If you look at who’s fighting who, apart from the top three or four maybe, everyone’s sort of beaten each other, so if someone gets a couple wins off, they’re the next big thing. Then they lose, and it’s ‘this guy’s the next big thing.’ So you’re only as good as your last fight really, but it’s even more so with the flyweights. If you get two or three wins, suddenly they’re talking about you and they’re saying this is the next guy to challenge (champion) Demetrious (Johnson). So it is an exciting weight class.”

But is Phil Harris the next big thing?

“That’s the plan my second time around,” he laughs. “I have been given a second chance, so I’m not going to waste it. I’m going to give it my best shot and we’ll see what happens in Dublin.”