"I know that I’m worthy to be there and that I can hang with anyone, and it’s a different mindset coming in – I know that this is my fight now." - Phil Harris 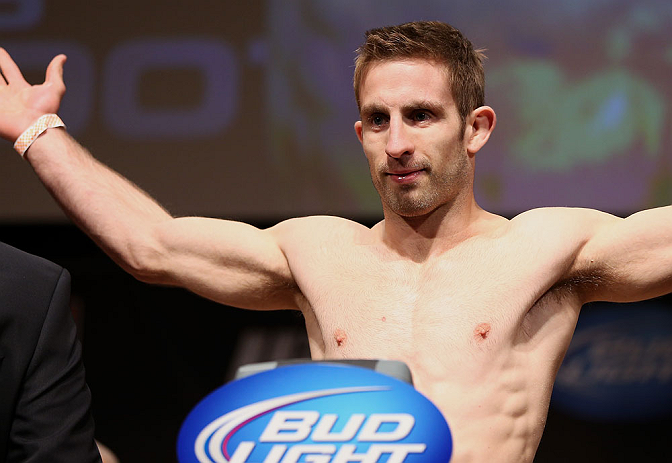 Before there was Michael Bisping, there was Phil Harris. Before Dan Hardy introduced “The Outlaw” to UFC fans both at home and abroad, Phil Harris was plying his trade in an England that wasn’t exactly ready for mixed martial arts.

“No one really took much interest in it,” said Portsmouth’s Harris, a pro since 2003. “People just thought you were fighting and that it wasn’t really a sport. It wasn’t until a few years later when I already had 10-12 fights that people started recognizing it and knowing it wasn’t a thug’s game, but a proper sport.”

By the time that 12th fight rolled around, the UFC explosion that was kick started by the first season of The Ultimate Fighter was going on, and Harris was building a name for himself on the local circuit, submitting opponents left and right. He even opted to take on a young Brazilian that was rolling through town named Jose Aldo in September of 2005.

Admitting with a chuckle that “It was pretty hard to research people back then,” Harris was stopped in the first round by the man that would go on to rule the featherweight division in both the WEC and the UFC. It was a run of success the Brit knew was inevitable for Aldo.

“As soon as that fight happened, I said this guy’s going places,” said Harris. “He’s going to be a world champion. And before I knew it he’s in the WEC and killing people there, and then he made his way to the UFC and he’s the champion at featherweight.”

Harris’ road to the Octagon would take a little longer. As Bisping won season three of TUF and subsequently reintroduced the UFC to England beginning with UFC 70 in Manchester, the door was opening for a new generation of British fighters into the organization. Hardy, Ross Pearson, and Terry Etim were the new breed. And though Harris built his resume and his record, he had one problem.

He was too small.

The featherweight division wouldn’t arrive in the UFC until late-2010, and even then, Harris was giving up sizable advantages physically. Bantamweight wasn’t even the right fit, as he was a natural flyweight, and it left him in a quandary, one he solved by a simple decision to be patient.

A five fight winning streak was interrupted after three wins by a near two-year break as he waited for the opportunity to fight at his optimal weight. In 2012, with the UFC now bringing the 125-pounders in, he got his chance.

“I had signed to Cage Warriors, a big show in England and Europe,” said Harris. “My manager said ‘get a few wins in Cage Warriors against good level opponents, and I will get you to the UFC.’ I fought two guys (Remi Morvan and Casey Dyer) won both fights, and that night I was in the bar, having a drink celebrating. We were talking about what’s next, and my manager said you won’t be fighting for Cage Warriors again. Your next fight will be in the UFC. And a month later he phones me up and says ‘you’re in, do you want to sign?’”

Harris signed, and by October he was in Minnesota, making his Octagon debut against Darren Uyenoyama. Yet what was expected to be a nip and tuck ground battle turned into a second round submission win for Uyenoyama. For Harris, who fell to 21-10 with 1 NC in his first loss since 2007, it was a harsh debut, but one that he has put to the side as he prepares for a date with Ulysses Gomez this Saturday in London.

“I sort of underestimated myself and overestimated my opponent,” he said of the Uyenoyama fight. “Obviously he beat me and he’s amazing, but I thought he was better than he was and I wasn’t as good as I was. Even though you try to block it out, it sort of plays on your mind like ‘oh, he already has a win in the UFC, and he’s beaten one of the stars from Japan (Kid Yamamoto).’ Now, I know that I’m worthy to be there and that I can hang with anyone, and it’s a different mindset coming in – I know that this is my fight now. And now that loss is out of the way, I’m not gonna worry about anything. I can go and fight how I fight best now.”

It’s a moment the 29-year-old can’t wait for. Not only is he getting a second UFC bout, he gets to do it at home in England for the first time in nearly three years. Most importantly, it’s another chance to fight.

“I was in judo at the age of six and seven, and I’ve always competed, whether it was judo or boxing, and then I turned to MMA,” said Harris. “I love the competing side of it, and whether I’m doing it for a hundred pounds or a hundred thousand pounds, I’ll still be doing it. I just love the competition side of it, being one-on-one in front of someone.”