"I’m just gonna mix it up, put it to him, and have a varied game and see what happens." - Phil De Fries 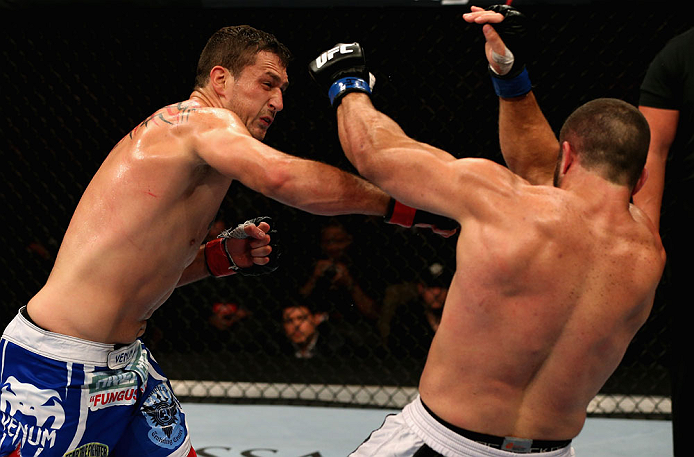 The first thing you may notice when Phil De Fries is in the Octagon this Saturday night for his bout against Matt Mitrione is that his nickname “S11” (after the fictional Sharktopus) is gone, with the Sunderland native opting to look for a “more serious” moniker. As for any other changes, he’ll let you figure that out for yourself once the bell rings.

“Before I was signed with the UFC, I was just getting by on ability really,” said De Fries, now in the early stages of his second year in the organization. “I was fitter and stronger than most heavyweights in the country. And it wasn’t until I got signed and I came out here and started working with one of the best coaches I realized how much I could improve and how basic my game was. I was basically just a jiu-jitsu guy with no wrestling. But now my game has changed so much and it’s like I’ve been reborn. I’m a much better fighter now than I was in my first eight fights.”

“Here” is San Diego, California, home base for the Alliance MMA team led by Eric Del Fierro and containing some of the best fighters in the sport, guys like Dominick Cruz, Alexander Gustafsson, Phil Davis, Brandon Vera, and De Fries’ countryman, Ross Pearson.

“I came and checked it out with Ross,” said De Fries of his introduction to the team. “He said try it out. We’ve got Phil (Davis), he’s one of the best athletes in the world; Alex (Gustafsson) is there, who I think is the best boxer in the UFC. They’re both big guys and both nice guys, and they devote a lot of time to you here and a lot of time doing game plans, and I fell in love with the place.”

Well, most of it at least.

“At first when I came here the heat was unbearable,” he laughs. “Where I used to train in the UK, there’s ice on the floor, basically, and it’s freezing cold. So I got used to the heat and the time difference and I get warmer easier, so I train much better here now. But now we’re going back to Sweden where it’s cold again…”

Sometimes you just can’t win, but De Fries isn’t complaining too much, knowing that he’s got a high-profile main card opportunity to get back in the win column this Saturday after a UFC 155 loss against Todd Duffee last December. In that fight, instead of picking up his third UFC victory, he got blitzed by the returning powerhouse and got stopped in the first round.

“With Duffee I kinda started with the wrong game plan,” said De Fries. “I can start fast, but I started slow for some reason, so I wanted to bring it out and increase the pace in the second and the third because Duffee’s a good first round fighter.”

The defeat was only the second of his career, the first coming via knockout against Stipe Miocic in February of last year. Yet despite being on the wrong end of two knockouts, the submission specialist isn’t about to abandon the standup game.

“I’ll go in there and throw down with anyone as long as I enjoy it and the fans enjoy it,” he said. “It’s good to get the win, but it’s good to be an entertaining fighter as well.”

De Fries certainly entertained in his submission win over Oli Thompson last August, and even before getting stopped by Miocic he was able to rattle the then-unbeaten Ohio native. So win or lose, the 26-year-old Brit is showing up to fight, which makes the upcoming bout with Mitrione a potentially explosive one, as well as a bout De Fries has been seemingly preparing for since last year, when the heavyweights were first scheduled to meet.

“I think altogether I’ve been training for Mitrione for 12 weeks, but it’s been good,” he said. “He’s an awkward guy to get used to, so it’s good that I’ve had extra time.”

So what does Mitrione bring to the table that’s particularly difficult to deal with?

“He’s a southpaw for starters,” De Fries explains. “He moves, he’s quite elusive, he’s quick on his feet, and he’s got a long reach, which a lot of the heavyweights haven’t got. But if you impose the right game plan with him, as with anybody, you’ll have an easier time with it.”

Against the hard-hitting Mitrione, who is coming off a knockout loss of his own against Roy Nelson, it’s likely that the right game plan for De Fries would be to take it to the mat.

“I like my top game, but I’ll fight wherever it goes,” he said. “Every heavyweight in the division hits hard and if any of us big guys connect, you’re gonna send them down. So I’m just gonna mix it up, put it to him, and have a varied game and see what happens.”

And nothing would be better for the fighter formerly known as “S11” than to leave Sweden with a victory.

“It would be great to win,” said De Fries. “I’m coming off a loss, I want to get the win and I want to fight top ten guys sooner or later. I just want to go out there and have fun, and just get that feeling. When you win in the UFC, it’s the best feeling in the world.”