"What gets you respect in this sport is not just beating someone. It’s how you beat them. You’ve got to really show that you are
head and shoulders above someone." - Phil Davis 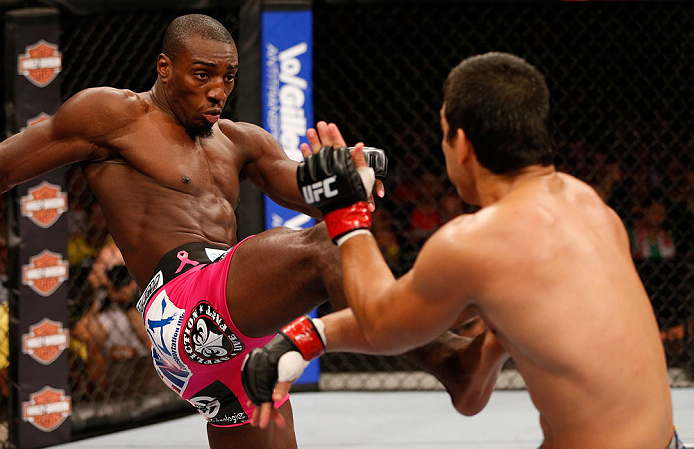 Phil Davis is not a man in a hurry. The way he sees it, the longer it takes for him to get a shot at the UFC light heavyweight title, the worse it’s going to be for the man holding the belt, because every day spent in the gym is another day “Mr. Wonderful” is getting better.

“I’m not a person that rushes into things,” he said. “I’m not trying to say I’m really good at a lot of things, but patience is one of the things I’m very good at. So is working hard, and it’s one of those things I think I’ve come to really appreciate from wrestling.”

A 2008 NCAA Division I champion for Penn State, Davis knows about the grind, knows about what it takes to be the best. And it’s not just hard work, but that patience.

“Being a wrestler, you start wrestling in September and the finals aren’t until March,” he explains. “The whole time you have to practice hard and be patient and wait until a big tournament. It’s a long season. So now, any day I spend in the gym is a day I spend learning and getting better. I put a lot of time in. When I got into the UFC, and I think the same thing is true now, everybody I fight has more experience and more time in the gym than me. What makes me competitive is that I’m getting quality reps, I’m working hard, and I’m a good athlete. Anytime I get to train on just technique, I’m going to take a huge leap in a short period of time, and I’m gonna come back and look twice as good. Everybody I’ve ever fought has had multiple years of experience on me, let alone fights, so any time there’s a layoff, I’m perfectly fine with that because I’m in the gym, working hard and getting better.”

The last time Davis graced the Octagon, he pulled off a close decision victory over Lyoto Machida in August of 2013. Eight months away is a long time, but as he puts it, “I’m in the gym and I’m stacking hours. This is all that matters to me. I know I cannot lose as long as I’m in the gym working hard and that’s something I know I can do.”

This Saturday, Davis is back for a UFC 172 co-main event bout against the returning Anthony “Rumble” Johnson. It’s a stellar matchup and one the Harrisburg native is taking very seriously.

“He (Johnson) is desperate to make a statement and regain all his fans that he lost when he left the UFC. He’s hungry to be back.”

Yet despite Johnson’s previous success in the UFC and the six-fight winning streak he’s put together since his last Octagon appearance in 2012, there are some with short memories, so if Davis does beat “Rumble,” will he get the respect he deserves for such a meaningful notch on his belt?

“What gets you respect in this sport is not just beating someone,” said Davis. “It’s how you beat them. You’ve got to really show that you are head and shoulders above someone. Not that you just beat them and squeak out a tough decision; sometimes you gotta do that. But when you can really take it to somebody without taking any damage in return, that says a lot more about you than just getting a win.”

Davis has put together wins like that over the course of his career, but with the addition of some rock-solid striking, it’s expected that more such victories will follow for the 29-year-old. And if they do, it’s because he’s added new wrinkles to his game without losing sight of what got him to the big show.

“I definitely want to wrestle, but what’s going to make my wrestling better is setting it up with strikes and making sure that guys respect me in every area of the game,” he said. “As soon as a guy fears my hands and my kicks, that’s it; he’s ready to lock up and wrestle with me.”

Then it’s usually a wrap. Yet what makes Davis truly dangerous is that he always plays to his strengths, not picking up the ‘wrestler’s disease’ that some former mat stars suffer from. What is this wrestler’s disease? The best way to describe it is that when a wrestler gets the opportunity to strike in MMA, that’s all he wants to do. Davis isn’t cut from that reckless cloth.

“Part of it is just not being a people pleaser,” he said. “Everybody wants the big knockout, but big knockouts won’t just come. You have to set them up with skill. Some guys have that big one punch knockout power, and it’s great to have that and everybody loves it when it works, but that won’t work every night, and the nights that it won’t work, things tend to go really bad for those guys.”

Davis hasn’t had many bad nights thus far in his career. In fact, he only had one, when he dropped a 2012 decision to Rashad Evans. Since then, he’s 3-0 with 1 NC, and the way he looks at matters, while a win over Johnson will help his cause in the light heavyweight title mix, he believes he already should be on that short list for a title shot.

“I beat two number one contenders, I finished one of them (Alexander Gustafsson) in the first round,” he said. “I sent a total of three top five guys down to middleweight. At this point, you’re not even a top contender until after you lose to me. You have to lose to me, and then I’ll let you be the top contender. Let me tell you something, I’ve sent more people to a lighter weight class than The Dolce Diet. It’s as simple as this: I will beat everybody in this division from bottom to top and I’ll take a title shot when a title shot is available. But the one thing that doesn’t happen: people don’t call Phil Davis’ name. They call out a lot of people; they don’t call out Phil Davis. And if one person called out Phil Davis, he’d stop calling. He hung up. He’s not on the phone no more.”