“If you’re only looking to beat people, ultimately the people will continue to change. I want to be the best me I can be." - Phil Davis 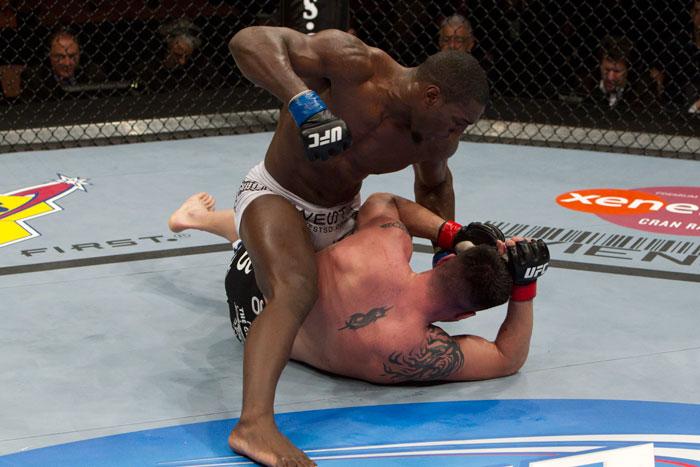 Phil Davis is fighting Rashad Evans on Saturday night. But it doesn’t really matter to Davis who stands across from him on fight night. It could be Evans, it could be “Shogun” Rua, it could be light heavyweight champion Jon Jones. He’s not concerned. They’re all just names to him.

“If you’re only looking to beat people, ultimately the people will continue to change,” said Davis. “I want to be the best me I can be. I don’t care who I’m gonna have to face. I just want to continue to prepare myself and advance my skills.”

It’s a philosophy grown from years in the wrestling room, a segment of his life that reached its peak in 2008 when he won the NCAA National championship for Penn State University. His next step was to attack the world of mixed martial arts, and while he hasn’t reached the peak of the mountain yet, he has not wavered in the belief system that took him to the top once already in wrestling.

“I’ve been a champion before, and the rules change and it’s a completely different sport, but the attitude is very much the same,” he said. “If you can’t master your own skillset and your own self, then it doesn’t matter who the other guy is or what the other guy is capable of doing. If you can’t be the best you, then he doesn’t even have to be the best. Sometimes you get caught up chasing this number one guy, and all of a sudden, that guy loses and you have to go against somebody else. So why have you been training to fight this guy the whole time?”

At this point, it’s safe to say that Davis hasn’t had a picture of Evans on his mirror ever since the two were scheduled to fight back at UFC 133 last August, a bout postponed when the Harrisburg, Pennsylvania native injured his knee and was forced to the sidelines.

“Not necessarily,” he chuckles. “As soon as you don’t have a fight, I’m back to focusing on me a hundred percent, and no one else. I do try to keep an eye on the division and who’s fighting who and how guys are doing. I attended the fight in August and watched him (Evans) fight Tito (Ortiz), and I was definitely checking him out and watching how he was doing. But not too much other than that.”

And as much as a knee injury and over five months on the sidelines can hurt a young fighter’s career, in this case, it may have been a blessing in disguise for the 27-year old, who was fighting at a breakneck pace since entering the UFC in 2010. Just 4-0 when he made his debut at UFC 109 against Brian Stann, Davis fought four times in 2010 and once in March of 2011 before getting injured. Yes, he was impressing fans and the media and winning all his fights as his level of competition kept getting amped up, but when he got injured, he finally had the time he needed to add some more skills to his still raw MMA game.

“When you fight four or five times in a year, you don’t really have time to get better,” admits Davis. “You’re just going from fight camp to fight camp and that’s not always good for someone as inexperienced as I am. So it has been great to just fall back for a little bit, and you can’t rush an injury, so I just had to work at a slow, steady pace until I got better, I picked up skills here and there, and now I’m right where I want to be.”

Yeah, as scary as it sounds, a guy who already has beaten Stann, Rogerio Nogueira, Alexander Gustafsson, and Tim Boetsch is getting even better. His timing is impeccable though, as this is without question the biggest fight of his career. Not that he’s getting caught up in all the hype of being the main event on FOX.

“This is just the next fight,” he said. “This is just another challenge along the road of me becoming a champion.”

Sounds convincing, and according to him, not getting rattled and not letting his ego run wild isn’t difficult at all.

“That’s the easy part as long as you’re true to yourself,” said Davis. “If you start to believe that you’re the best, baddest dude ever, and it all just comes so easy to you that you don’t have to work hard for it, then it’s hard to make new goals for yourself. But I know that things don’t come easy for me. If you forgot how you got to where you are, then you won’t make it to the next level. Even if you reached the highest point, there’s something else.”

Like the perfect fight? What would that entail for “Mr. Wonderful?”

“Minimal damage and a perfectly executed gameplan,” he said.

And what happens next?

“You make a new gameplan and prepare to carry that one out.”

So you can be perfect more than once?