Phil Davis: Preparing for a Great Night in Rio

"There’s no need to worry about whether a bad night will happen or not. I should just prepare to have a great night." - Phil Davis 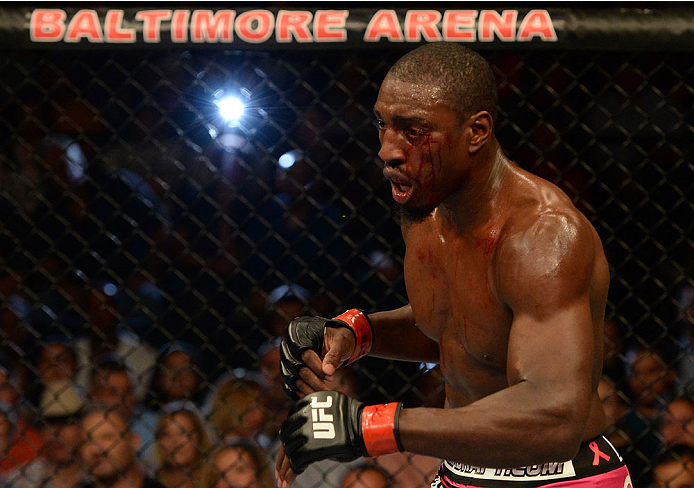 Every fight needs a hook. For his UFC 179 bout in Rio de Janeiro against Glover Teixeira, Phil Davis’ hook is that he’s looking to go 5-0 (1 NC) against Brazilian foes on Saturday; hence, he’s been dubbed “The Brazilian Killer.”

“I’m not gonna call myself a killer in any capacity,” Davis laughs. “But I guess if I’ve been dubbed “The Brazilian Killer,” then I have no choice in that matter.”

Well, “The Brazilian Beater” doesn’t really have a ring to it.

“Normally, alliteration does,” Davis quips, as quick with his wit as he is with his fists, and as a thinking man’s fighter, he is in tune to more than just the physical aspects of the sport. That can be helpful on fight night, or it could drive you crazy if you’re overthinking things and not reacting. That was likely the case in his first pro loss to Rashad Evans in January of 2012, but in his second defeat against Anthony Johnson in April, that was a physical thing.

“A lot of things went wrong, but more than anything, I just had a really bad night,” Davis, who lost a three-round decision to Johnson, said. “I was super flat. My body was just not up to perform the way I needed it to.”

The defeat snapped a four-fight winning streak, and though he remains in the light heavyweight top ten at number six and is in a co-main event slot this weekend, Davis’ hopes for a title shot against the winner of next year’s Jon Jones-Daniel Cormier bout have been put on hold for the moment. That’s the toughest part of this sport for a fighter, and perhaps the most intriguing for fans, the idea that all those weeks of training come down to one night under the lights, and if you’re off that day, it’s going to be a long night.

“It’s harder than finding a needle in a haystack,” Davis said. “It’s so hard. You train with good guys and you get tough training, and sometimes it seems impossible to make everything come together at the right time – your fitness, your overall health, your skill set. It’s hard to have everything ready for that night. But when it does, it’s an awesome thing.”

And when it doesn’t, like on April 26 in Baltimore?

“That is not the feeling you want to feel, I’ll tell you that.”

At this point in his career, that’s the only concern the 30-year-old Davis has when it comes to the fight game. Rankings, the opponent in front of him, the future opponents ahead, they’re all just part of the game, but not anything he can control. All Davis can do is hone his skills, get his game plan together, and go out and perform. He doesn’t even let the chants in Brazil of “Uh Vai Morrer” get to him. Well, not too much.

“I’d rather they didn’t, but people will be people,” Davis said, and when asked if his wrestling career at Penn State prepared him for the chants that proclaimed that he was going to die, again, not too much.

“Let’s be clear,” he said. “No one has ever threatened to kill me, except in Brazil. So I would definitely say Brazil is the worst. Probably the worst crowd in wrestling was Oklahoma State. They have a pretty loud, intense atmosphere there.”

Loud. Intense. Probably what Davis will experience again this weekend, but the way he sees it, if you fade in that kind of atmosphere, you’re not one of the best fighters in the world.

“When you’re able to pull out a tough win in that kind of atmosphere, that’s what separates your top performers from your average Joes.”

Phil Davis is no average Joe, he’s proven that already, both in the States and abroad. But is he on the verge of a return to the title picture with a big win over Teixeira?

“It all depends on this fight.”

And no more bad nights like the Johnson fight, right?

“There’s no need to worry about whether a bad night will happen or not,” he said. “I should just prepare to have a great night. And no matter what, I expect to win.”