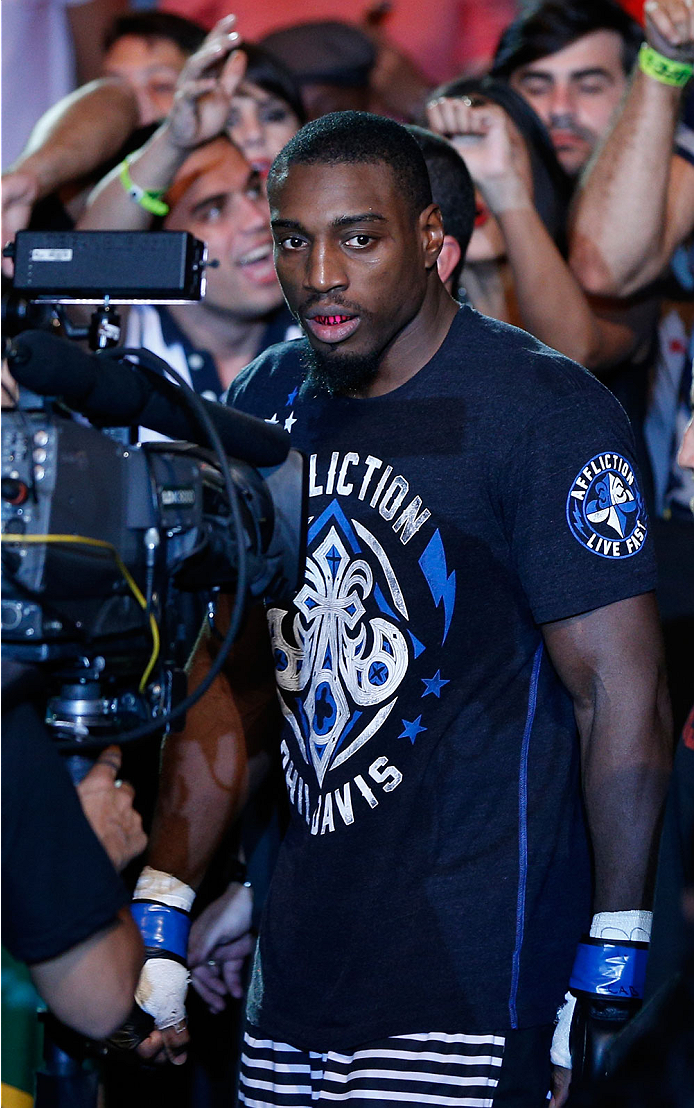 Phil Davis isn’t the sort to get rattled by much. He exudes a cool, calm and collected air that is rare in any walk of life, but particularly in pro sports. But don’t let the cool fool you; he is a human being, and as such, being asked about title shots and moving up the ladder and all that fun stuff over and over can get to him.

“It’ll wear you out if you let it,” he laughs. “I’ll get a title shot when I get a title shot. All I can do it continue to win and get better every single day in the gym. You have to worry about what you can actually control.”

It wasn’t always that way for “Mr. Wonderful,” who returns to the Octagon this Saturday night to face fellow light heavyweight contender Ryan Bader.

He laughs, but that can’t be easy, especially when you’re one of the top fighters in your division, someone in or closing in on your prime, and an athlete convinced that if he only got that shot at the gold, he’d nail it.

“It’s difficult, but that’s maturity,” Davis said. “There’s one thing that’s for sure about this sport – it moves very differently than a lot of other sports. There’s no set amount of wins that would be required for a title shot. You just have to be dogmatic in your approach towards being a champion. And that’s what I have to explain to people: eventually I’ll get there, I just have to take my time.”

The time might be coming sooner than he thinks. With champion Jon Jones expected to face the winner of Saturday’s main event between Alexander Gustafsson and Anthony Johnson, the space opens up for a new challenger to step up and face the winner of the next championship match. If Davis beats Bader, a fight against recent challenger Daniel Cormier would be an intriguing one, with the one emerging from that bout making a case for a title shot. Davis isn’t too interested in playing MMA math though. For him, this way of life was never about the money, fame or titles. And yeah, some fighters say the same thing, but when you hear Davis talk about it, you know he means it, though let’s not bring up the whole “doing it for the love of the game” thing.

“Let’s not say I’d do this for free,” Davis laughs. “But the value I draw out of it, out of just competing, is so much greater than what I could be paid.

“I truly love to go against other people, no matter what it is, and that’s such a unique thing because I don’t take a lot extrinsic motivation from winning money,” he continues. “Winning money’s cool, yeah, there’s stuff I want to buy, I want a new house, all of that. But at the same time, the thing that drives me is not money or this or that. The reason why I started wrestling, the reason why I continued to wrestle all these years – you don’t wrestle because you want to be rich and famous. You wrestle for some odd reason, and my odd reason was ‘I want to be better than you for no other reason than to say that I’m better.’ And that’s just it.”

So while he wouldn’t do it for free, if he was in some warehouse in the middle of nowhere with 20 people watching, instead of the 30,000-seat Tele2 Arena he will be competing in on Saturday, would it be the same thing for him?

“That’s pretty much what wrestling is like,” he said. “I fly across the world to some random place in a town in Ukraine or in Russia, and there’s this guy that’s supposedly training to wrestle you. You size each other up, you get on the scale, and then you throw down.”

It’s competition at its purest, and for Davis, that’s the point. You don’t hear about that too much these days in any sport, and as far as the Harrisburg native is concerned, that’s fine – different strokes for different folks.

“I can’t expect people to enjoy what I enjoy about sport, because we haven’t had the same life experiences,” he said. “At the same time, if you enjoyed the sport the way I enjoyed the sport, you’d probably work as hard as I do. It’s all about what drives you, and sometimes I feel like I see guys fight and they don’t quite run out of gas or power, but they get to the point where they’re getting beat up and they say ‘I think I sacrificed everything I’m willing to sacrifice, and this fight is over.’ But when you’re completely invested in winning - not the money, the fame or the glory, but just in getting your hand raised - you don’t run out. Time can run out, but you cannot run out. You’re still in that competition until the end.”