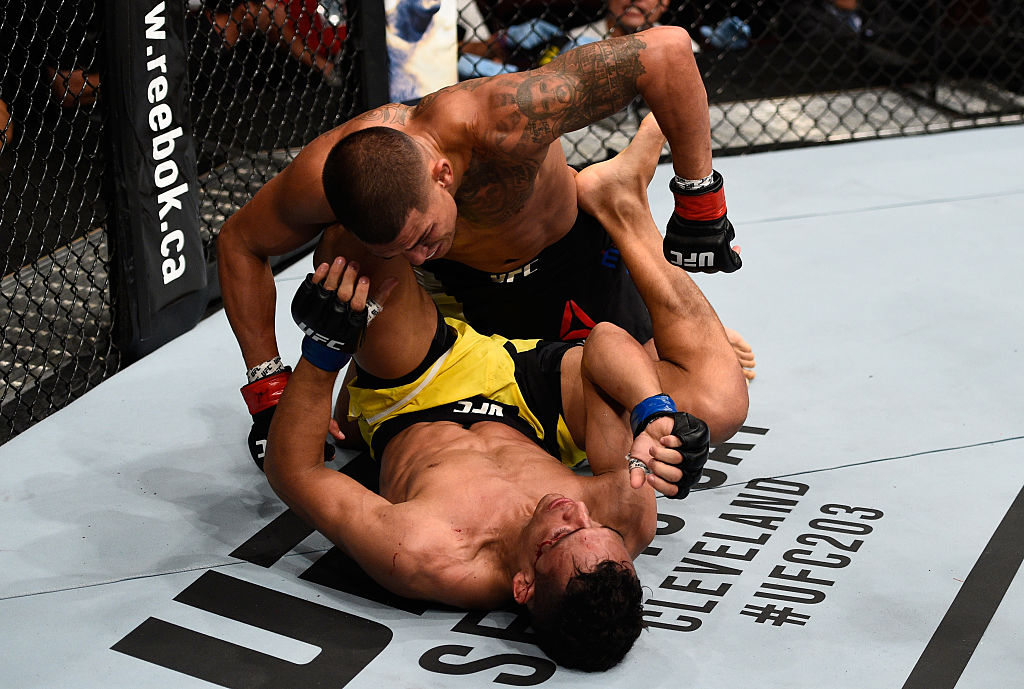 Former UFC lightweight champion Anthony Pettis got the fight of his life in his featherweight debut against No. 6-ranked Charles Oliveira on Saturday, but “Showtime” delivered the goods at Rogers Arena in Vancouver, submitting the Brazilian in the third round, snapping a three-fight losing streak in the process.

Oliveira immediately rushed Pettis into the fence, but Pettis’ takedown defense was strong. Yet as soon as the two broke, Oliveira wasn’t going to give him space to breathe, and he got the takedown the second time around. “Do Bronx” took Pettis’ back, but the Milwaukee native scrambled into the top position and rose to his feet. While standing, Pettis finally found room to operate, and his kicks to the body put Oliveira on the mat. Pettis tried to finish with ground strikes, but the Brazilian survived. Pettis kept the ground pressure on, but Oliveira scrambled and took Pettis’ back once more. Pettis worked his way out of trouble and worked his ground-and-pound attack, nearly stopping his foe before the round ended.

A failed takedown attempt by Oliveira started the second round, and moments later, Pettis nearly scored with a head kick. The two proceeded to trade punches and kicks, Oliveira doing well in the exchanges. Just past the midway point, Oliveira jumped up and took Pettis’ back, dragging his foe to the mat. After some dicey moments, Pettis turned and got free, and the exchanges continued until Oliveira ended the frame with a takedown.

Oliveira put Pettis on his back to start round three, but the reverse from the former champion followed soon after and, suddenly, Pettis shot into action. As the two scrambled, he locked in a guillotine choke, with Oliveira tapping out at 1:49 of the third and final round. 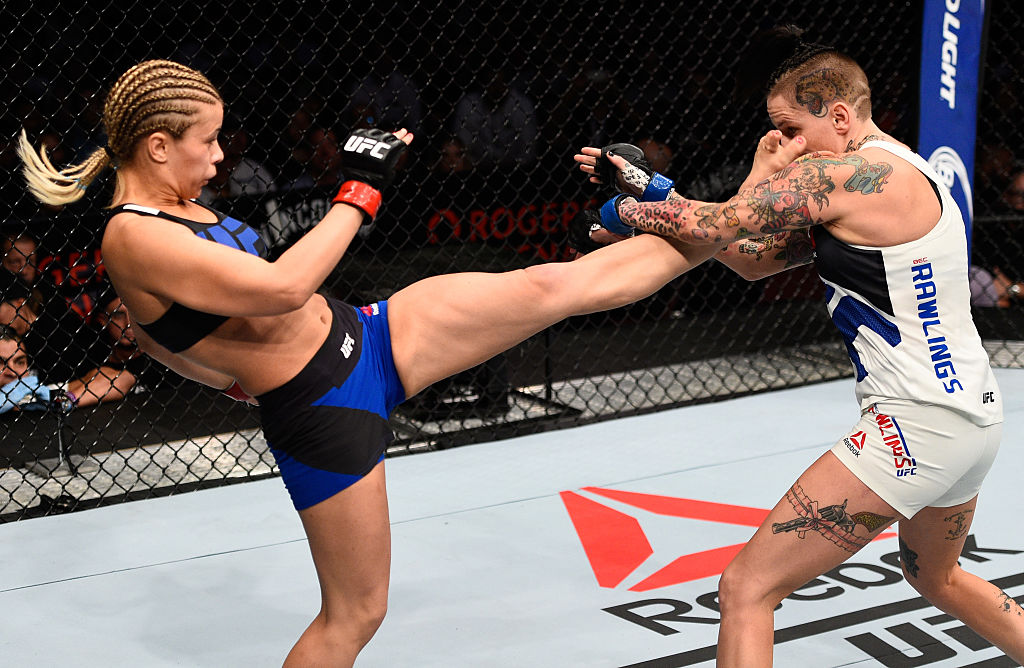 Anyone who thought that No. 10-ranked strawweight contender Paige VanZant had left her fight game on the dance floor was mistaken, as the “Dancing with the Stars” runner-up returned to the Octagon for the first time since December of 2015 with a highlight-reel knockout of Bec Rawlings.

VanZant used her movement throughout the first round, trying to lure Rawlings in, but the Australian won the inside exchanges effectively. In the second round, VanZant didn’t waste any time with such strategies, as she scored with a jumping left kick to the head that put Rawlings down to the mat. A series of unanswered hammerfists followed, prompting referee Dan Miragliotta to halt the bout 17 seconds into round two.

With the win, Sacramento’s VanZant moves to 7-2; Brisbane’s Rawlings falls to 7-5. 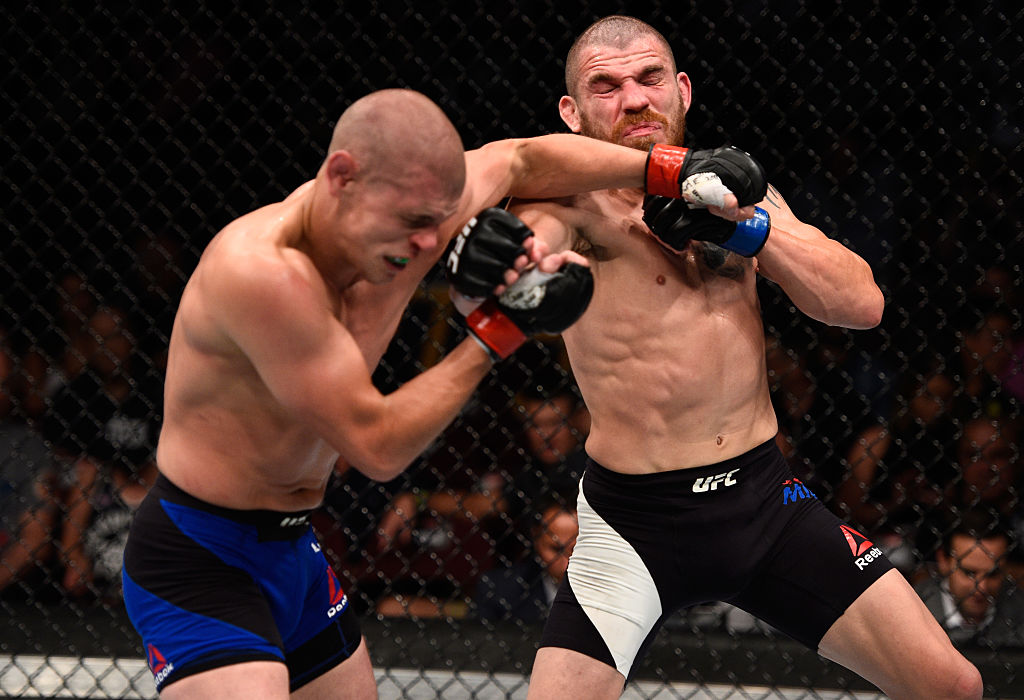 Lightweight veterans Jim Miller and Joe Lauzon delivered another action-packed war in the main card opener, and the result was the same as well, as Miller scored a hard-fought three-round decision victory.

The fists started flying immediately, Miller jarring Lauzon briefly with a left hand. Lauzon shot in and tried to lock up Miller’s leg, but the ensuing scramble saw New Jersey’s Miller escape and get upright. Lauzon remained aggressive, Miller countering well, with a knee to the head the biggest blow. With a little over two minutes left, Miller missed a spinning elbow and fell to the canvas, Lauzon pouncing on him. After Lauzon scored with some ground strikes, Miller scrambled back to this feet and continued landing hard bows to the body and head as the round closed.

The two took turns teeing off on each other in round two, Lauzon starting strong and Miller answering, but a caught kick by Lauzon allowed him to put Miller on his back for a second time. Both fighters traded elbows on the mat, but Lauzon kept positional control until the horn sounded.

Staying aggressive to start round three, Miller appeared to rattle Lauzon and he upped his work rate even higher. But Lauzon shook off the barrage and resumed his forward motion, eventually getting Miller to the mat once more. After a spell on the ground, Miller found daylight, but by the end of the round, Lauzon had the upper hand on the mat again, nearly sinking in an armbar before the end of the fight.