Flyweight contender Sergio Pettis made it two straight in the Octagon Saturday with a three-round unanimous decision over Chris Kelades at the MGM Grand Garden in Las Vegas.

Pettis’ movement and varied striking attack proved troublesome for Kelades, who couldn’t close the distance or have any sustained offensive success against the Milwaukee native in the first round.

Kelades did get the fight to the mat as round two opened, but Pettis was able to sweep his way into the top position and then to his feet. Kelades kept the pressure on, and while he began scoring, Pettis was still a step ahead. The fight was getting closer, but Pettis made sure he took care of the business in the third, wrapping up his hard-fought but clear-cut win. 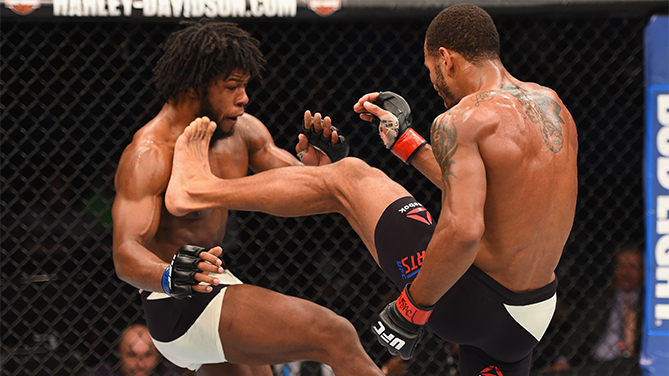 London’s Danny Roberts had to dig deep to get the win against Dominique Steele, but he got the nod in the exciting welterweight bout, taking a close unanimous decision.

An early right hand by Steele hit the mark and put Roberts on the mat, and a slam soon followed. Roberts got himself out of immediate danger, and with three minutes left he got back to his feet. Soon after, Roberts briefly stunned Steele with a left hand, but the Ohio native locked up with his foe before the Brit could follow up. Another slam by Steele put the ball back in his court, and he stayed in the lead to the horn.

The fast pace didn’t let up in the second round, with Steele doing great work in the clinch, but Roberts getting off several good combinations with his fists and feet from long range.

Roberts’ first left hand of the final round jarred Steele, but Steele evened the score with a takedown. Roberts stayed busy, working himself upright and free from the clinch. With a little over a minute left, the two somehow found the energy for a heated exchange, and as they battled against the fence in the closing seconds, it was Steele landing with some more hard knees, capping off the grueling three-rounder. 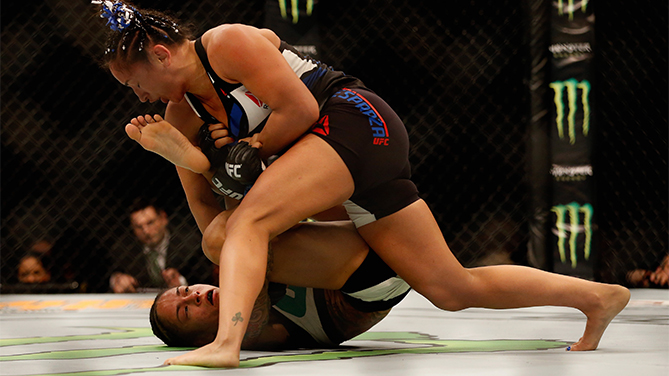 Former UFC strawweight champion Carla Esparza made a triumphant return to the Octagon after a 13-month layoff, winning a three-round unanimous decision over Juliana Lima.

All three judges saw it 30-27 for Esparza, who was fighting for the first time since losing her title to Joanna Jedrzejczyk in March of 2015.

After a tentative opening from both fighters, Lima closed the distance and went for a takedown, but after coming up short, it was Esparza getting the fight to the mat. Lima stayed busier from the bottom position though, as she searched for submissions and fired off up kicks.

Esparza got the fight back to the mat early in round two. This time, Esparza was more active, and it wasn’t until the final minute that Lima was able to get to her feet and do some scoring on her now bloodied foe.

Not straying from the game plan, Esparza kept utilizing her wrestling to ground Lima and keep the fight in her wheelhouse in round three, and while Lima swept her way into the top position in the closing stages of the bout, it was too little too late. 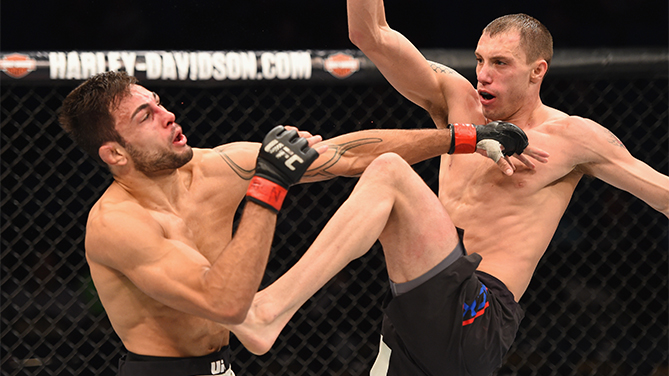 It didn’t take long for Franca (14-4) to get the fight to the mat, but Vick worked his way to the fence and then to his feet. Another takedown followed almost instantly though, and this time the Brazilian kept Vick grounded for a longer time. And while the control of the bout was firmly in Franca’s corner, he wasn’t able to do anything with it, and after the two stood a second time, Vick took over for a spell with some hard punches and kicks until a third takedown by Franca in the final minute.

The start of the second round was delayed as the Octagonside physician checked Franca out after an inadvertent eye poke from round one, and while the Brazilian was cleared to continue, Vick began landing more and more with his power punches. Franca responded with another takedown, but after Vick rose, the Texan continued putting on a boxing clinic.

It was more of the same in the final round, Vick sticking and moving as he dominated the action. And though he didn’t step on the gas in an attempt to finish the bout, it was an impressive effort nonetheless for Vick, who moves to 9-0.