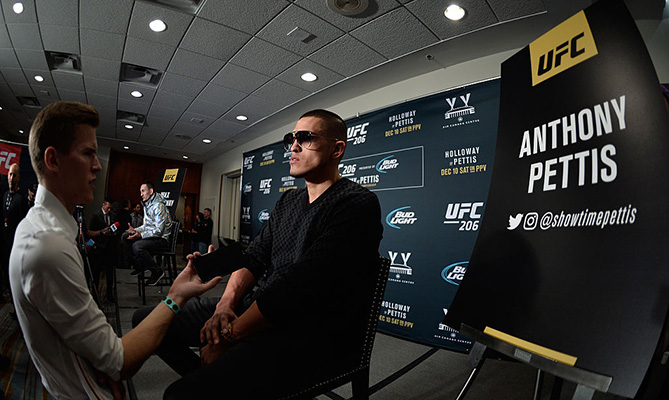 Anthony Pettis missed weight by three pounds Friday ahead of his second attempt to make the featherweight limit.

The former lightweight champion will still face Max Holloway in the main event of UFC 206. If Holloway wins he will be the interim featherweight champion, but Pettis forfeited his opportunity to win the interim belt. Pettis will be fined 20 percent of his show money that will now go to Holloway.

Both Holloway and Pettis were elevated to the main event when light heavyweight champion Daniel Cormier was forced to pull out of his scheduled title fight with Anthony Johnson two weeks before UFC 206.

Pettis had brought in a weight management specialist specifically for his camp. Louis Giordano has been living with Pettis for six weeks to help him prepare for the cut.

If Holloway is victorious he guarantees himself a title shot against undisputed featherweight champion Jose Aldo, who was promoted to that position after former champ Conor McGregor relinquished his title after winning the lightweight belt.

In other news, Valerie Letourneau missed the strawweight mark and came in at 117.5 pounds for her bout with Viviane Pereira. Rustam Khabilov missed weight by two and a half pounds (158.5) for his scheduled bout against Jason Saggo. Both fighters will lose 20 percent of show money and it will go to their opponents.