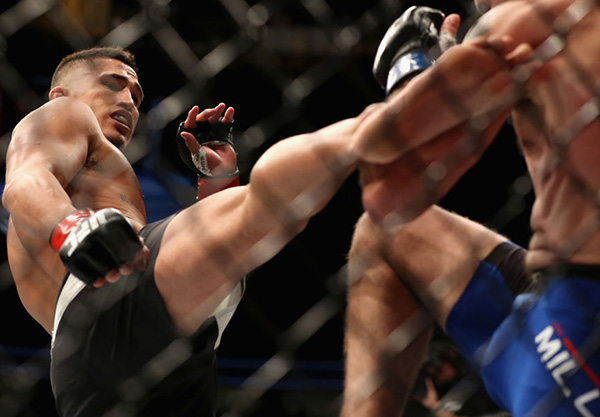 Anthony Pettis kicks Jim Miller in their lightweight bout during the UFC 213 event at T-Mobile Arena on July 8, 2017 in Las Vegas, Nevada. (Photo by Christian Petersen/Zuffa LLC)" align="center" /> Anthony Pettis is pretty candid about the 19-month stretch that saw him go from the top of the lightweight division to getting finished for the first time in his career on a frosty December evening in Toronto.

“It was kind of a scary moment,” said the former lightweight champion of the three-fight skid that sent him down to the featherweight division. “You lose three in a row and I wasn’t used to losing – I had barely lost, so three in a row was a sudden shock and a sudden change.”

Through the first 20 fights of his career, the Milwaukee native only lost twice – once by split decision to Bart Palaszewski in the WEC and then again to veteran Clay Guida in his UFC debut. He bounced back from the loss to Palaszewski by winning the WEC title in the final bout in the organization’s history, punctuating his performance with “The Showtime Kick” before replicating the feat in the UFC as well.

Both times it took him four fights to reach the top of the division and both times he defeated Benson Henderson to get there, but this time around, the first loss was followed by a second and then a third and the former champion was left scrambling.

While he was successful in his featherweight debut, the cut to 145 pounds was daunting and he failed to make weight for his interim title clash with Max Holloway at UFC 206. Not only did the stoppage loss send him back to the division he once ruled, but it also prompted Pettis to take some time off in order to rebuild his body, reconnect with his long-time coach Duke Roufus and recommit himself to the strong fundamentals that served as the foundation for his flashy style and previous title reigns.

There was nothing remarkable about the performance – it was a solid all-around effort against a gritty veteran and exactly the type of fight Pettis needed in order to officially hit the reset button on his career.

“Jim Miller is a tough guy – he’s been a journeyman and fought some of the best in the division – but we just wanted to get that ‘W’ and look good doing it,” said Pettis, who returns to the cage this weekend in search of a second straight victory against fellow WEC alum Dustin Poirier. “I think I outclassed him on the ground, outclassed him on the feet. I hurt my hand in the fight, so I couldn’t finish him the way that I wanted to, but I adjusted, started working the left hand and the jab more. It was a good fight.”

Listening to Pettis reflect on his past struggles and this weekend’s main event assignment against Poirier, it’s clear the former lightweight champion is ready to put that chapter of his career behind him and focus on what lies ahead. 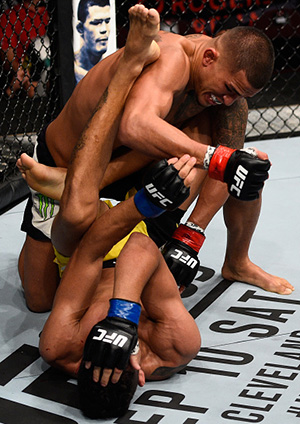 Charles Oliveira of Brazil in their featherweight bout during the UFC Fight Night event at Rogers Arena on August 27, 2016 in Vancouver, British Columbia, Canada. (Photo by Jeff Bottari/Zuffa LLC)" align="right" />He doesn’t make any excuses and tackles every question head-on, but he also makes sure to remind you that it’s not like he was losing to a bunch of scrubs.

“Everybody I’ve fought has been at the top of the division,” he said. “If you look at my losses, Max Holloway is the champion and everybody else is right there in contention, next in line or was the champion. They’re not giving me weak guys.

“Everybody that fights me comes with their ‘A’ game. Nobody shows up to fight Anthony Pettis and they’re barely taking me seriously. Everybody knows this is their chance to go to the next level in their career. You beat me and you’re right there and so I have to be at the other end of that, win these fights and put myself in that position.”

And after getting back into the win column against Miller in July, he’s looking to improve on that performance this weekend against Poirier and take another step in what he hopes is a journey back to the top of the lightweight division.

“I had a great camp for the Jim camp and this camp, I’m feeling even better than ever and now that I’ve got that win under my belt, I feel like this time I’m going to go out there and look for the finish.”