Pettis' Life Has Been A Fight

“I think my life’s been a fight,” he said. “Everybody knows my story and how I grew up, and these trials have to happen to see how strong you really are. And I’ve never thought about quitting once."
By Thomas Gerbasi • Mar. 22, 2019

It’s early morning in Nashville, but Anthony Pettis is happy. Happy to be making the media rounds a month and a half before his bout against Stephen Thompson, and even happy to be fulfilling these obligations next to the man he’ll be throwing hands with this Saturday in Nashville.

“He’s a hard guy not to like,” said Pettis of Thompson. “We have a very similar story. We come from a traditional martial arts background, and he’s had some success in mixed martial arts with that style, so I think we’re similar fighters.”

They also look at the sport the same way these days. “Wonderboy” has always been a positive guy. Pettis had to regain that love after some tough times, but it’s back.

“At this point in my life, I’m still training, I’m still having fun, and even doing this tour, I’m in Nashville, I’m a main event and I’m going from radio show to radio show. It’s a great life.”

To make it back to this place is an accomplishment in itself for Pettis. When he stunned the world with his “Showtime” kick off the fence against Ben Henderson in their 2010 WEC bout, he was expected to be the sport’s next big thing. And after an upset loss to Clay Guida in his UFC debut in 2011, he lived up to those predictions, with blistering knockouts of Joe Lauzon and Donald Cerrone leading to a submission of Henderson in their 2013 rematch that earned him the UFC lightweight title.

A coaching stint on The Ultimate Fighter, the cover of a Wheaties box and a win over Gilbert Melendez followed.

Then it all fell apart. The loss of his title to Rafael Dos Anjos in 2015 began a three-fight skid, and all of a sudden, Pettis wasn’t just in a tough spot careerwise, but what got him into the sport in the first place was disappearing rapidly.

“I wasn’t used to losing,” he said. “I never lost like that – I was the invincible dude.” 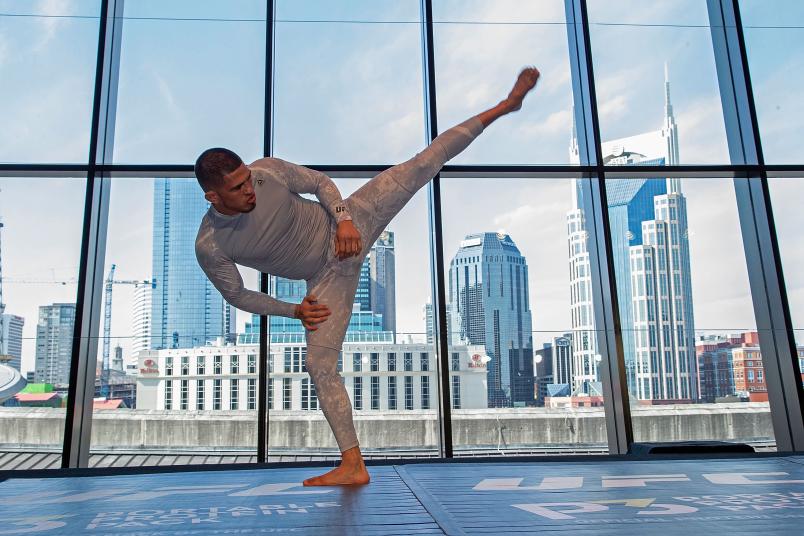 NASHVILLE, TENNESSEE - MARCH 20: Anthony Pettis works out at at the Country Music Hall of Fame and Museum on March 20, 2019 in Nashville, Tennessee. (Photo by Frederick Breedon/Zuffa LLC/Zuffa LLC)

NASHVILLE, TENNESSEE - MARCH 20: Anthony Pettis works out at at the Country Music Hall of Fame and Museum on March 20, 2019 in Nashville, Tennessee. (Photo by Frederick Breedon/Zuffa LLC/Zuffa LLC)

This sport will change that fast, but Pettis has fighting in his DNA, and he kept pressing, hoping success would change his outlook. He tried featherweight, but that didn’t work. A return to lightweight in 2017 was next, and while he’s split four fights, those four fights included two Fight of the Night bonuses and one Performance of the Night check. Most importantly, they included the fun again.

“I took a step back and looked at everything,” he said. “I thought about where I was at mentally and remembered the training camps behind the fights – I watched all my losses and I broke them down, studied the camps, and I just had some bad luck. The Max Holloway fight, my cars get blown up seven weeks before the fight. The Dustin Poirier fight I get a cut four weeks before the fight and I can’t spar for the rest of the camp. Little things weren’t adding up for me, but I’m not gonna stop until I get back to where I want to be at.”

What Pettis wants is another world title, and in the process, he only wants big fights. That next fight is a literal big one, as he will fight at 170 pounds for the first time in the UFC against the No. 3-ranked Thompson.

“I always wanted to fight at 170 at some point,” said Pettis, who did fight at welterweight on the regional circuit before making his WEC debut. “I tried the ’45 cut and that’s something I never want to do again in my life. But now, especially for a guy like ‘Wonderboy,’ it’s an intriguing fight for me and I think I have the style and I have the skillset to beat the guy. I know how to beat the guy, and I saw that he was waiting for an opponent for a long time and I was in talks with my manager about fighting at 155 pounds, but I didn’t like the names and the options they were giving me. I’m fighting up, not backwards, so I said let’s take ‘Wonderboy.’ I took a chance, put it on social media, and here we are, the fight came through.”

For any fan of the art of striking, this is a dream fight, plain and simple. And credit goes to both men for taking it. There are high expectations, though. So high that even the hint of a takedown will be a disappointment.

“I’m not looking for any,” insists Pettis. “I’m looking to strike.”

Music to our ears, and facing a fellow striker on the sport’s biggest stage was music to Pettis’.

Did he wonder if he was ever going to feel like this again?

“Most definitely,” Pettis said. “I think for a second I was so caught up in how I become a champion again and I forgot to enjoy the process. Even the (Tony) Ferguson fight, it didn’t go my way, but I had a blast. That wasn’t my best performance either. That was me on a five-week training camp. That was a last-minute fight they put together and I said, ‘Let’s go do it.’”

“Let’s go do it.” It’s the mantra Anthony Pettis is living by again, and while he’s already written a compelling story, the next chapter might end up being better than the first.

“I think my life’s been a fight,” he said. “Everybody knows my story and how I grew up, and these trials have to happen to see how strong you really are. And I’ve never thought about quitting once. I definitely thought that the joy and the love wasn’t the same, but it’s come around. I’m 32 years old and I feel like I’m the hungriest I’ve ever been. I’m watching film, I’m studying, I’m waking up early and I feel like I’ve matured now. As a young kid, I was out there not even knowing what I was doing and I became who I was really quick. I was a world champion, Wheaties box, and all that stuff and I didn’t know what I was doing. I have way more skills at my age now, way more knowledge, and this time around, I’m gonna hold this belt.”