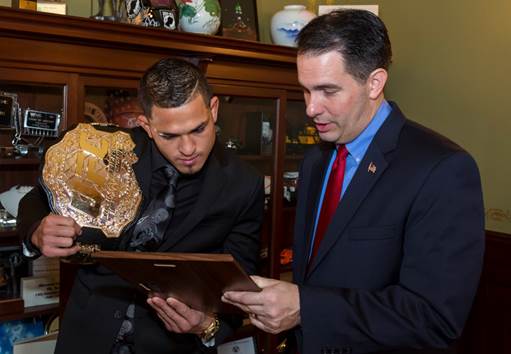 Madison, Wisc. – In honor of his success in the Ultimate Fighting Championship®, UFC lightweight champion Anthony Pettis received a Certificate of Achievement from Scott Walker, Governor of the state of Wisconsin, during a ceremony today at the Governor’s office in Madison.

Pettis, 26, is a lifelong Milwaukee resident who captured the UFC lightweight title in front of his hometown crowd at the BMO Harris Bradley Center in August. The former WEC lightweight champion, Pettis was also recognized for his charitable and community efforts in the state of Wisconsin.

“It’s great to see people from Wisconsin living out their dreams,” Governor Walker said.  “Anthony Pettis’ strong work ethic and tenacity made him a champion, and I am pleased to congratulate him on his championship.”