Even though it was nearly six years ago, Anthony Pettis still remembers his first major title fight against Benson Henderson like it was yesterday. More importantly, he remembers what led to that 2010 bout for the WEC lightweight title.

“Man, I remember being excited and nervous and those familiar feelings are coming back now,” Pettis said as he awaits his UFC 206 main event against Max Holloway for the UFC featherweight crown. That may be the best sign of all for “Showtime,” who parlayed those feelings six years ago into the WEC title and highlight reels everywhere thanks to the kick off the cage that put a stamp on his decision win.
RELATED: Free Fight - Pettis vs Joe Lauzon | Matchmaker breaks it down on Watch List | Inside the Octagon breaks it down

There have been plenty of ups and downs since then, including a long wait for a crack at the UFC lightweight title, winning that title, getting the cover of a Wheaties box, and then losing the belt and two subsequent fights before resurrecting his career in the 145-pound weight class in 2016. The rollercoaster ride has had many wondering just what’s going on with the talented Milwaukee native who seemed destined for greatness. He’s had those same thoughts.

“You know what, I’ve been sitting down with my coaches and everybody trying to figure that out and the more I think about it, the more it gets into my head, so I stopped thinking about it,” he said. “I lost the fights, and the stuff I did wrong I did to myself. I was tentative, I wasn’t taking risks, and I just wasn’t ‘that’ guy. To be that guy again, I’ve got to build a winning streak. The UFC’s giving me a path to build a winning streak and a title shot at the same time, so I’m gonna take full advantage of it and I have nothing to lose in the situation.” 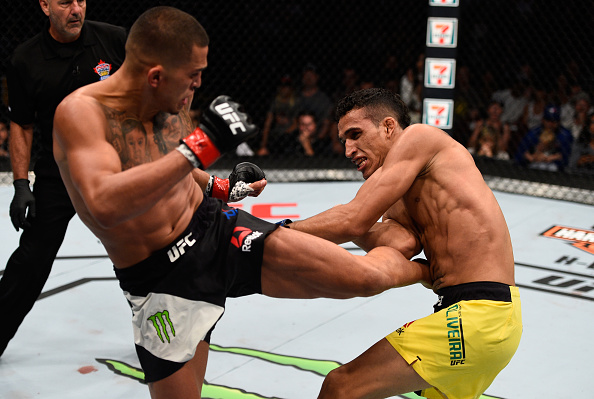 After his first featherweight win over Charles Oliveira in August, Pettis was matched up with Holloway in an intriguing co-main event in Toronto. Then Daniel Cormier was forced out of his light heavyweight title defense against Anthony Johnson due to injury, and an intriguing co-main event got even more interesting as it moved to the headlining slot and got an interim featherweight title added to the mix as well. Pettis, already excited about fighting Holloway, is even more amped up about fighting to become just the fourth fighter in UFC history to win titles in two weight classes.

“I fall asleep at night just thinking about the opponent, how I cannot mess up and about not letting people down,” he said. “I think that’s all that needs to happen for me to go out there and do this. You’re obsessing over your opponent, and then when the fight happens, seeing it so many times in your head and in your dreams, it’s familiar territory.”

And if anyone believes that having three of his cars set on fire in his driveway by unknown assailants in October has been a distraction, dealing with adversity is also familiar territory for Pettis.

“I’ve been through so much crap in my life that I got past it quick,” he said. “I definitely took some time, thought about it, tried to figure out who it was or what it was, and all I can do is move forward. Initially, it was shock, like ‘What the hell happened?’ and my daughter sleeps in my house. And then the next thought was that the best revenge is success. That’s a quote I live by and that’s what I’m gonna do. I’m gonna go out there and not let it hold me down.”

It sounds like the 29-year-old Pettis is planning on leaving his 20s behind with quite the party this weekend, one that will celebrate a championship and a new life in the featherweight division.

“I feel like I was chasing a ghost at 155 pounds, and now here at 145 pounds, it’s a whole different ballgame,” he said. “I’m the bigger guy, I’m the more experienced guy, I’ve got the tools to run this division, and that’s what I’ve got to do. Just stay on track, stay focused, I have a great team all around me, and just keep building. It’s one fight at a time, and I’ve got to keep pushing.”

If he does that, he may enjoy winning this championship more than the first one.

“Hell yes,” Pettis laughs. “And the fact is that I know what to do with it this time. The first time around, it was new for me, I was making mistakes and learning along the way. This time, I know what I have to do."