Co-Main Rematch vs Aljamain Sterlings Saturday At UFC 273 Carries Some Strong Feelings With It
By E. Spencer Kyte, on Twitter @SpencerKyte • Apr. 5, 2022

There are plenty of times where even the most bitter rivals develop a begrudging respect between one another; an appreciation for that the other does, forged in the fires of competition, and carried forward once the tensions between the two parties have simmered.

But don’t expect that to be the case when it comes to Petr Yan and Aljamain Sterling, the tandem bantamweight titleholders who renew their hostilities this weekend in a championship unification bout that serves as the co-main event at UFC 273; at least not as far as the Russian firebrand is concerned.

“I don’t respect him as a human being, nor as a fighter,” said Yan when asked if there is any respect that accompanies the hostility he feels towards Sterling.

The build to their initial meeting at UFC 259 was largely uneventful; a little of the standard trash talk and dismissal of the other man’s skills, promises of victory and the like, but nothing as pointed and sharp as Yan’s comment above.

But the way that first bout ended — with Yan blasting Sterling with an illegal knee and being disqualified, losing the bantamweight title because the challenger was unable to continue — and then having to wait more than a year for the rematch to finally come together has turned the intensity on the rivalry up to the point that its blown the speakers.

And while Sterling has been complimentary of his rival’s skills in the build to Saturday’s second act, the interim champion has no interest in returning the kind words.

“It will feel good to put my hands on him and hurt him; it’s about time he will pay for everything he said,” Yan said, clearly bothered by the war of words that has been going on between the two since last March.

The public bickering between the two hasn’t been persistent, but more like sporadic showers, with periods of escalation leading into Saturday’s contest and back in October, when Sterling did not receive medial clearance to compete in a rematch, leading to Yan facing and defeating Cory Sandhagen in a bout for the interim title he carries with him into this weekend’s battle.

As much as he was chomping at the bit to face Sterling and put this feud behind him, the opportunity to face another elite competitor like Sandhagen allowed the 29-year-old Russian to deliver another statement performance. He outworked the Elevation Fight Team member over the course of the 25-minute contest, earning 49-46 scores across the board and answering any remaining questions anyone have still had about how he matched up with Top 5 talent.

“Since Sterling didn't show up, it was important for me to step inside the Octagon against the best available opponent and show that I'm the best in the division,” he said of squaring off with Sandhagen, who was a quarter-step behind Yan for much of the fight. “Everything went according to plan that night and I didn't even have to use the maximum of my abilities.

“I could've gone 10 rounds that night, I felt that good.”

The victory made a rematch with Sterling inevitable — not that the duo wouldn’t have pushed to face each other regardless of the outcome of that contest — and the five months and change since Yan’s victory in Abu Dhabi have been largely committed to preparing to punish the New York native on Saturday.

“I will make sure to send him back to the prelims,” Yan said when asked if this weekend’s second meeting with Sterling will be the end of the series or part of a larger series between the bantamweight standouts. “This is the last time he is fighting on pay-per-view.

“I want to inflict as much damage as possible before I get my hand raised,” he added, offering his vision of how this weekend’s bantamweight title fight plays out.

As for what he learned from the first fight?

“I took my time to read the rules; it will help me have greater success this time.” 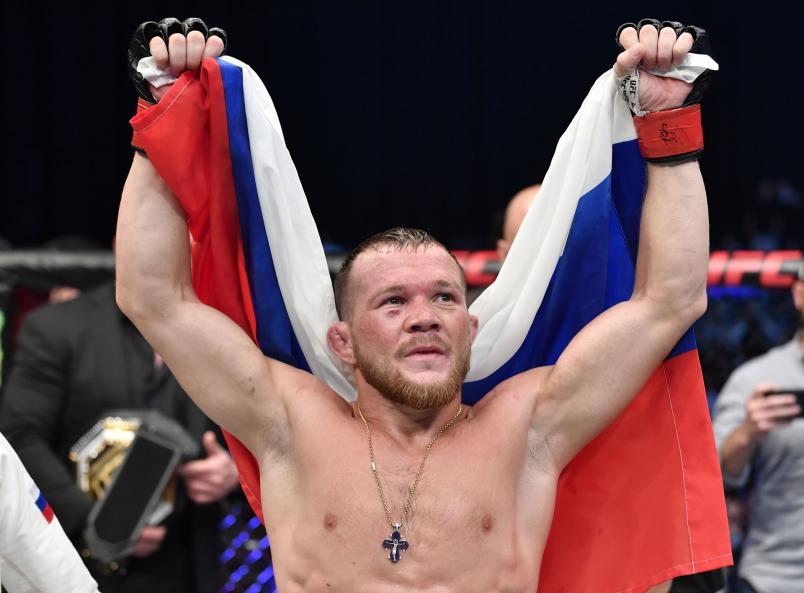 Petr Yan of Russia celebrates after his victory over Cory Sandhagen in the UFC interim bantamweight championship fight during the UFC 267 event at Etihad Arena on October 30, 2021 in Yas Island, Abu Dhabi, United Arab Emirates. (Photo by Chris Unger/Zuffa LLC)

And when the smoke clears after Saturday night, Yan will simply move on to the next challenge.

“I'm never focused on the past,” he said when asked if the tensions between he and Sterling with carry over beyond this weekend. “I will beat him up and forget about him, just like I forgot about everyone else I beat before.”

While there are numerous potential options to fill the position of Yan’s next challenger should he emerge victorious this weekend and begin a second reign as the undisputed bantamweight champion, the icy standout from Siberia will leave all of the particulars up to the UFC brass.

“I don’t pay much attention to the division,” he said in response to a question about potential future opponents that may have caught his eye. “I’m focused on myself.

“And right now, I’m only focused on this fight.”