UFC Bantamweight Champion Petr Yan Is Excited For His True Reign Over The Division To Begin With His First Title Defense Against Aljamain Sterling At UFC 259.
By Gavin Porter, On Twitter @PorterUFCNews • Mar. 5, 2021

But there is something about trash talking and about competing in the Octagon that brings out a different side of him. That’s when “No Mercy” lives up to his moniker.

On Saturday, Yan will look to successfully defend to his title at UFC 259. Standing across from him will be Aljamain Sterling, who earned a title shot after an impressive run through the stacked bantamweight division. With the “Funk Master” set firmly in his sights, Yan has welcomed any and all opportunities to verbally spar with his opponent.

And when you bring up trash talking, the bantamweight king cracks a sly smile.

“As you can see, I’m smiling,” Yan told UFC.com during his media availability in the UFC APEX. “Rivalries begin not only in the Octagon; it starts way before, but we also have to fight and I have some certain feelings toward my opponents.”

That doesn’t mean that Yan doesn’t respect Sterling or that he doesn’t see Sterling’s skillset as dangerous. Despite the hostility that we’ve seen between the two on social media, Yan set the record straight at the UFC 259 pre-fight press conference.

“I don’t have any conflict with him; I just want to beat his curly head,” Yan said before later adding that he isn’t going to get sucked into mind games with his opponent. “To be honest, I’m not really noticing him, not even at the press conference. He doesn’t seem visible to me.”

The 28-year-old champion’s confidence has been backed up by incredible performances against John Dodson, Jimmie Rivera, Urijah Faber and Jose Aldo. His rise to the top was a quick one, as it took him just seven fights to leave the Octagon with a gold belt wrapped around his waist.

In those performances, fans saw a relentless fighter who used his pressure and boxing to overwhelm opponents until they broke. In Sterling, Yan faces a different challenge than he’s come across so far in the UFC.

Sterling, while being a well-rounded fighter, excels in grappling, especially when the fight hits the canvas. We haven’t seen Yan go into deep waters with a wrestler and we haven’t seen him on his back often. 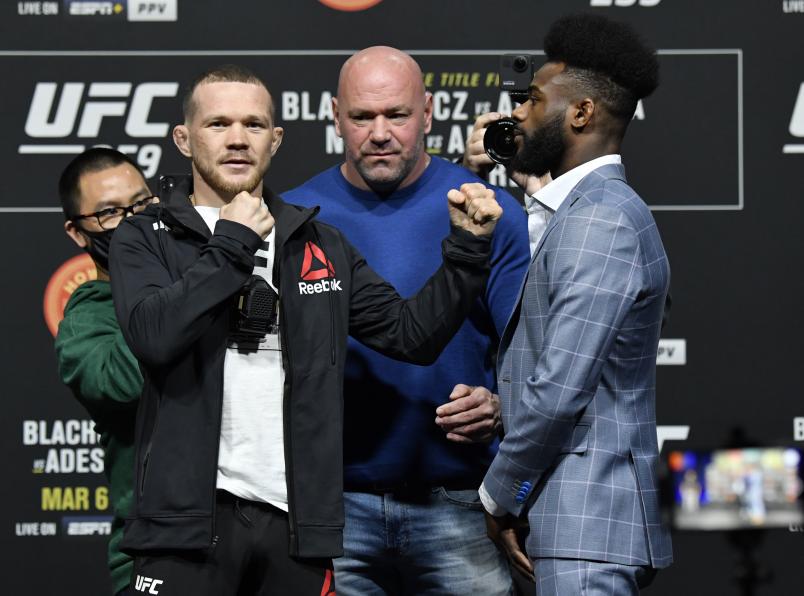 Petr Yan of Russia and Aljamain Sterling face off during the UFC 259 press conference at UFC APEX on March 04, 2021 in Las Vegas, Nevada. (Photo by Jeff Bottari/Zuffa LLC)

He knows that Sterling will rely on wrestling and he’s prepared for whatever the New Yorker throws his way.

“I think [taking me down] is his real game plan. He’s going to go for takedowns, but he’s not just going to shoot, obviously. He’s going to set up his takedowns with strikes and I know what he’s going to do, and I know what I have to do to beat him,” Yan said. “Sterling is the number one contender, and he deserves to fight for the title. By beating him I will cement my place here for a long time.”

The Yan-Sterling matchup will be the third bout on a massive UFC 259 PPV card that also features Amanda Nunes versus Megan Anderson and Israel Adesanya moving up to challenge Jan Blachowicz for his light heavyweight title. It’s just the seventh UFC event to have three title fights, the last of which was UFC 251, where Yan defeated Aldo to win the bantamweight title.

The moment has never been too big for Yan and he welcomes the bright lights that come with such a big event. 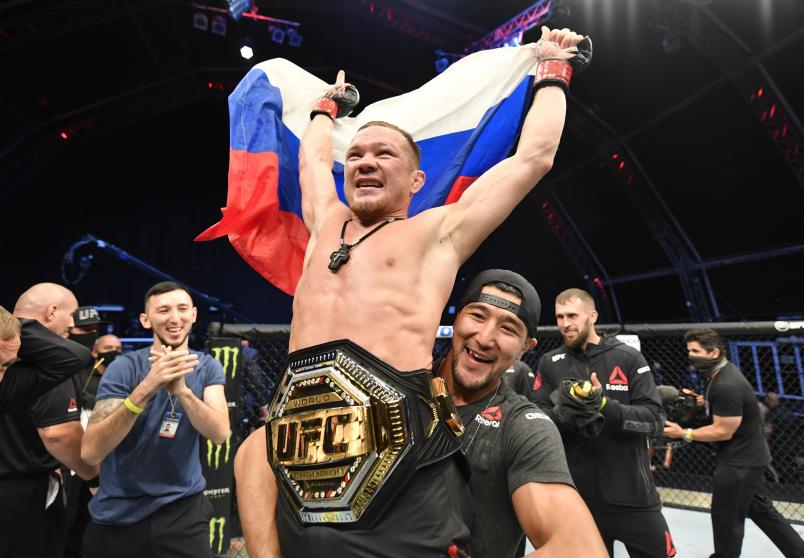 Petr Yan of Russia celebrates after his TKO victory over Jose Aldo in their UFC bantamweight championship fight during the UFC 251 event at Flash Forum on UFC Fight Island on July 12, 2020 on Yas Island, Abu Dhabi, United Arab Emirates. (Photo by Jeff Bot

“I believe it’s a highly anticipated fight for the fans and for me, too. I think it will feel good after I beat him,” Yan said in reference to the excitement surrounding UFC 259. “My mission is not only to win the belt, but to defend it multiple times.”

The UFC bantamweight division is full of intriguing fights for Yan. There are contenders like Cory Sandhagen and Rob Font, and former champions Cody Garbrandt and TJ Dillashaw waiting in the wings. But Yan’s focus remains on beating Sterling and then establishing himself as one of the greatest bantamweights in UFC history.

Yan wants his legacy to be one that is associated with absolute dominance, with his reign of terror truly starting at UFC 259.

“I want to beat the title defense record in my division.”