Petr Yan is attempting to enter a rare class of fighters when he takes on Jose Aldo at UFC 251 for the bantamweight title
By E. Spencer Kyte, on Twitter @SpencerKyte • Jul. 7, 2020

There have been 36 different fighters who won UFC championship gold before suffering their first defeat inside the Octagon, excluding those who were installed atop of their divisions, beginning with the inaugural heavyweight champion Mark “The Hammer” Coleman, who had earned five consecutive victories before submitting Dan Severn at UFC 12.

The most recent addition to that list came in December, when Alexander Volkanovski defeated Max Holloway to win the featherweight title at UFC 245, extending the former rugby man’s unbeaten run in the Octagon to seven.

While it was a fairly common occurrence in the formative days of the promotion, as experienced fighters challenged for gold early in their UFC tenures, it has happened less frequently in recent years as skill levels and the level of competition across all divisions has continued to rise. Few competitors are granted the opportunity to fight for UFC gold with only a handful of victories, and stringing together the four, five, or six consecutive wins needed to rise to the top of the list of contenders has become an increasingly difficult task.

That’s what makes the unbeaten march to the top of fighters like Conor McGregor, Khabib Nurmagomedov, Israel Adesanya, Kamaru Usman, and Volkanovski so impressive, as each navigated a dangerous path requiring between six and nine consecutive victories in order for them to stand as the undisputed rulers of their respective divisions.

Petr Yan is aiming to join that illustrious group this weekend as he takes to the Octagon to face Jose Aldo for the vacant bantamweight title in the first of three championship fights slated to close out the show at UFC 251.

“It’s been a crazy two years, everything was happening very fast,” said Yan, reflecting on his road to fighting for championship gold. “I managed to fight five times in the first year.

“It wasn’t easy, but since I signed to UFC, I always said that my goal is to win the belt.”

Yan’s arrival was highly anticipated, as the Russian had established himself as one of the top bantamweights competing outside the UFC and was wildly entertaining during his run of appearances with ACB, highlighted by his two-fight battle with Magomed Magomedov.

His debut against Teruto Ishihara in June 2018 showed that the advanced buzz was justified, as Yan confidently marched forward from the outset, taking the fight to the Japanese cult favorite before putting him away along the fence three-and-a-half minutes into the opening round.

His stock has continued to rise with each successive victory, as have his displays of moxie and charisma, though Yan himself thinks otherwise.

“I don’t think that I had any filter — I was speaking my mind and being myself all the time,” he countered when asked about showing more personality and swagger recently. “The difference is that more people have started paying attention, recently.

“People who followed my career from the beginning know that is the way I am and will always be.”

Given his performances, it’s been impossible for increasing numbers of people not to pay closer attention to the streaking 27-year-old, who carries a 14-1 record into his clash with Aldo in Abu Dhabi on Saturday.

He followed his debut victory over Ishihara with a wins over Jinsoo Son and Douglas Silva de Andrade, both quality opponents who simply could not match Yan’s output, intensity, and sharpness inside the cage.

More people started to take note when he walked down and cornered divisional stalwart John Dodson in February of last year, recognizing how difficult it can be to box in and box up the frenetic fighter from New Mexico. Others began buying into the hype when he did the same to Jimmie Rivera, a Top 10 staple who won his first five fights in the UFC and had only previously lost to elite competition.

However the fight that made it clear to the remaining holdouts that Yan was a legitimate title threat and deserving of the opportunity before him this weekend was his showdown with fan favorite Urijah Faber last December at UFC 245. “The California Kid” had come out of retirement four months earlier, ending a two-plus year hiatus with a first-round stoppage win over Ricky Simon at home in Sacramento, and hoped to expedite a run at the title by upending Yan in Las Vegas.

But Yan had other plans.

After using the first round to make his reads, the Russian made the boyish-looking Faber look like an overmatched 40-year-old man in the second, pressuring from the restart and smirking at Faber after exchanges before finally getting loose with his hands and busting him up to the point that the bout had to be halted for the ringside physician to assess the damage.

While Faber was allowed to continue and survived through the end of the round, Yan finished things just 43 seconds into the third round, earning the most high-profile triumph of his career and launching him into this championship opportunity on Saturday.

“It means a lot,” he said of fighting for the title. “It was my goal and now I’m one win away from reaching it.

“I’m excited and grateful about this opportunity and I will make the most of it, but I’m not satisfied with just fighting for the title,” he added. “I want to be the champion, and I want to win the title in the most impressive way possible.”

Standing in the way of Yan achieving that goal is Aldo, the long-time featherweight champion, who made his bantamweight debut immediately following Yan’s victory over Faber. While he landed on the wrong side of a split decision verdict against his countryman Marlon Moraes that evening, Aldo was still tabbed to face Henry Cejudo for the title earlier this year, only to be forced out of the matchup due to the COVID-19 pandemic that restricted travel from Brazil.

Dominick Cruz replaced Aldo in the matchup at UFC 249 and Cejudo retained his title by second-round stoppage victory, but then surprised everyone by announcing his retirement inside the cage during his post-fight interview with Joe Rogan. 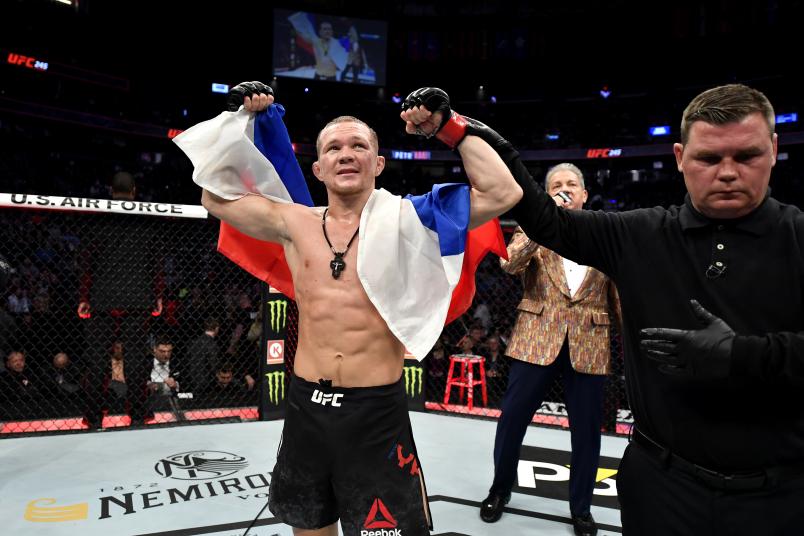 LAS VEGAS, NEVADA - DECEMBER 14: Petr Yan of Russia celebrates his win over Urijah Faber in their bantamweight bout during the UFC 245 event at T-Mobile Arena on December 14, 2019 in Las Vegas, Nevada. (Photo by Jeff Bottari/Zuffa LLC)

LAS VEGAS, NEVADA - DECEMBER 14: Petr Yan of Russia celebrates his win over Urijah Faber in their bantamweight bout during the UFC 245 event at T-Mobile Arena on December 14, 2019 in Las Vegas, Nevada. (Photo by Jeff Bottari/Zuffa LLC)

With the title vacated and Aldo penciled in on one side of the ledger, Yan was tabbed to face the Brazilian legend this weekend, and was ready to face whomever he needed to fight in order to make his championship dreams come true.

“I wasn’t disappointed or frustrated at all,” he said when asked about Cejudo’s abrupt departure. “I was ready to fight Moraes to prove with my actions that I deserve to fight for the title.

“It was never personal with Cejudo — he had the belt that I wanted to take from him, but now it’s vacant and Aldo is in my way. I respect him a lot, but right now he is in my way.

“It wasn’t my choice to fight him,” he added. “He came down to my division and put himself in this position and I won’t let anyone stop me from reaching my goal.”

Of the 36 fighters who won UFC gold before tasting defeat inside the Octagon for the first time, only eight have won as many or more fights than Yan before claiming their titles.

With a victory on Saturday night, Yan will put himself in impressive company, and although he’s pleased to have reached the point of fighting for championship gold, he won’t be satisfied until that UFC belt is wrapped around his waist and his name is added to the impressive roll call of champions above.