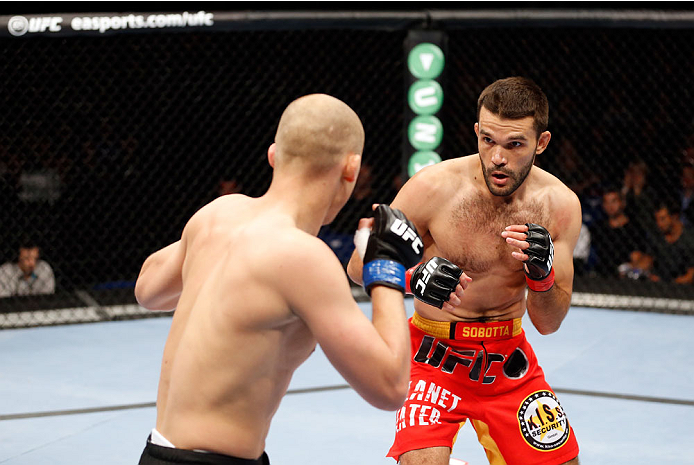 Before the work in the gym starts and the fists and feet start flying, it’s just Peter Sobotta and the forest at home in Balingen, Germany. It’s a time to run, yet beyond the physical, it’s an important few minutes alone to get the mental part of his game right.

“I just clear my mind,” he said. “It’s just me and the forest track. I enjoy the nature, the fresh air and I visualize how the fight is going to go. I imagine my hand getting raised.”

With a six-fight winning streak, a relative home game in Berlin on Saturday, and a UFC newcomer in Steven Kennedy as his opponent, there’s reason for optimism for the 28-year-old, whose last defeat came nearly five years ago against Amir Sadollah. Since then, Sobotta did some tweaking of his approach to all aspects of his game, and he hasn’t looked back.

“After my first run in the UFC that didn’t go the way I expected it to go, I was without a win in almost four years, so obviously I had a lot of soul searching to do,” he said. “I needed to readjust my attitude towards fighting and what I wanted to do inside the cage. So I worked with some great people in that area and did a lot of research on the mental aspect of competing myself. The plus in experience of course helps as well, but I’d go as far and say that I’m a completely different fighter now, because I approach the game differently.”

That goes for training as well, as he hopes to put the injuries that have plagued him in the past to the side once and for all.

“The debate of training hard versus training smart has been a hot topic in recent weeks, especially with the long injuries to key fighters and champions like Cain Velasquez or Khabib Nurmagomedov,” Sobotta said. “I’ve grown up with the Eastern European mentality of ‘the harder you train, the better you are prepared.’ This is how I had been training for the first years of my career. After ten years in the game, you just need to adjust. You have to take a break at the right time. Get in your massages and your rest. When I’m too tired after a brutal week of training, every once in a while I’ll drop the eleventh or twelfth session that week. Now this won’t rule out injuries altogether, as it is still a combat sport and you need to train hard to have that edge in the fight, but I definitely listen to my body more than in the past.”

The result? Sobotta says he’s a completely different fighter, and he’s looked like it, with five consecutive wins – all via first-round submission – leading to an invite back to the UFC, where he had gone 0-3 in 2009-10. The pressure was on for Sobotta against unbeaten Polish prospect Pawel Pawlak last May in Berlin, but he delivered, winning a three-round unanimous decision to notch his first Octagon victory.

“I had won a lot of fights outside of the UFC, but that first win inside the Octagon had eluded me up until that point,” Sobotta said. “It was almost like a demon I needed to conquer in order to unleash my full potential and come full circle as a martial artist. If I had not won that fight, I’d still have the feeling of being unaccomplished.”

With the demon of a winless UFC record vanquished, Sobotta can move on in his career and approach the next mountain to climb. That mountain was supposed to be Brazil’s Sergio Moraes, but when Moraes was injured recently and forced to withdraw from the bout, Australian veteran Kennedy stepped in.

“I would be lying if I said the change of opponent doesn’t change my approach,” Sobotta admits. “I’ve been preparing for an opponent, who, for the first time in my career, was at least on paper better than me on the ground, so I was training to escape a lot of bad positions. In Kennedy I’m now facing someone who is more of an all-round fighter like myself. This is actually great for my training, because it shakes up my routine and allows me to train some different things as well.”

The words “opponent change” and “great” usually don’t go together in prizefighting, especially on short notice, but that Sobotta can take such a positive stance on it shows how mature he is as a fighter. To be 28 at the same time this fighting maturity has arrived is a bonus.

“I’m now in the game for ten years and the sport has taken me all around the globe,” he said. “I have the structures to train and prepare professionally at my own gym Planet Eater and I am blessed to have a team around me that is much more than “just” teammates – these guys are family to me. I am very happy to have that kind of support and that will allow for a peak performance in Berlin.”

Nearly five years ago, Peter Sobotta was a youngster on the rise who got a rude welcome to the UFC. Now, it’s a whole different story, as this is a man with a plan, one that begins its implementation this Saturday in Berlin.

“I will come to Berlin very well prepared and in great shape,” he said. “Even though I had a longer break than expected, I didn’t let time just lapse away, but I worked on a lot of aspects in my game that I still wasn’t happy with. I am slowly but surely starting to become a complete martial artist who is comfortable in any type of fight – a grappling fight, a kickboxing bout or a wrestling match, it doesn’t matter. I have a lot of new weapons that I want to put on display and I want to turn in a performance that will have the fans going home excited. I am not thinking beyond June 20, but my dream is to test my skills against those of one of my childhood heroes in Demian Maia before he retires from the sport.”

First though, one more dip into the memory bank back to May 31, 2014, and the hope that he will repeat those feelings against Kennedy.

“It (his first UFC win) was a huge feeling of joy, relief and deep, deep satisfaction,” Sobotta said. “It was something that I had been working so hard for during all these years and then for it to finally happen was just overwhelming. I absolutely plan on repeating it on June 20. I want to build on last year’s positive experience, extend my win streak and start climbing those rankings.”