Simply put, it was one of the most spectacular performances you will see at the championship level in the Octagon. But the 27-year-old former Olympic Judo Bronze medalist believes the best is yet to come.

The fighters began trading as soon as the fight began, and Rousey quickly rocked Davis with a right hand and right knee. From there, she sent the Canadian for a ride with a perfectly executed throw to the mat. From there, she fired off with punches to the face that knocked Davis out and brought referee Yves Lavigne in to stop the fight at the 16-second mark.

With the win, Rousey improves to 10-0; Davis falls to 16-6. The 16-second knockout is tied with Frank Shamrock's win over Kevin Jackson for second fastest in a UFC championship fight. Andrei Arlovski's 15-second KO of Paul Buentello is the fastest.

No one ever questioned the talent of middleweight prospect Uriah Hall. But many wondered if he had the fire to take his career to the next level. Against Brazil’s Thiago Santos, he showed that fire, courageously battling through a broken toe to take a crowd-pleasing three-round unanimous decision win. 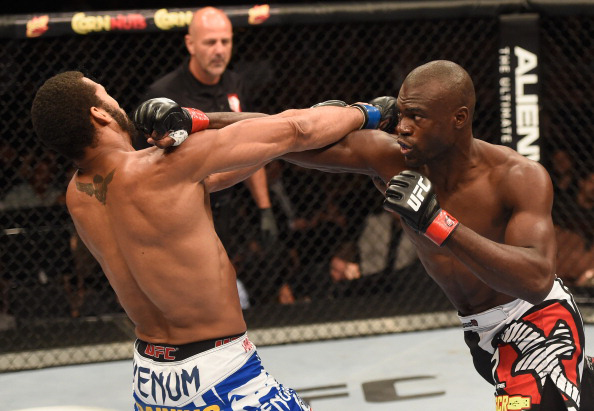 Hall (10-4) was the aggressor from the start, but it took him a little while to find his range. Once he did late in the round though, he began tagging Santos (9-3) with series of jarring blows. Santos was able to make it out of the frame, and between rounds it was revealed that Hall had suffered a broken toe.

Continuing to fight on, Hall had the crowd chanting for him as round two commenced, and while Santos stayed competitive, the New Yorker remained in control and moved effortlessly on his injured toe.

In the third, Hall continued to lead the dance, with Santos’ best chance of turning things around coming when he locked up with “Prime Time” and took him to the mat in the final minute. But it was too little too late for “Marreta,” as he came up on the short end of the decision.

Brimage had a rough go of it early on, as Doane took him down and had his back for the majority of the round as he looked for the rear naked choke. But Brimage did get back to his feet late, even though he wasn’t able to mount anything seriously on the offensive end.

Having more success in round two, Brimage’s strikes sent Doane sprawling to the canvas and “The Bama Beast” kept the Hawaiian from dominating the ground action, a key to Brimage taking the victory, but it wasn’t meant to be, as the third round turned into a war of nerves that Doane was able to take on the cards, earning him his second Octagon victory.

OFFICIAL UFC STATEMENT ON THE CANCELLATION OF STRUVE VS. MITRIONE

Stefan Struve suffered a non-life-threatening, near-fainting spell backstage. Afterwards, the medical team did not feel he was fit to compete. With his health and safety in mind, he’s been removed from the card. He has since been treated and released by medical staff. His vital signs are normal and he told doctors he is feeling better.

“I found out what happened and went to talk to Stefan. He was still in his chair and was very apologetic. He’s such a competitor. Obviously health and safety come first.”