Peralta Bringing Fire to his Return

"I’m motivated to get back in there and pick up where I left off. I’ve
been training very hard and getting ready. I can’t wait to get back in
the cage." - Robbie Peralta 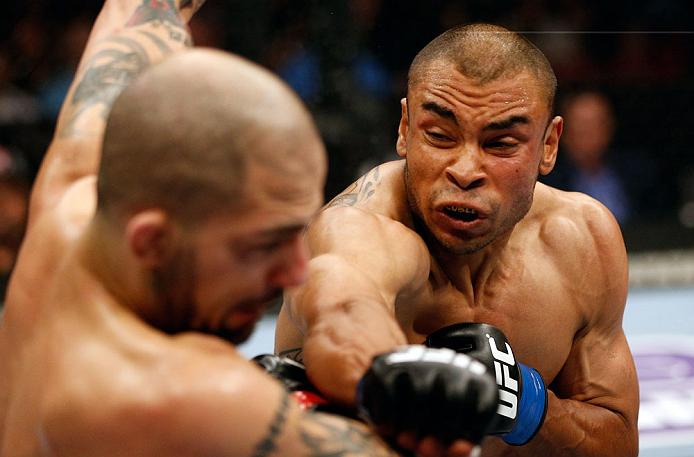 An athlete who makes his or her living in combat sports knows a thing or two about adversity. The very nature of fighting for a living is facing the challenges and obstacles which come when the cage door closes, and success is determined by a fighter’s ability to handle those twists and turns at a high percentage rate.

While Robbie Peralta has hit those strides at different times of his career, his most current stretch has come with a fair share of low spots. The 27-year-old Californian rode a seven-fight winning streak across multiple stages to earn a place on the UFC roster, and while he made the most of his promotional debut by defeating Mike Lullo at UFC Fight Night in 2011, the aftermath has produced mixed results.

A stoppage victory over Mackens Semerzier was overturned to a “no contest” as the result of an accidental headbutt, but a knockout victory over Jason Young in his next showing had everything looking up for the Escondido native. Peralta was on the verge of picking up solid traction in an increasingly competitive featherweight division and headed into his bout with Akira Corassani looking to put a definitive stamp on his place in the weight class.

Unfortunately for Peralta, his nickname “Problems” took on a literal meaning for his next step as he was defeated by the TUF alum via unanimous decision at UFC on FUEL TV 9 in April. Where the loss certainly stunted his momentum, a failed post-fight drug test and suspension added insult to injury. Peralta was forced to sit on the sidelines for six months as the action continued up and down the ranks in the 145-pound fold and he was forced to make a decision.

The Team Xplode fighter could either wallow in the negative or turn up the intensity to make sure his return to the cage was the type that sent a message. He set about the process of taking his skills to the next level and he fully expects those results to show when he squares off with Estevan Payan at UFC 168 this Saturday in Las Vegas.

“It was real important to stay positive,” Peralta said. “I had a lot of things going on in my life and in my mind for that last fight. I would never make any excuses - Akira is a good fighter and he won that fight - but my mind wasn’t 100 percent focused on the fight. But now my mind is where it needs to be. My mind is clear and I’m ready to go. I’m motivated to get back in there and pick up where I left off. I’ve been training very hard and getting ready. I can’t wait to get back in the cage.

“I’m all about making exciting fights for the fans. I want people to enjoy watching me fight and look forward to the next time I’m getting in there. This sport is all about entertaining the people. It’s what we do and what I’m all about. I want to go in there and make an exciting fight and give them something to talk about.”

The featherweight clash will kick off what is being billed as the “biggest fight card of the year” due in large part to a pair of high-profile rematches at the top of the card. WMMA phenom Ronda Rousey will defend her belt against rival Miesha Tate, and the fighter heralded by many as the greatest mixed martial artist of all-time, Anderson Silva, will attempt to reclaim his long-held belt from current champion Chris Weidman. With bouts of that caliber bringing the eyes of the MMA world to the event, Peralta understands it’s a tremendous opportunity to put on a show.

“I think this is a good matchup for me. We are both coming off a loss and we are both hungry. We are both looking to get back on the winning side. I’m hoping to go in there and give it my all. I want to put on an exciting fight and get my hand raised at the end. I’m bringing an action-packed fight in this one. Fans shouldn’t turn away at all because it’s going to be non-stop excitement. We are both going to bring it and there are going to be fireworks. I know I’m ready to go all out and do whatever I have to do to win. I’m going to leave everything out there in that cage.

“It’s a blessing, man,” he added about his inclusion on such a high-profile card. “I’m excited and really stoked about being on this card. This is a huge event, the last card of the year, and there are a ton of great fighters on the card. I’m just happy to be on the same card with these guys. It’s an honor.”

Over the past two years, the featherweight division has risen to become one of the most talent-stacked collectives on the UFC roster. In addition to solid depth in the rankings, the upper tier of the weight class has been engaged in an ultra-competitive race for title opportunities. Featherweight king and Brazilian wrecking machine Jose Aldo still reigns atop the division, but Peralta hopes that one day his hard work will put him amongst the top fighters at 145 pounds.

“I think this division is stacked,” Peralta said. “There are a ton of talented guys here and we all have something to prove. We have to go out there and make a name for ourselves. We have to prove we belong in this division because there are a lot of fighters ready to step up and take our spots if we don’t perform. That’s why you have to stay hungry and put on exciting fights.

“I want to get my name out there and show I’m a force to be reckoned with. I’m not just here to be a stepping stone. I’m here to fight and win. I want to be in one of those top spots and hopefully one day I’ll be number one. I just have to work and train hard for it and fight my heart out.”