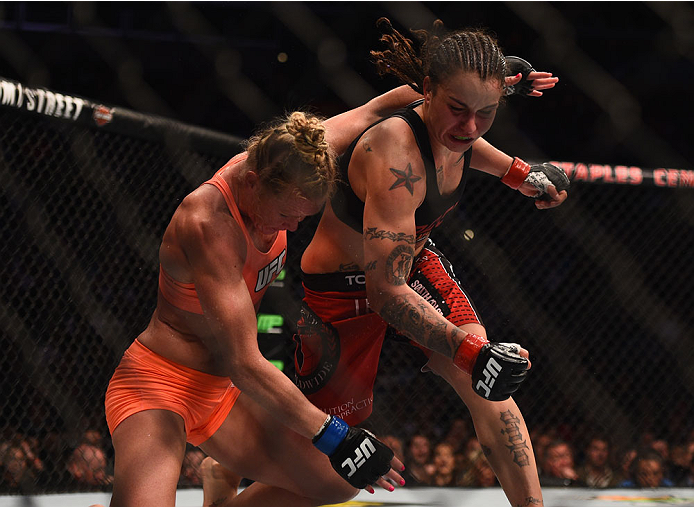 No two records are created equal.

Some fighters can build up shiny resumes with quick finishes and lengthy unbeaten streaks while never stepping into the cage to face any real competition, while others will hover around the .500 mark, alternating wins and losses, never amassing too many of one without an appearance from the other, facing a cast of the toughest competitors a division has to offer.

Raquel Pennington is the perfect embodiment of the latter.

Even before she drew rave reviews from UFC President Dana White for her scrappy, never-back-down performances on Season 18 of The Ultimate Fighter, the Colorado Springs native had built a name for herself as a tough out willing to take on all comers. Through her first six fights, Pennington amassed a 3-3 record with wins over fellow TUF alum Sarah Moras and Hawaiian Raquel Pa’aluhi offset by losses to future UFC title contender Cat Zingano and durable veteran Leslie Smith.

Since arriving in the Octagon, it has been more of the same for the 26-year-old, who has followed wins over Roxanne Modafferi and Ashlee Evans-Smith with split decision losses to Jessica Andrade and Holly Holm heading into her appearance at UFC 191 this weekend in Las Vegas.

“There are girls out there that can have the same record and you can say, ‘Who have they fought?’” Pennington questions. “With me, I’ve fought all the tough chicks. I like that idea – that I’ve challenged myself – but there are some fights that I shouldn’t have taken at the time. Whether I was sick or whatever it was, there was always something there, but at the end of the day, I always battled through.”

Heading into Saturday’s fight card at the MGM Grand Garden Arena, Pennington has battled through a litany of opponent changes, but never once thought about backing out. Six months removed from a close loss to Holm, who will face Ronda Rousey for the UFC women’s bantamweight title at UFC 193 in Melbourne, Australia in two months, she’s ready to get back into the Octagon and get back to doing what she loves.

Initially expected to face Smith in a rematch of their January 2013 battle under the Invicta FC banner, the Team Cesar Gracie fighter wasn’t going to be able to make the September 5 fight card after suffering an injury earlier in the year, so the bout was scrapped in favor of a pairing with former title challenger Liz Carmouche.

But that fight only stayed on the books for a couple of days, as Carmouche was forced to withdraw from the fight and Pennington was once again booked into a rematch, this time against the diminutive Andrade, who picked up her fourth win in five outings last month in San Diego.

“I do have to admit, it got a little frustrating bouncing around between all the opponents on short notice,” Pennington laughs. “But at the end of the day with Jessica, it kind of works out because it’s a rematch that I wanted and it’s exciting.”

Their first meeting at UFC 171 was one critics and hardcore observers looked forward to on the March 2014 Pay-Per-View card in Dallas. Pennington was fresh off her win over Modafferi at the TUF 18 Finale three months earlier and Andrade had rebounded from a debut loss to Carmouche with a blistering performance against Rosi Sexton on the veteran’s home turf in Manchester, England.

The division was still in the developmental stages and the winner had the chance to climb the rankings and continue making noise in the newly introduced weight class, and their performances showed an understanding of the stakes, as both Pennington and Andrade left it all in the cage come fight night.

One round from one judge tilted the verdict in Andrade’s favor, which has since become a recurring theme in Pennington’s UFC defeats. Though she’s just 2-2 in the Octagon thus far, she’s one round from one judge in each of her two losses away from a 4-0 mark and a different place in the pecking order, and that reality has given Pennington a plan of attack for her next few fights.

Beginning with this weekend’s rematch with Andrade, “Rocky” wants to embark on what she has labeled her “Revenge Tour” – a series of second chances against the four women on the UFC roster that have bested her thus far.

“Right now, my plan is just to turn my career around and show the fighter that I really, truly am,” the passionate prizefighter continues. “I’ve never been that fighter to let it go to the judges, and for some reason I lost that killer instinct, so it’s just something that I have to find again, which is why I want to go on this Revenge Tour – to show that I am the better fighter and that I am a quicker fighter than I have ever been.”

Andrade is up first this weekend in Las Vegas. After that, Pennington has no preference; she wants to face them all at one time or another.

“Whatever order; it doesn’t matter to me. This is the Revenge Tour.”