Read on for results of the fights on the TUF 18 Finale main card, held Saturday, November 30 at Mandalay Bay Events Center in Las Vegas, NV.

After a night of uneven pacing and several lopsided fights, lightweight Nate Diaz saved The Ultimate Fighter Finale with an on-point main event performance, dramatically knocking out Gray Maynard in the first round. 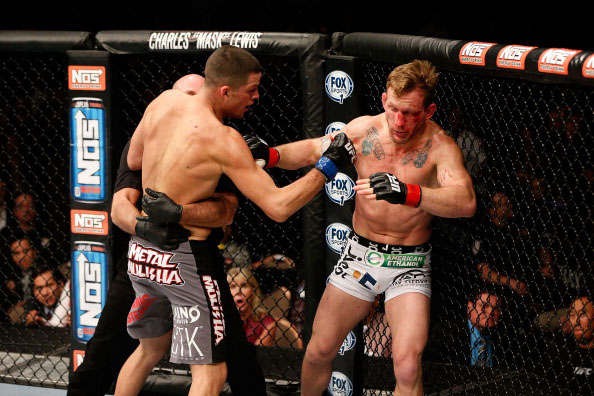 Gray Maynard vs. Nate Diaz
Maynard took the center of the Octagon, with southpaw Diaz crouching long on the outside. Power wrestler Maynard did as expected, getting things to the ground with two takedowns in rapid succession. But Diaz managed to use the cage to get back up, and once they were on the feet, it was Diaz’ show. A left hand from Diaz dropped Maynard briefly, and Diaz swarmed, throwing rights and knees to Maynard against the fence. Maynard stayed upright but was slow to respond, pushing Diaz away, evading in slow motion and not covering up, blood trickling down the left side of his face. Diaz pursued with his ruthless boxing, and two more big lefts against the fence finally buckled Maynard’s knees to the point that Yves Lavigne waved it off at 2:38.

After Diaz was pulled away by the referee, Maynard staggered forward several feet and fell to his knees; doctors attended to him and he left the Octagon before the decision was read. Diaz, meanwhile, gave a classic post-fight interview with Jon Anik, ignoring the questions and instead praising training partner Gilbert Melendez and the rest of the team, ending it with “I got sh$* to do – I’m hungry.” The trilogy between TUF 5’s Maynard and Diaz now stands at 2-1 in favor of Diaz, who’s won one submission and one knockout to Maynard’s split decision victory.

Diaz’ win in his 19th Octagon appearance improves his record to 18-9. Maynard falls to 12-4-1 (1NC), having been knocked out in three of his last four. 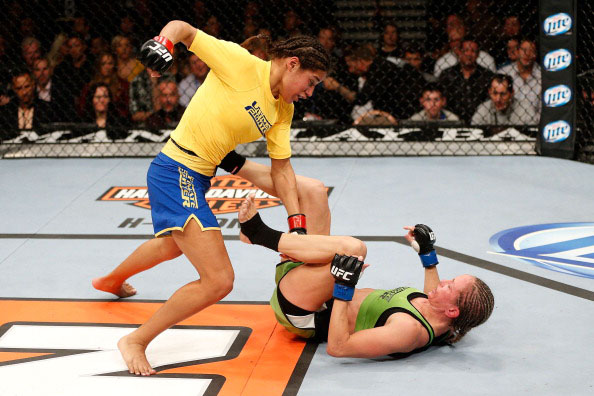 pounded to a round-one finish.

Rakoczy took a low stance early, but Penna bulled her against the cage and easily tripped her to the ground. Rakoczy upkicked her way back to her feet, but Pena pushed her right back against the links. Back on the feet, Pena grabbed Rakoczy around the waist and threw her back to the mat in the middle of the canvas. This time, Pena stayed heavy on top and used her wild striking from there, posturing up. Rakoczy bucked, punched from the bottom and tried to throw up her legs, but she couldn’t escape the focused Pena, who moved to mount and flattened her out. Dozens of unanswered haymakers and elbows later, Rakoczy shrimped away and covered her face, eventually drawing the stoppage with only one second left in the first.

"The Venezuelan Vixen" becomes the Ultimate Fighter and improves her record to 6-2 in the process, having now finished all of her pro wins. “I figured she would try to box me but I didn’t give her any space," said Pena. "I never thought there would be women in the UFC so to be the first female Ultimate Fighter winner is amazing." Rakoczy slides to 2-4 (1NC).

Chris Holdsworth vs. Davey Grant
In the co-co-main event of the evening, Chris Holdworth won the title of season 18 men’s bantamweight Ultimate Fighter via second-round submission of Englishman Davey Grant. Team Tate’s Holdworth weathered Grant’s boxing and takedown defense before getting the best of the Team Rousey fighter. 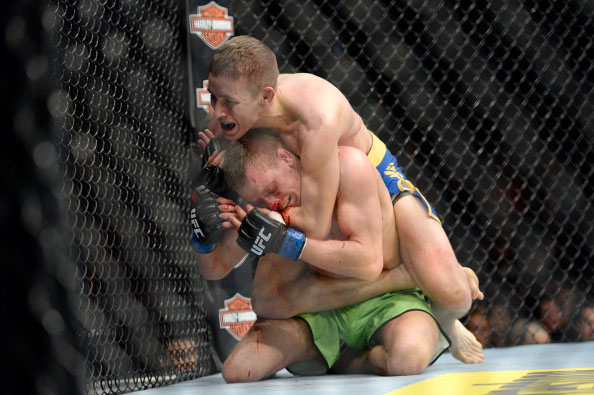 There was no feeling-out period with both men charging with fast fists. Grant landed a big hand off the break from a takedown attempt, but a right from Holdworth sent him backward. In between struggles for control on the fence, Grant pursued, but each time was rewarded with a takedown attempt. The two traded knees in and out of the clinch. With roughly a minute left, Grant tried to get his own takedown, and managed to pull Holdsworth on top of him. The bottom game specialist tried for a triangle, but Holdsworth punched free as the bell rang.

In round two, Grant caught a high kick and used it to drop Holdsworth, but from there let him back up. His boxing was on point, as he mixed up strikes to Holdsworth’s body and head, but Holdworth’s counters made their presence known on Grant’s bloodied face. During another takedown attempt by Holdsworth, Grant tripped himself backward, giving up position. Instead of the momentum carrying him over, he wound up in Holdworth’s side control. From there, the Team Alpha Male product passed into mount and nimbly took Grant’s back, locking in the rear-naked and getting the tap at 2:10.

Holdworth, an early favorite to win the show, improves to 6-0 with the win. "Davey’s a family man and a role model but tonight was my night," said Holdsworth. "I'm ecstatic to be the winner and honored to have fought someone as tough as Davey. I knew he’d come forward with wide left hooks, but I kept my distance. Like Burt Watson told us yesterday, its harder to stay here than get here so my work is just beginning." Grant now stands at 8-2.

Jessamyn Duke vs. Peggy Morgan
Undefeated Jessamyn Duke showed her potential in a three-round war with fellow Team Rousey standout Peggy Duke, battering her for most of three rounds to win 30-27.

Both fighters started with clean boxing, but once things got into close quarters, Duke shined. She 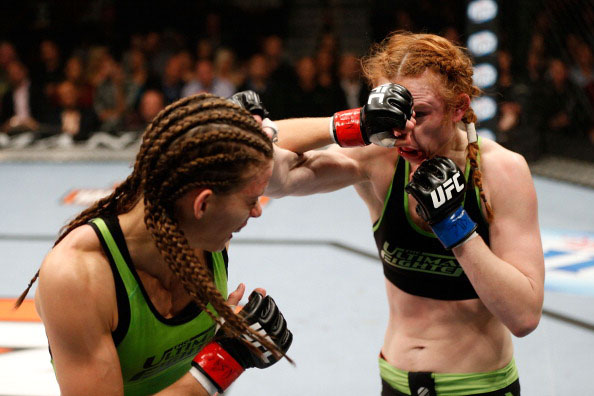 held on to the Thai clinch and landed knee after knee, forcing Morgan to try for a takedown. From the struggle against the Octagon wall, Duke managed to reverse positions; though Morgan got the trip, Duke positioned in a deep guillotine and got guard. Morgan escaped, but Duke locked her legs and worked  for a triangle, elbowing Morgan’s head the entire time – but one of Morgan’s arms stayed trapped inside the figure-four lock, allowing her to survive.

Round two was all standup, with the 5’11” Duke getting the better of her 6’1” foe. Morgan backed up Duke, but “The Gun” was consistently more accurate. Duke led with left hooks early in the round, clearing the path to follow later on with straight rights that Morgan wasn’t used to. Knees from the clinch, elbows, and nonstop body shots all scored repeatedly for Duke, who ended the round by getting the bodylock and throwing Morgan to the mat.

Morgan was game, but Duke made her pay with front kicks followed by uppercuts from the clinch. Duke teed off on Morgan, pushing her against the fence. But Morgan waited out the flurry and managed to drag things to the mat, landing in top position and trying for a game-changer rear-naked. Duke eventually managed to get off her back and tied up Morgan, hoping for a standup. She got one with half a minute left, and the two engaged in a wild standup flurry, which got the crowd – which was booing the ground exchange a minute earlier – screaming.

Duke, who now trains in California with her Ultimate Fighter coach Ronda Rousey, rises to 3-0 (1NC) with the win. Morgan, a 33-year-old literature professor, departs 2-1.

Modafferi moved forward and stayed active, but her power and accuracy seemed to rate zeros as she chased Rocky with combinations that failed to land. Pennington seemed hestitant to pull the trigger, though that changed after Modafferi bulled her to the cage. Pennington finally reversed, freed herself and came out with more fire. In addition to the kicks she wielded, Pennington landed at least three solid right straights to her opponent, the last of which visibly wobbled Modafferi just before the bell. 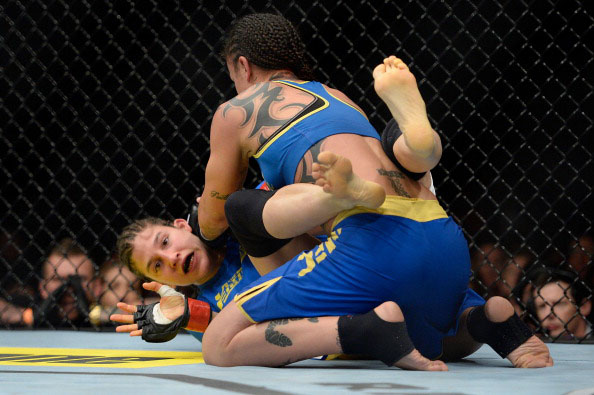 Pennington was more aggressive in the second, though Modafferi went for a takedown against the cage and briefly got it. But Pennington popped up, then backed Modafferi against the cage with punches. Modaferri shot, but Pennington sprawled and the two wound up on the ground.
The crowd roared “Rox-y” as Modaferri worked for triangles and armbars, but each time Pennington elbowed and punched her way to safety before allowing the smaller fighter to stand. She lobbed hard punches for the remaining minute, tagging “The Happy Warrior” with fists and elbows.

Modafferi’s primary weapon by the third was her energy, as she forced Pennington to chase her across the Octagon. Pennington obliged, tagging Modafferi repeatedly before being dragged to the ground again from the clinch. Modaferri again went for submissions from the bottom, but when she finally stood, it was Pennington who latched in a deep guillotine, which she worked for all the way until the bell.