Ultimate Fighter 18 winner Julianna Pena threw her hat in the ring for a shot at the women’s bantamweight crown Saturday at T-Mobile Arena, remaining unbeaten in the UFC with a three-round unanimous decision over former world title challenger Cat Zingano in a UFC 200 prelim bout.

Scores were 29-28 across the board for Spokane’s Pena, now 9-2; Zingano falls to 9-2 in her first bout since a title fight loss to then-champion Ronda Rousey February of 2015.

Locking up early, the two battled against the fence and on the mat. Zingano held an early edge, and while Pena got up and then controlled matters on the canvas, it was Zingano reversing position and getting back on top. With less than 30 seconds remaining, Pena got back to her feet and fired off some strikes, getting Zingano’s attention before the horn sounded.

Zingano got a roar from the crowd for a slick takedown to begin round two, and as soon as Pena got up, Zingano threw her again. Yet as Zingano looked to lock her opponent up, Pena was able to find daylight and get to the Coloradan’s back, where she nearly locked up a choke. Zingano’s defense kept her in the fight though, leading the fight to a third and final round.

As the two fighters locked up to begin the final frame, it was Pena getting the takedown and working for a finish. Staying busy in that pursuit, Pena fired off strikes while constantly attempting to improve her position and catch Zingano napping. With 90 seconds left, Pena almost got the rear naked choke again, but “Alpha Cat” broke loose again. What she couldn’t do was get back to her feet, reversing position only with a handful of ticks left on the clock. 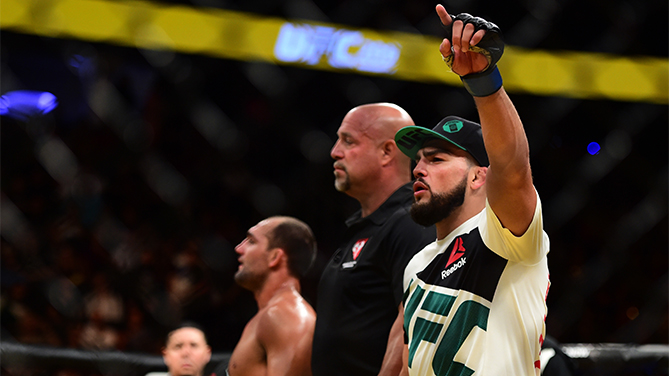 Former UFC welterweight champion Johny Hendricks continued the slide he’s been on since losing his title in 2014, moving to 1-2 in his last three with a unanimous decision defeat at the hands of Kelvin Gastelum.

Gastelum’s movement and striking were impressive in the opening round, and after peppering Hendricks with punches and kicks, the Arizonan began sitting down on his punches in the final two minutes, ripping off a series of hard 1-2s from the southpaw stance that rattled his foe.

Hendricks showed signs of life in round two, getting Gastelum to the mat in the second minute. The former Ultimate Fighter winner didn’t stay long though, and once standing, he got back to business with his striking, but the exchanges between the two were getting closer as the round progressed.

Despite a rough weight cut, Hendricks found some reserves in his gas tank in round three, as he scored a takedown and kept throwing, even though he was missing more than landing. For Gastelum’s part, he stuck to his striking attack, with the two getting the crowd cheering with a heated exchange in the closing moments of the fight.

Former UFC bantamweight champion TJ Dillashaw avenged a loss to Raphael Assuncao, and this time, there was no question about the decision, as the current No. 1-ranked 135-pounder delivered a shutout three-round decision victory.

Scores were 30-27 across the board for Dillashaw, who lost via split decision to Assuncao in October of 2013. The No. 3-ranked Assuncao, on the sidelines due to injury since October of 2014, saw his seven-fight win streak snapped with the defeat.

If there was a way to dominate a round without looking like he dominated it, Dillashaw pulled it off in the first frame, as he pecked and poked at Assuncao while blocking practically all the incoming fire sent in his direction.

Early in the second, Dillashaw (14-3) bloodied Assuncao’s nose and was still showing little regard for his opponent’s offense, as he kept his hands down at his side throughout. The Brazilian wasn’t letting up on his attack, and his increased aggressiveness may have been making a positive impact on the judges, even though Dillashaw’s defense remained solid. With a little less than 90 seconds left, Assuncao (23-5) scored a quick takedown, but when the two rose, referee Mark Smith halted the action to have the Octagonside physician check out the Recife native, and a right hand-induced flash knockdown by Dillashaw didn’t help matters either.

The third round followed the pattern of the previous two, with Assuncao stalking Dillashaw but unable to land a telling blow, while Dillashaw stuck and move and threw in a takedown for good measure before the final horn.

Lightweight up and comer Sage Northcutt got a tougher than expected scrap from former Ultimate Fighter competitor Enrique Marin, but the 20-year-old still found a way to win and bounce back from the first loss of his pro career, as he won a three-round unanimous decision.

Relaxed and confident, Northcutt bounced in and out, landing whatever he wanted to on Marin, and even smiling when the Spain native tagged him hard with a counter right to the face. Two minutes in, Marin was able to score a takedown, and he attempted a submission, but Northcutt adjusted, reversed position, and took over from the top. With under 90 seconds remaining, the two rose briefly before going back to the mat to finish out the round.

After some standup action to start round two, the fighters went to the mat again and Marin nearly finished Northcutt with a tight armbar before the Texan found a way out of the maneuver. Marin kept working for the submission though, almost catching an arm again in the final minute before Northcutt got free and ended the frame with some ground strikes.

With the winner of the third round likely the winner of the fight, it was surprising to see the action stall in the early going. But as Marin sought a takedown, Northcutt unloaded with strikes, bloodying his foe. Eventually, Marin got his takedown, but Northcutt rolled out of danger and into the top position, where he landed more strikes on his foe up until bout’s end.