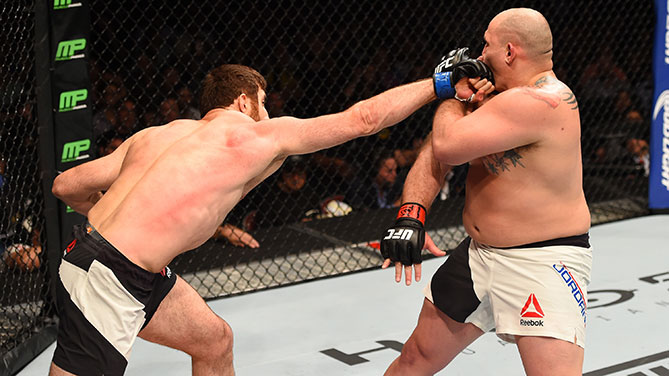 Jordan used his strikes to close the distance on the taller Magomedov and after some grueling clinchwork he put the Dagestan native on the canvas. Magomedov patiently got back to his feet, using a kimura attempt to help him there. Once upright, Magomedov scored with kicks and some punches, with the shots slowing but not stopping Jordan’s forward march.

Continuing to press the action in round two, Jordan briefly jarred Magomedov with his strikes and tried to get the bout to the mat, but the “Leopard” stayed upright and got in more than his share of flush blows that got Jordan’s attention and drew blood. And as the round came to a close, it was Magomedov in control of the bout.

A trade of strikes to open the final round favored Jordan, who landed with a right hand and went right into a clinch. But Magomedov rebounded immediately, landing at close range and opening another cut on the former LSU football player. From there, Magomedov began pulling away. And even with Jordan buying some time in the clinch, when the two separated, the technical attack of the Dagestani heavyweight was too much for the “Savage.” 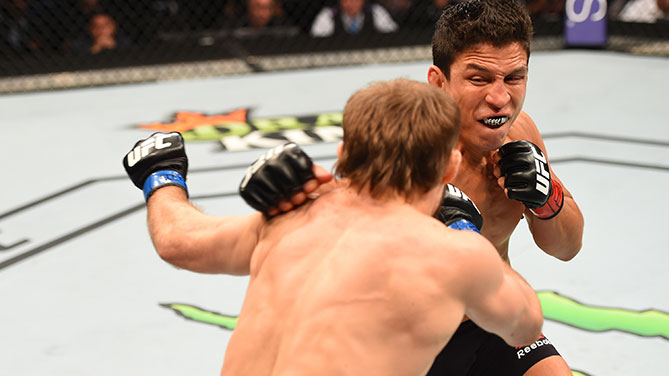 No. 1 flyweight contender Joseph Benavidez maintained his position in the division but didn’t have an easy time doing it, gutting out a hard-fought three round unanimous decision over Ali Bagautinov in a clash of former world title challengers.

Benavidez was the slightly busier of the two fighters in the opening round and it could be said that he landed the hardest shot of the frame - a thudding overhand right that raised a swelling under Bagautinov’s left eye. But a right uppercut by Bagautinov opened a nasty cut over Benavidez’ left eye, giving the Sacramento product some issues throughout the rest of the frame.

Neither fighter could pull away in the second, with the competitive action still favoring Benavidez, but not by a lot, especially with Bagautinov scoring a takedown late.

The third round was a carbon copy of the second, right down to Bagautinov’s late takedown and Benavidez’ busier work rate before then. And while the crowd got restless at the end, the bout was a solid chess match between two 125-pound stalwarts. 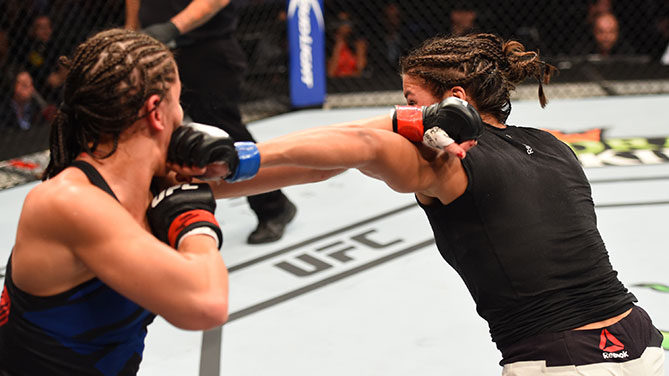 Two fights removed from winning The Ultimate Fighter 18, Julianna Pena made a statement to the rest of the bantamweight division, scoring her biggest win to date by taking a three-round unanimous decision over No. 6-ranked contender Jessica Eye.

The bantamweights began exchanging immediately, with Eye holding the edge until Pena locked up and pulled guard. Eye chose to get back to her feet but the two remained tied up against the fence. Midway through the round Pena was able to put Eye on her back, but only briefly, and the clinch work continued with Eye in control. Pena did get another takedown with a little over a minute to go and the Spokane native went to work, landing with some elbows before the round ended.

Pena landed a hard elbow at close range to start round two but a missed kick allowed Eye to get the takedown. The Ohioan was impressive from the top position, eventually locking in an arm triangle. Pena escaped, but Eye continued to work well on the ground. The solid effort didn’t go without a cost though, as Eye was penalized a point by referee Frank Collazo for a knee to Pena’s head while the two were grounded. Surprisingly, the two were restarted on the feet and not the mat, but the rest of the round went by without incident.

Pena got a takedown to start the final round and she nearly sunk in a choke, but Eye was able to get loose. Eye wasn’t able to get off her back though, with Pena almost getting a second choke, and the strong third round by “The Venezuelan Vixen” locked up the frame and the fight.