Pedro Munhoz’s main event clash with Frankie Edgar was exactly the type of fight that “The Young Punisher” has become known for.

He was in Edgar’s grill for five rounds, giving it everything he could. The bout would go to Edgar by a razor close split decision, and even though the effort wasn’t enough to get his hand raised, the Brazilian bantamweight contender won’t let the result deter him from the task at hand.

“Against Frankie I was proud of my performance. I was in his face for 25 minutes and that’s just who I am; I bring the fight,” Munhoz told UFC.com. “I’m not focused on where a fight can try to get me, I learned that with the Frankie fight. I cannot be attached to the outcome of a fight; I just have to get in there and have fun and be me.”

With Munhoz switching his mission from the outcome of the fight to enjoying the fight, he believes he has reached a new level. He felt it during his training at American Top Team and he cannot wait to feel it when he fights Jimmie Rivera at UFC Fight Night: Rozenstruik vs Gane. 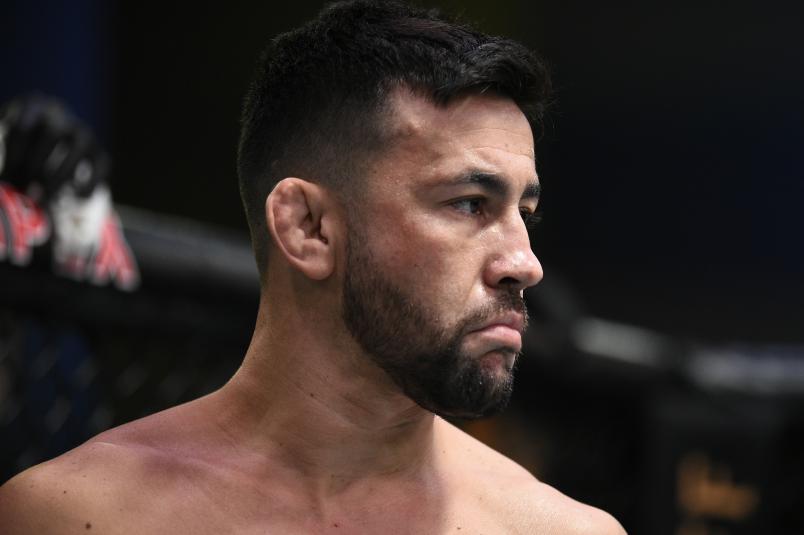 Pedro Munhoz of Brazil prepares to fight Frankie Edgar in their bantamweight fight during the UFC Fight Night event at UFC APEX on August 22, 2020 in Las Vegas, Nevada. (Photo by Chris Unger/Zuffa LLC)

The bout between Munhoz and Rivera is a rematch from 2015, which Rivera won by split decision. It was a thrilling contest, and it is the type of fight that Munhoz expects in the UFC APEX on Saturday, February 27.

“We weren’t even in the rankings back then and now we have so many fights and I’m very happy for Jimmie and what he has been displaying. We are two of the best fighters in this division and it’s very special to be able to display our skills in this rematch,” Munhoz said of his second shot at besting Rivera. “The crowd was so excited during our first fight and when I got the call to face Jimmie next, I got excited because we get a chance to do better than we did almost six years ago.”

Since their first fight, both Munhoz and Rivera have become mainstays at the top of the stacked bantamweight division. They’ve both fought killers, they’ve both had ups and downs, but, most importantly, they have stayed at the top.

Munhoz has finished foes like Rob Font and former champion Cody Garbrandt, while Rivera had defeated Urijah Faber and Cody Stamann. The experience gained by both fighters has Munhoz approaching Saturday’s contest like the first fight didn’t even happen. 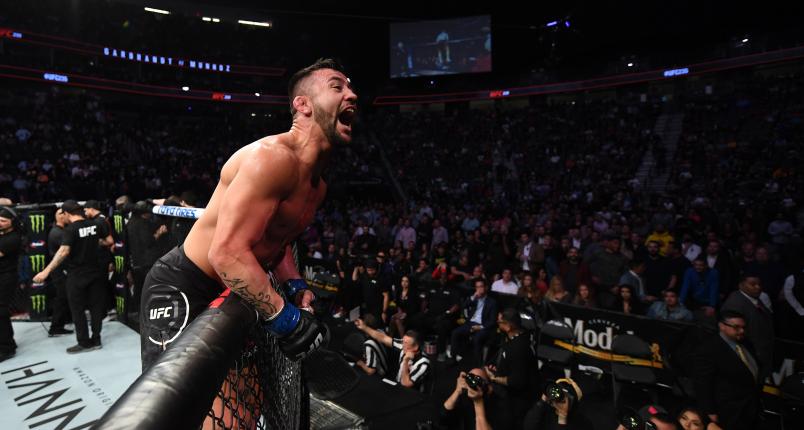 Pedro Munhoz of Brazil celebrates his victory over Cody Garbrandt in their bantamweight bout during the UFC 235 event at T-Mobile Arena on March 2, 2019 in Las Vegas, Nevada. (Photo by Jeff Bottari/Zuffa LLC

“The way I look at it, this fight is barely a rematch. We are totally different, but we have been growing side-by-side for years,” Munhoz said. “We have both added to our game and we both have fun styles. I just can’t wait to compete with him again.”

Their fight comes just a week before the bantamweight belt is up for grabs, as Petr Yan defends his title against Aljamain Sterling. It’s a fight that you can guarantee Munhoz will have a close eye on, and he hopes that his fight with Rivera can kick up the momentum for the division even higher.

“The bantamweight division is on fire,” Munhoz said. “I’m truly excited for this time in the bantamweight division. We have Jimmie and me fighting again, you have Aljamain Sterling, who I’ve fought, and then Petr Yan, who Jimmie has fought. We know we can compete with those guys and we are going to prove that on Saturday night.”

“I’m ready to put on a show and get my name back on the list of true title contenders.”

Make sure you watch the rematch between Munhoz and Rivera on UFC Fight Night: Rozenstruik vs Gane this Saturday on ESPN+. The prelims start at 5pm ET / 2pm PT with the main card starting at 8pm ET / 5pm PT.