Welcoming a legend to the bantamweight division, Pedro Munhoz thinks it's a matter of time before he gets his title shot.
By E. Spencer Kyte, on Twitter @spencerkyte • Aug. 19, 2020

Pedro Munhoz’s personal philosophy is a twist on the old adage that everything happens for a reason.

“I believe that everything that happens in life is happening for us, not against us,” explained the bantamweight standout, whose last six weeks have given him every reason to continue espousing his philosophy and maintaining his always sunny disposition.

Originally scheduled to face Frankie Edgar in a three-round fight as the co-main event on the July 15 card headlined by featherweights Calvin Kattar and Dan Ige, the 33-year-old Brazilian was scratched from the contest nine days prior after testing positive for COVID-19 before departing for Abu Dhabi.

After the initial disappointment of not being able to compete passed and Munhoz got the all clear to return to training, he was informed that his fight with Edgar had been rescheduled for August 15 at UFC 252.

A few days later, he found out they had been shifted into the main event slot a week later.

“I was already excited that the fight got rebooked for August 15 and we were fighting again, and then I got even more excited when the fight got moved to the main event,” said Munhoz, who wasn’t sure if the pairing would remain intact following their initial cancellation. “For me it’s a big honor to be able to share the Octagon with a legend like Frankie Edgar, who is the second former champ that I will be facing.”

In some ways, this fight with Edgar has to feel like déjà vu all over again for Munhoz, to quote the great Yogi Berra, as it was just 15 months ago that he was paired off with a former UFC titleholder for the first time, looking at the matchup as an opportunity to graduate from being viewed as one of the unheralded stalwarts in the 135-pound weight class to a legitimate title contender.

Heading into his fight with Cody Garbrandt at UFC 235, Munhoz was confident that he could hold his own in a striking battle with “No Love,” forecasting that he would be able to draw the fiery former titleholder into a series of chaotic exchanges, where he would find Garbrandt’s chin and hand him a third straight knockout loss.

Everything went exactly as Munhoz had envisioned on fight night, as he pressed the action, trading heavy leather with the Team Alpha Male standout, and ultimately spun him to the ground with a sharp right hand late in the opening stanza. The duo earned Fight of the Night honors and the victory put Munhoz on a three-fight winning streak.

Three months later, Munhoz landed on the wrong side of a unanimous decision verdict against Aljamain Sterling at UFC 238, leaving him right back where he was prior to his first bout against a former UFC champion: stationed at No. 5 in the bantamweight rankings.

Not surprisingly, the ever-positive Munhoz is proud of what he’s accomplished and focused on making the most of the opportunity in front of him this weekend in Las Vegas.

“I’m very proud to be a UFC fighter and even more to be in the position I’m in today as a Top 5 fighter and being one of the 10 best bantamweights for four or five years,” said Munhoz, who carries an 18-4 record with one no contest into his first UFC main event on Saturday night. “This is not a career that was handed to me; I was thrown into the lions den.

“My first fight in the UFC was against a guy that was No. 3 in the UFC, Raphael Assuncao, on one week’s notice,” continued the American Top Team representative, who holds victories over Rob Font, Brett Johns and Bryan Caraway, amongst others, in addition to his first-round knockout win over Garbrandt. “It was my first loss, but I was a very hard fight for him, and I knew I had just fought one of the best guys.

“Before I fought him, he beat TJ Dillashaw, and in that moment, I realized that this is where I’m supposed to be — competing alongside the best fighters in the world.”

Now he will welcome Edgar to the bantamweight ranks. 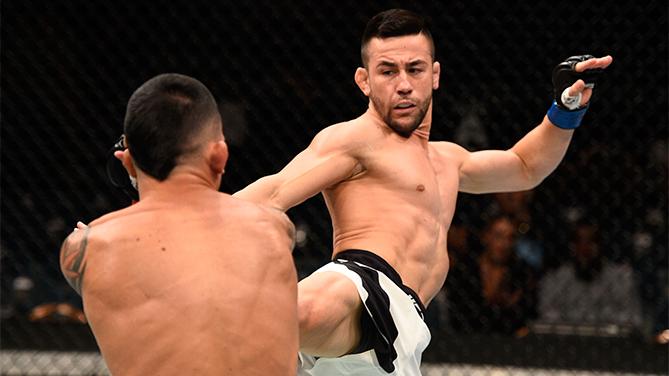 The former lightweight champion spent the last seven years as a permanent resident in the Top 5 at featherweight, challenging for championship gold on three separate occasions while sharing the Octagon with a Murderers Row of talent in the 145-pound division.

But victories have been hard to come by for Edgar over the previous two years, as “The Answer” has struggled to a 1-3 record in his last four fights, with first-round stoppage losses to Brian Ortega and Chan Sung Jung bookending that collection of appearances.

Now the Toms River, New Jersey native seeks to re-establish himself as a contender in a new division for the second time, just as he did in 2013 when he decamped from lightweight, with Munhoz happily serving as the man standing between Edgar and immediate entry into the bantamweight title chase.

“Without a doubt I’m excited to share the Octagon with a guy with such a big name and get to do what I love,” said Munhoz, who hasn’t fought since his loss to Sterling and is champing at the bit to get back in the cage.

“Some people wanted me to say something bad about Frankie, but the only thing I can say is that he’s a good fighter; he’s a legend. Like me, he has a family and I’m grateful I can share the Octagon with another guy that was a champ, another guy that I grew up watching.

“That’s not going to take anything away from me wanting to go out there and knock him out or be the first one to submit him,” added the Brazilian, just in case there was any confusion about his intentions on Saturday night.

Just as with the fight against Garbrandt, Munhoz believes he’s slightly better than Edgar in every area, save for wrestling, and is looking forward to proving that this weekend in Las Vegas. 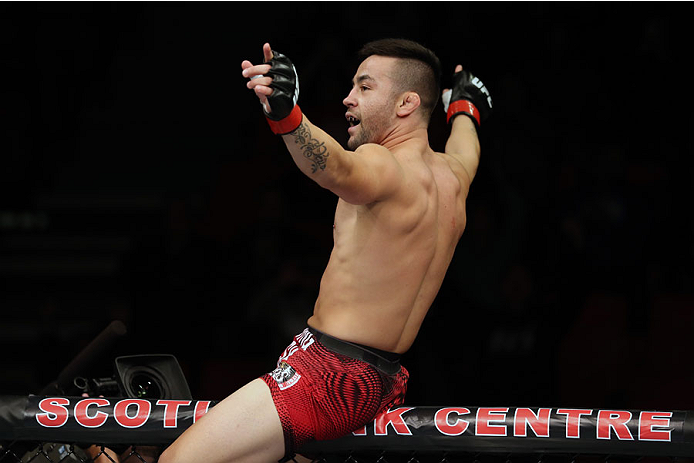 “It’s going to be a good scrap,” he offered. “Frankie is a guy who has good speed, who doesn’t have a lot of holes in his game; he’s a veteran. Besides the wrestling, I believe I’m a little better in every other aspect and I think I’m in my prime right now. I believe I’m more powerful than he is and, at the end of the day, I’m going to prove all this.

“I’ve had a lot of time to work on being more patient, setting things up better since my last fight with Aljamain Sterling,” added Munhoz, who feels he made some strategic mistakes in his loss to the presumptive No. 1 contender. “You’re going to see the same aggressive guy as always, but I’ve had a year and something to correct some of the flaws in my game.

“I’m a different fighter than I was a year ago — I keep growing, I keep learning — and I’m going to go get the finish against him and then get a title shot.”

While an opportunity to compete for the bantamweight title might not be available to Munhoz right away should he make good on his prediction to finish Edgar this weekend, stopping the highly respected new arrival to the division should earn him the credit and recognition he’s long deserved.