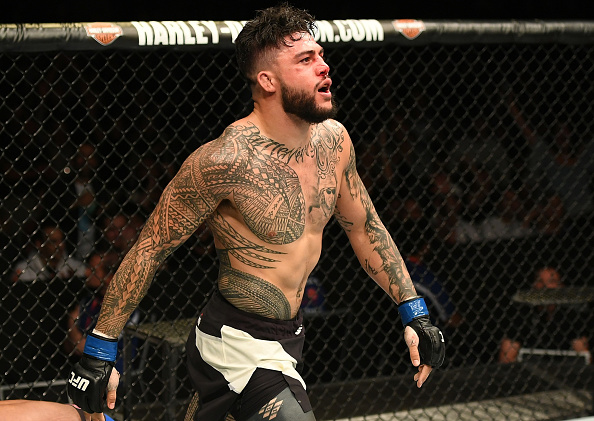 Tyson Pedro of Australia celebrates his submission victory over Khalil Rountree in their light heavyweight bout during the UFC Fight Night event at Rod Laver Arena on November 27, 2016 in Melbourne, Australia. (Photo by Jeff Bottari/Zuffa LLC/Zuffa LLC via Getty Images)" align="center" />
In most families, wanting to be a UFC fighter makes you a rebel. Not so for Tyson Pedro, who fights Paul Craig this Saturday at UFC 209: Woodley vs. Thompson 2.

Taking a desk job might have been the rebellious option for the 25-year-old light heavyweight, whose father John is a pioneer of the Australian mixed martial arts scene, and an accomplished martial artist in his own right.

“My father originally brought King of the Cage to Australia, one of the first cagefighting shows in Australia, and he had a lot of experience in traditional martial arts. He has seven black belts in seven different styles,” Pedro said ahead of his fight at T-Mobile Arena in Las Vegas. “I would say he is one of the pioneers in Australia of mixed martial arts in its infancy.”
RELATED: Pedro featured as a Fighter on the Rise | Matchup with Paul Craig

John Pedro, who once coached retired UFC fighter James Te Huna, was his son’s first martial arts instructor. While the younger Pedro has also sought out different coaches, most recently training at the famed Jackson-Wink MMA Academy in Albuquerque for Saturday’s fight with Craig, his dad continues to play a key role in his fight career.

“We’ll be working on stuff and he’ll come and go, ‘No, I want you to do this.’ If there’s one thing my dad’s good at, it’s hurting people, so he knows if I’m not hurting someone enough.” Pedro said. “He’ll be in my corner, he’s always in my corner because it’s also the mental side for me. Dad’s big on the mental aspect of the game, and that’s why James (Te Huna) and all of the earlier fighters liked having him there as well.”

Pedro has had a much quicker path to the UFC than most fighters. His November 2016 UFC debut at UFC Fight Night: Whittaker vs Brunson in Melbourne was just his fifth professional fight.

But the undefeated Pedro says his record doesn’t tell the whole story.

“I’ve been sparring with people that have been in the UFC for a long time, and I’ve done rounds with professional boxers when I was doing amateur boxing,” he said. “Even though my record is 5-0, I feel like I’ve got a lot more experience than what that shows, and I knew I was going to be in the UFC whether it was in six months, or a year or three years. It was always gonna be the goal. But yeah, it was a little bit surprising how quickly it happened, and everything falling into place and me getting that spot on Melbourne, but I also envisioned this happening. So it was just a matter of time for me.”

Even so, Pedro may not have envisioned his UFC debut against Khalil Rountree unfolding exactly as it did.

He was stunned early in the first round by a heavy left from Rountree. After some scary moments, Pedro quickly 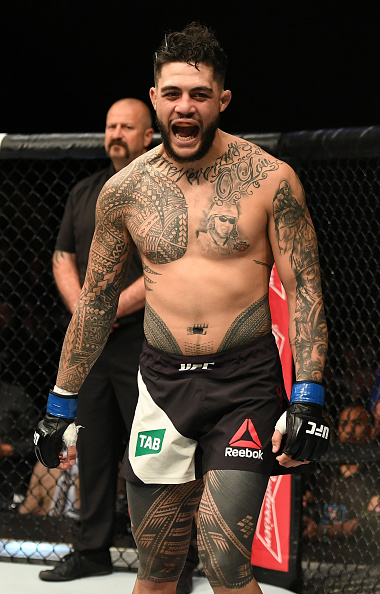 rebounded, staying composed as he dragged his opponent to the mat for a rear naked choke victory at 4:07 into the first stanza. It was a baptism by fire for Pedro, who denies feeling any first time UFC Octagon jitters.

“I didn’t experience Octagon jitters, touch wood. I’m pretty good with that and I don’t really get nervous because I just enjoy it so much. I think the one thing I’ve learned is just to try and move my head and not get caught with that big punch again (laughs).”

The Western Sydney native, who was all smiles before he stepped into the cage against Rountree, says that was no poker face.

“When I’m walking out I’m actually just enjoying the song, enjoying the moment. That’s what I’m doing fighting for, because I actually love fighting. It’s not a show, it’s not fake; I’m coming out because I’m happy that I’m getting to do something that I’ve loved since I was a kid. To be getting paid to do what I love is an awesome thing for me.”

In the 29-year-old Paul Craig, Pedro takes on another undefeated prospect, a Brazilian jiu-jitsu brown belt with a 9-0 record and eight of those victories coming by submission.

Pedro, also a BJJ brown belt, says he isn’t intimidated by his opponent’s submission game. and the Sydney native believes he is the more well-rounded fighter.

“I know he’s a pretty slick jiu-jitsu fighter, but I’ve always said it’s MMA, so it’s hard to pick one facet of the game and say you’re the best at it because there are so many varying aspects. I’ve got a lot of strengths that people haven’t been able to see yet and hopefully I get to show them come 209.”

And having finished all of his opponents in the first round thus far, he offers an unsurprising prediction for his fight on Saturday.

“I’m coming for a first round finish.”