Pedro: "Beating a Legend is How A Legend is Made"

While veterans can struggle with inconsistency, embark on a winning streak or take several losses in a row without losing much ground in the divisional chase or opinions about their overall capabilities changing, the result of every fight for an emerging talent can provoke big shifts in the court of public opinion.

One day, you’re destined for greatness. One loss later, you were never that good to begin with and probably won’t amount to much of anything.

Tyson Pedro has dealt with this harsh reality throughout his UFC tenure. When he came out of the gate with a pair of first-round stoppage wins over Khalil Rountree Jr. and Paul Craig, he was pegged as one to watch in the light heavyweight division. After suffering the first loss of his career at the hands of Ilir Latifi, he was labeled as overrated and nowhere near ready to hang with fighters in the Top 10.

The pre- and post-script from his most recent appearance in the cage this past June encapsulated both, as discussions ahead of his bout with Ovince Saint Preux centered on how a victory would vault the now 27-year-old Australian into thick of the chase in the 205-pound weight class and establish him as the top emerging threat in the division.

Following a quick start where he had Saint Preux on shaky legs, the veteran steadied himself and rallied back, forcing Pedro to tap to an armbar just past the midway point of the opening round.

Landing on the wrong side of the results brought more critiques and criticisms of Pedro and his potential, prompting the gregarious Sydney resident to take to social media and address his detractors, first with a tongue-in-cheek message letting them know he’d jotted down their suggestions for what he could have done better in order to win the fight followed by a more introspective reflection on where he stands in the light heavyweight division.

Standing poolside in Bali, doing his best Van Damme pose, Pedro wrote, “I’m reminded and grateful for where I am today as I’m one of the youngest (ranked) in the UFC LHW division with the least pro fights… so much to learn still and a few things to tweak. In time I will be at the top!”

“Everyone is very critical of my fights — most fights — but I am the most critical out of everyone, so it doesn’t bother me what other people say because I’m already critiquing myself,” said Pedro, who returns to action this weekend in Adelaide, where he faces off with former light heavyweight champion Mauricio “Shogun” Rua. “I’ve already figured out what I’ve done wrong in the fight. I’ve already gone over the fight with a fine-tooth (comb) and tried to grow from there and progress from there, so I think that’s why a lot of things don’t bother me.

“This is a guy that has had 34 fights,” he said of Saint Preux. “There are all kinds of reasons why I lost and it doesn’t bother me because it was a pure learning experience. I think this will be my sixth fight in the UFC and I had four fights coming in.”

Saturday will indeed be the sixth time Pedro makes the walk to the Octagon and just the tenth fight of his professional career. He arrived in the UFC without ever having ventured beyond the first round — and has still only done so once — and has earned three victories in five fights, with his two setbacks coming against a pair of seasoned veterans.

As you might expect given his dual social media messages and overall positive demeanor, Pedro is taking it all in stride, cognizant of the fact that he’s just getting started and doing so on the biggest stage in the sport.

“I’m learning on the job, but I’m enjoying the journey as well,” said Pedro. “The losses come with the wins, but I’m growing more and more each time as well. (The two guys I lost to) are in the Top 10, as well. It’s not an easy place to be doing on-the-job training.”

This weekend, he’ll once again compete alongside his brother-in-law, heavyweight rising star Tai Tuivasa, and veteran Mark Hunt as the trio close out the UFC’s return to Adelaide. 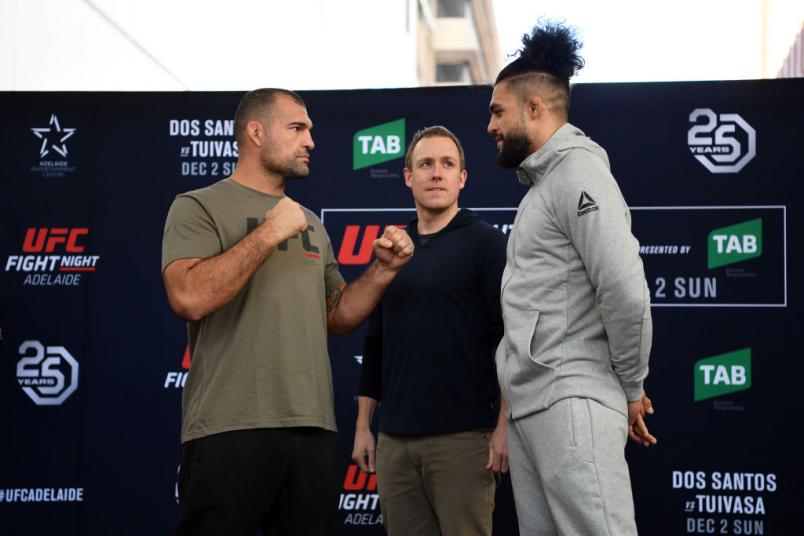 Pedro is up first against Rua, just as he was when the trio competed together at UFC 211 in Perth earlier this year. That night, he kicked off the main card with a first-round submission win over Saparbek Safarov and he’s eager to replicate the results and once again set the tone for the rest of the boys on Saturday night at Adelaide Entertainment Centre.

“I saw this fight beforehand,” he said of the matchup with Rua. “As soon as I saw him take the loss to Anthony Smith, I thought, ‘They’re going to match us up,’ so I asked for the fight and it came through. He’s a legend and beating a legend is how a legend is made.

“I was the one to start it off (in Perth). Once you come back in that dressing room and you come in with a win, you see the smiles on their faces and they’re all pumped — I love being the first one. I get to do it first. I get to start it off. That’s just an added bit of excitement and pressure that I love.”

If everything goes according to plan, a more subdued after party than what transpired in Perth is the next order of business, with Pedro opting out of the ‘shoey’ tradition his heavyweight running mate enjoys, followed by a seven-day getaway with his wife.

And then it’s on to next year, which could feature some even bigger opportunities, although Pedro knows the key to unlocking all of that is handling his business this weekend in Adelaide and that is precisely what he plans on doing.

“I have been previously known to partake in the ‘shoey’ tradition, but I think I’m going to try to be a bit calmer at this after party,” Pedro said with a laugh. “We don’t want to rock Adelaide too much; it’s a quiet city.

“I’ve been away from home for a long time now and I’m looking forward to seeing my family for a little bit. But 2019 — don’t worry about that; it’s going to be a big year. There are going to be some big fights, but honestly, I’m not looking anywhere past this fight.”