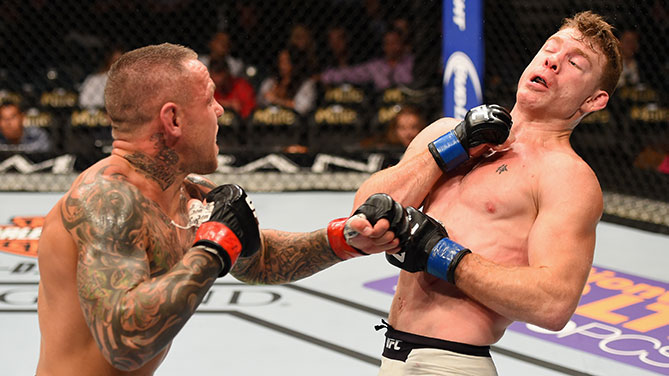 After disappointing losses in July, lightweights Ross Pearson and Paul Felder both wanted quick turnarounds to get back in the win column. In UFC 191 prelim action Saturday at the MGM Grand Garden Arena in Las Vegas, it was Pearson emerging victorious over Felder via split decision in an entertaining scrap that lived up to the pre-fight hype.

“I feel a trilogy coming on between me and Paul,” Pearson said. “This is gonna go down in UFC history with us two. We’re just gonna battle to the end.”

The stand-up war most expected from Pearson and Felder didn’t materialize in the opening round, with much of the fight being fought against the fence. There, Felder got the better of the action with knees and elbows, but Pearson did get a takedown, making the scoring for the round interesting.

Round 2 was more in line with what fight fans were expecting, as the two lightweight strikers kept it standing. Pearson utilized movement efficiently, along with quick in and out shots, but Felder mixed things up nicely with all eight limbs, and he was throwing heat with each one.

The high-quality action didn’t slow down in the final round, each strike thrown by both man designed to do damage and/or end the bout. And while they didn’t finish the fight, they got the crowd roaring, and rightfully so. 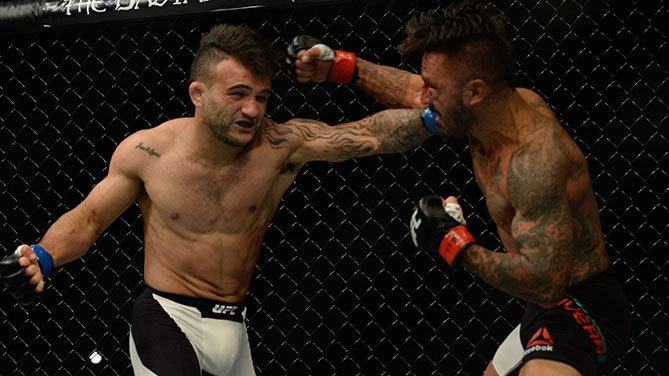 The bantamweight bout between John Lineker and Francisco Rivera was expected to produce fireworks and the pair didn’t disappoint, with the two minutes and eight seconds of fury resulting in a submission win for Lineker in the UFC 135-pound debut for the former flyweight contender.

“I knew that the power was going to transfer to this division,” Lineker said. “It’s David against Goliath.”

The opening minute of the fight was fairly sedate, at least compared to what followed in the second, as an all-out brawl erupted between the two knockout artists, with defense thrown to the side in favor of frenzied exchanges. In the midst of the madness, a left hand from Lineker dropped Rivera, and the end appeared to be near for “Cisco.” But after taking a series of hard shots, Rivera found his way back to his feet and the slugging resumed, and while the Californian landed several hard shots, Lineker didn’t budge, and as the two tangled up, Lineker sunk in a guillotine choke and the two went to the mat. A tap followed soon after, with the end coming at 2:08 of the opening frame. 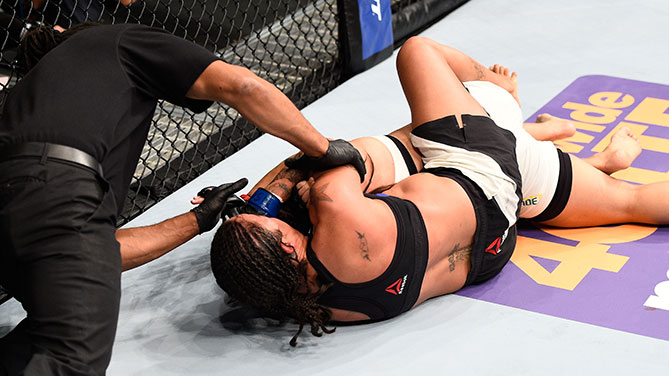 “I want to prove the fighter that I am, and this is just the beginning,” Pennington said.

The first round was fought at a ferocious pace, neither fighter interested in stalling the action. Andrade picked up several takedowns and controlled Pennington against the fence, but Pennington’s dirty boxing techniques scored well throughout, putting her foe on the defensive on several occasions.

With the exception of a brief moment midway through when Andrade fired off an effective flurry, Pennington was a different fighter in the second round as she used her strikes well from long-range, scored a couple takedowns, and then stunned Andrade and the crowd when she sunk in a rear naked choke in the closing seconds of the frame to force a tap out at the 4:58 mark. 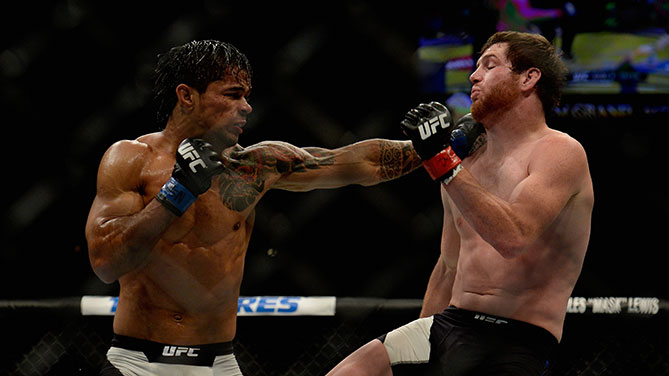 Taking a fight on short notice is always a risky proposition, but it was a successful one for Rio de Janeiro’s Tiago Trator, who won a hard-fought split decision over Clay Collard in a featherweight bout.

Collard had success with his stand-up in the opening round, but it was a late run by Trator on the mat that could have allowed the Brazilian to steal the frame.

As the second opened, Collard clearly wasn’t bothered by Trator’s first round rally, as he confidently fired off his strikes, including a series of spinning backfists – all of which missed. Eventually, a left hand dropped Trator midway through the round, but after some solid ground-and-pound by Collard, the Brazilian began working his ground game. It was Collard back in control by the end of the round though.

In the third, fatigue had set in for both fighters, but while Collard’s attacks got sloppier, Trator still kept his technique intact, allowing him to eke out the close decision win.