Lightweight veteran Ross Pearson was pushed to the limit by Chad Laprise in their UFC Fight Night bout at Brisbane Entertainment Centre, but after three close rounds, it was “The Real Deal” taking the split decision victory.

The first round was close and competitive, both fighters getting in their share of shots. Laprise was effective with his high kicks at times, but Pearson’s kicks to the leg were the more damaging blows, bruising up the Canadian.

The heat got turned up in the second, with Laprise surging for a while, Pearson responding, and Laprise finishing strong. All the while, the two stayed busy and kept the pace high as the judges had the unenviable task of scoring the back and forth action.

Pearson showed a sense of urgency in the final round, but his aggression allowed Laprise to pick away at the Brit, and he landed more and more shots as the frame progressed, but it was not enough to pull out the victory on two of the three scorecards. 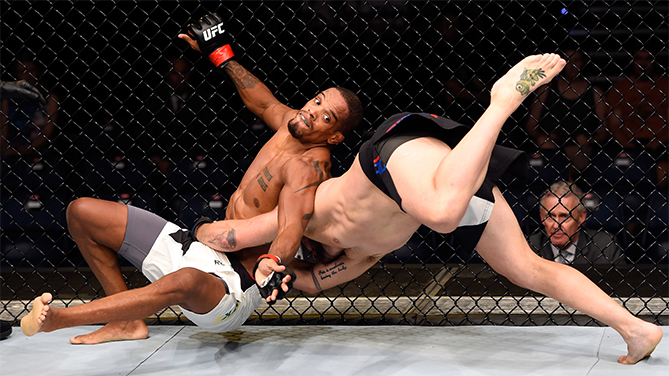 Brown spent the first 2:30 of his UFC career playing defense on the mat, as he avoided two guillotine choke attempts, but from there, he got his legs under him and began working his own ground game, with a kimura attempt briefly putting Patrick in danger. The Brazilian ended the round in control though, capping off a fast-paced frame.

Patrick kept a step ahead on Brown on the mat throughout the second and third rounds, and while the gutsy Aussie did his best to get his submission game going from his back, it was to no avail.