"I feel great, I’m very confident coming into this fight and I’m ready to get in there and showcase it.” - Chad Mendes 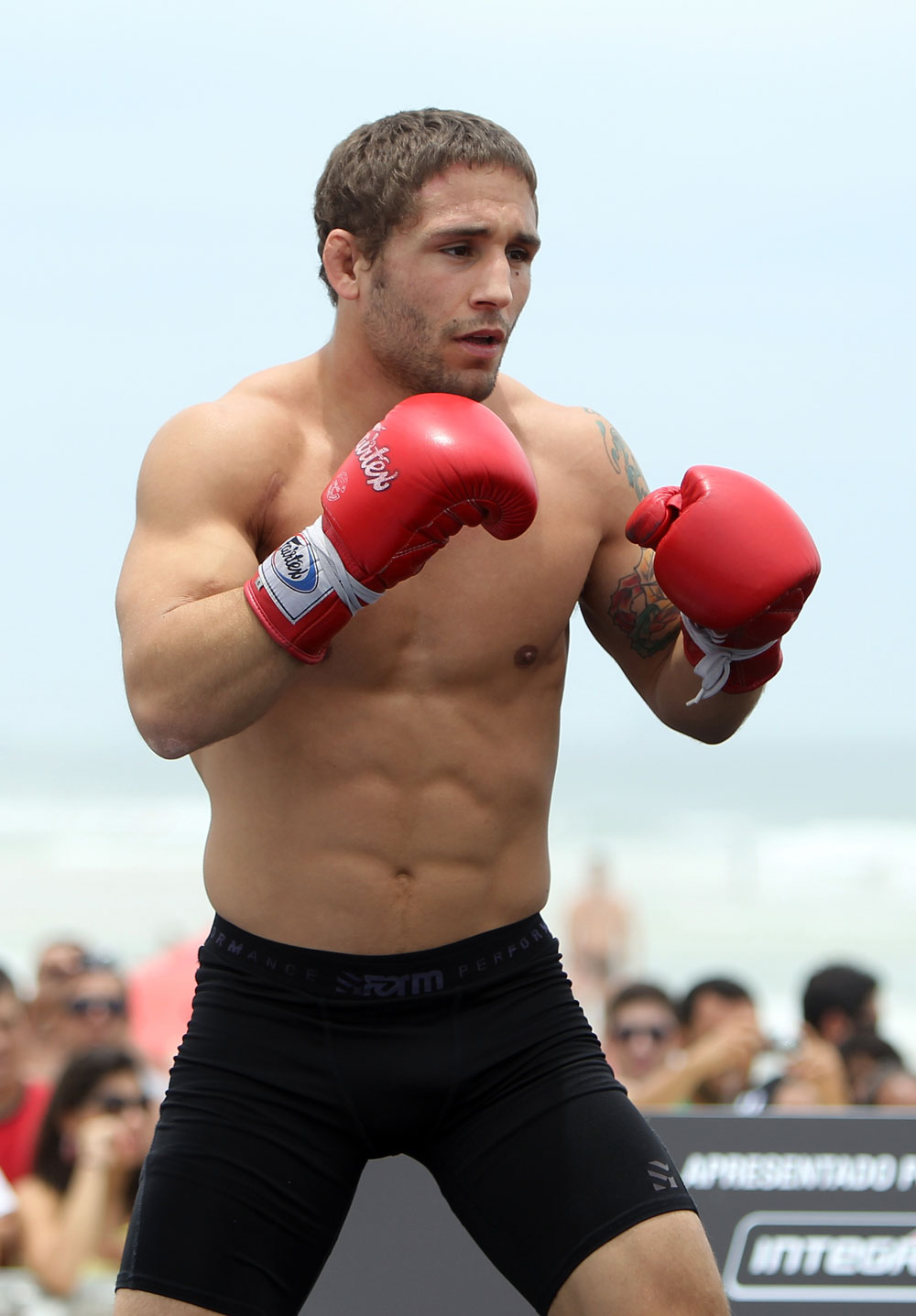 If the next man challenging for Jose Aldo’s UFC featherweight title - Chad Mendes – looks like he’s having the time of his life, he is. It wasn’t always that way for the California native though.

Back when he was dominating the Pac-10 wrestling scene as a member of the Cal-Poly squad, there was little time to smell the proverbial roses or take a breath to enjoy the ride. Sure, Mendes won two Pac-10 titles, was a two-time All-American, and was one victory away from a national title in 2008, but when it was over, it was almost as if he was so obsessed that he couldn’t even remember what had happened, let alone enjoy it.

“I remember through high school, and even a lot through college, I had that tunnel vision, and looking back on it, I’m like ‘it went by so fast,’” Mendes recalled. “And all I thought about was that, and I never really took the time to step back and look back at my accomplishments and give myself a pat on the back. It was just go, go, go, go.”

So when he decided to take his talents to the world of mixed martial arts, obviously a world title was the goal, but in the process, he was going to savor every moment of his second athletic life.

“I kinda took the tunnel vision from going through wrestling, and looking back on it and seeing how it was then, I told myself when I got into this that this is gonna be something that’s fun,” he said. “I can’t do this my entire life. I probably have a good ten year run at this, and I’m gonna do everything I can to get as good as I can and do my best, and soak it in and enjoy every minute of it. And I think that’s what I’ve been doing, and it’s been awesome.”

It’s also been a ride few could have predicted. Yes, Mendes was an ultra-talented wrestler, but to go from Square One to a world title shot this Saturday in the main event of UFC 142 in Rio de Janeiro in less than four years as a pro is nothing short of astounding. It’s even taken Mendes aback at times when he thinks about it.

“A little over three years ago, I was still in college and watching (teammate) Urijah (Faber) do his thing and I just kinda looked at it and said ‘man, this is something I feel like I can be good at and I want to get into it and try,’” he said. “It’s been a fast ride to where I’m at now, and it’s been great and a wonderful experience. I’ve got to travel all over and meet a lot of people and get to fight in front of a bunch of fans and it’s been great. It’s crazy to think that in a little over three years that I’m fighting for the world title in a main event for the UFC. So stepping back and looking at that is definitely a huge accomplishment for me.”

Beating the seemingly unstoppable Aldo would be even bigger, and even though the 26-year old Mendes has a year on the 25-year old champion in terms of age, when it comes to experience, the Brazilian has been fighting professionally since “Money” was a freshman in college. If that doesn’t put Mendes’ rapid rise into perspective, nothing will. But he’s here for a reason, with an 11-0 record and the unquestioned number one contender’s spot. That’s not to say there weren’t difficult times when the idea of mixing striking and jiu-jitsu in with his wrestling was just overwhelming.

“You have to realize that there are going to be peaks and valleys, so you need to step back, look at what you’ve been doing wrong and just fix it,” said Mendes. “Especially in the beginning, all I had was my wrestling, and I was going in there against guys that in wrestling I would demolish, but they’re submitting me in every single thing possible because I just didn’t know what I was doing. And it was really frustrating, and I started second-guessing a little bit, but then I stepped back, figured out what I was doing wrong, and like any other sport, you just practice it and get good at it.”

And in a fight sport, you get better by fighting, and Mendes has yet to disappoint. Turning pro in 2008, Mendes won his first five bouts before getting called to the WEC in 2010. There, he turned back Erik Koch, Anthony Morrison, Cub Swanson, and Javier Vazquez, making it evident that he was one of the top 145-pounders in the world by the time he made his UFC debut in 2011, beating Michihiro Omigawa and Rani Yahya in his two outings last year. So what’s the secret? Perhaps it’s just staying true to his roots and not trying to show off the new wrinkles in his game every time out, while still adding weapons to his arsenal that he will pull out if necessary.

“Nowadays, you’ve got to be good at everything,” he said. “I know my wrestling is my strength and it’s what I’ve been doing since I was five, but a lot of the time you’ve got to train other things and you’ve got to get out of your comfort zone. Wrestling for me is my comfort zone, so a lot of times if I’m getting hit in the standup, I automatically take the guy down, where sometimes you’ve got to force yourself not to. But wrestling is my strength and my body has grown and adapted to that because it’s something I’ve done my entire life, so it’s always gonna be my strength and always something I’m gonna go to. But I think in this day and age you’ve got to be well-rounded. Sometimes it’s hard because you get in that mindset where I think wrestling feels so fun right now that it’s all I want to do. But I know that boxing or kickboxing is something I’m not as good at, so I’ve got to train that. Sometimes you’ve got to put the stuff that you’re almost craving to do on the backburner to learn the other stuff.”

Against Aldo, he’ll need to adjust at a second’s notice if necessary, but that shouldn’t be an issue for him, especially since the champion has been on his radar for over a year. There’s even been so much talk about the two fighting that it could almost be at the point where Mendes never wants to hear the name Jose Aldo after Saturday night.

“I honestly don’t think it’s gonna be anything like that anytime soon. If I do go out there and beat him, I think we’re both top level guys, so we’re probably gonna end up fighting each other more than once. It’s something that’s part of the sport and something we’ve got to do, but I’ve definitely been watching intently and I’m super pumped and ready for this fight. Honestly, this is the best cardio and conditioning shape I’ve ever been in, and I can almost even say throughout my wrestling career, so I feel great, I’m very confident coming into this fight and I’m ready to get in there and showcase it.”

It almost sounds like he’s got that wrestling tunnel vision back, but even with all his focus solely on Aldo, he has let a little light in when it comes to thinking about getting a championship belt around his waist.