Paul Sass - Taking the Basics and Making them Look Spectacular

"I go out there to try and finish the fights as quick as possible, and as soon as I grab hold of something, I won’t let go." - Paul Sass 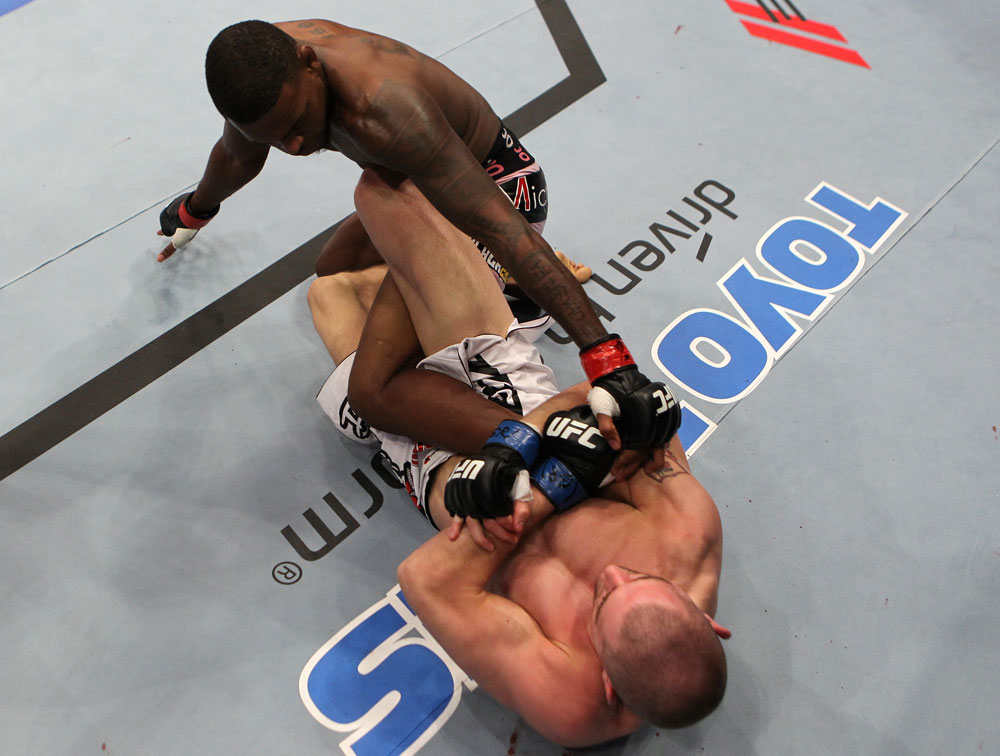 Practice, practice, practice. It’s not the glamorous answer as to how Paul Sass has become so good at making people give up when he fights them, but if you ask him the secret, he’ll let you know in his own humble way that it’s really no secret at all.

“I’ve just been practicing since Day One,” said the man who has finished nine foes with his trademark triangle. “I ended catching it in my first class, and ever since I’ve just been doing it and doing it, and it’s worked out to help me out in my fights as well.”

That’s an understatement. Like Chuck Liddell’s right hand or Anderson Silva’s front kick, Sass’ triangle has become something to avoid at all costs in bouts against the Liverpool lightweight. And along with his countrymen John Maguire and Phil De Fries, the 24-year-old is killing the myth that only standup fighters emerge from the UK. In fact, when Sass first went to the local MMA gym as a teenager, he gravitated immediately to jiu-jitsu.

“My mate started MMA and I asked if I could go,” said Sass. “He was doing Thai as well, but at first, I didn’t really like the Thai, I just liked the jiu-jitsu, so I was just doing the jiu-jitsu classes. I was doing that a couple times a week and I just built my way up and I started doing the Thai classes and the wrestling classes and it just worked up from there. But jiu-jitsu is the main thing that I like.”

And after a few amateur fights and one semipro match, Sass put everything together and challenged himself on the pro MMA circuit, making his debut on the day after his 19th birthday, August 5, 2007 with a 74 second submission by (what else) triangle choke over David Johnson. Soon, he realized that he was good, and that he could make a career out of a sport that was starting to take off throughout Europe.

“After a couple pro fights, I realized that I was winning all the time, so I said maybe I’ll start doing this full-time,” he recalled. “And probably after my fourth pro fight, I started training fully, every day, twice a day, and I just carried on from there.”

By the midway point of 2010, a win over current UFC fighter Jason Young set the stage for Sass’ UFC debut in October of that year, and he showed no first time Octagon jitters whatsoever in dispatching Mark Holst in the first round and picking up Submission of the Night honors in the process.

After dealing with a yearlong layoff due to injury, Sass returned with a step up in competition against The Ultimate Fighter 12 finalist Michael Johnson, and he passed the test, using a heel hook to submit “The Menace” in three minutes. In his most recent bout, he made his Las Vegas debut in May, picking up another Submission of the Night bonus for his triangle armbar finish of Jacob Volkmann. His success rate is uncanny.

“I go out there to try and finish the fights as quick as possible, and as soon as I grab hold of something, I won’t let go,” he said. “Say I have a foot lock, I’m gonna keep hold of their foot until I try and finish it as much as I can. I’ll constantly pull guard until I get my way really (Laughs), and I’ll try to pick up on their mistakes and try to finish the fight.”

Again, it sounds easy, but it’s not, and his bout this Saturday may be his toughest yet, as he gets a home game in England against underrated veteran Matt Wiman, who has won four of his last five, including victories over Mac Danzig and Cole Miller. Sass hasn’t seen a lot of The Ultimate Fighter 5 veteran, but he did share a card with him in Washington last October.

“He fought on the same show as me in Washington, and he’s a tough opponent,” he said. “I don’t think he’s ever been submitted either, so I could be the first person to submit him.”

Five of Wiman’s six losses have come via decision, with one (against Spencer Fisher in 2006) coming by knockout. So if Sass can get the Coloradan to tap, he would be the first to do so. But as far as finding the magic hole in his opponent’s game to capitalize on this weekend, he’ll leave that up to his coaches at Team Kaobon in Liverpool.

“I let my coaches look through their fights,” he said. “I don’t like watching their fights myself. My coach will help me out by watching them, and I’ll do whatever my coach says.”

Sass chuckles, knowing that whatever magic people think he pulls on fight night isn’t anything mysterious or written in the stars. It all comes down to hard work, practice, and rock solid technique. And there’s another piece to the puzzle, one that involves looking no further than the one step ahead of you. So when you ask him where a 4-0 record in the UFC would put him if he wins against Wiman, you’re barking up the wrong tree.

“I haven’t really thought about it,” he said. “I’ve been thinking about fighting my next fight, and as soon as I win that one I’ll be thinking about who I’m getting next. So it ends up being Matt Wiman now, and hopefully, I’ll get the win and see what comes next.”

In other words, all work all the time?

“So far, it’s been work all the time (Laughs), but after this fight I’ll have a few weeks off and have some fun and go out a little bit.”

He’s earned it, especially if he can show US fans watching him on the main card of this weekend’s FUEL TV broadcast just what all the buzz is about.

“Hopefully, they’ll see me submit a guy who hasn’t been submitted before,” said Sass. “And I’ve won 12 of my 13 fights by submission, and 11 in the first round, so hopefully it will be a quick submission.”