“When they call me, I say yes,” began this 155-pound standout. “When they call my manager, he says yes. We’ve just got this agreement that I’m here to get to the top, to be the best. I’m not one of those guys that’s dodging people or turning fights down for easier fights. Everybody in this organization is a tough guy, so why not fight the tough guys that have a number next to their name? I’m just trying to take that fast track to the top.”

If you said number two-ranked contender Donald “Cowboy” Cerrone, you would be close, but not correct. The young man who uttered the words above is none other than one of Cerrone’s training partners, unbeaten Paul Felder, and when he says them, you understand why the two are friends. It’s also why when Felder, 10-0 as a pro with two wins in the UFC, was approached with a fight against number seven-ranked Edson Barboza, “The Irish Dragon” put his money where his mouth is and took the fight without hesitation.

“This is even better than Jim Miller, which was supposed to be my next fight,” he said. “I beat Edson, that’s gotta put me in the top 15, I would think, and then I just keep going from there.” 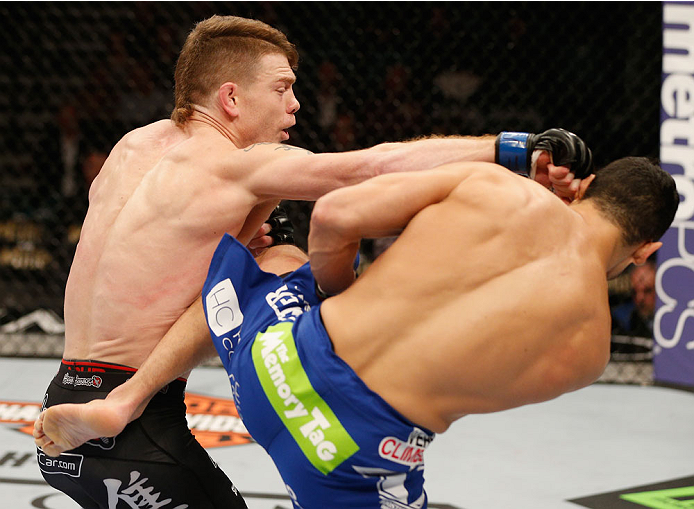 The fact that anyone actually takes a glance at Barboza’s Knockout of the Century finish of Terry Etim or his leg kick clinics against Rafaello Oliveira and Mike Lullo and describes fighting him as better than anything just boggles the mind. Better than root canal maybe, but not by much, especially since the Brazilian Muay Thai expert has the ability to perform his own dental work on fight night. But Felder is not like the other lightweights, something evident when he talks about what he expects on Saturday in Chicago.

“I fought a lot of wrestlers, so this is a chance for me to really put on one of those gritty, back-and-forth, bloody, legs hurt, limping around kind of performances,” he said. “Granted, I hope that doesn’t happen. I hope I go out there and punch him right in his face and he falls down (Laughs), but let’s be honest. He’s a tough guy and he’s a good kickboxer, and I’m looking forward to it. I think we’re gonna meet in the center of the cage and have at it.”

Felder, 31, is like a lot of fighters from a certain part of the country that have achieved an almost mythical reputation for their toughness. If you call yourself a Philly fighter, you better be able to go above and beyond the call of duty in search of a win. Felder is a Philly fighter.

“Look at (fellow Philadelphian and fellow lightweight) Eddie Alvarez,” Felder said. “I don’t think he knows how to win a 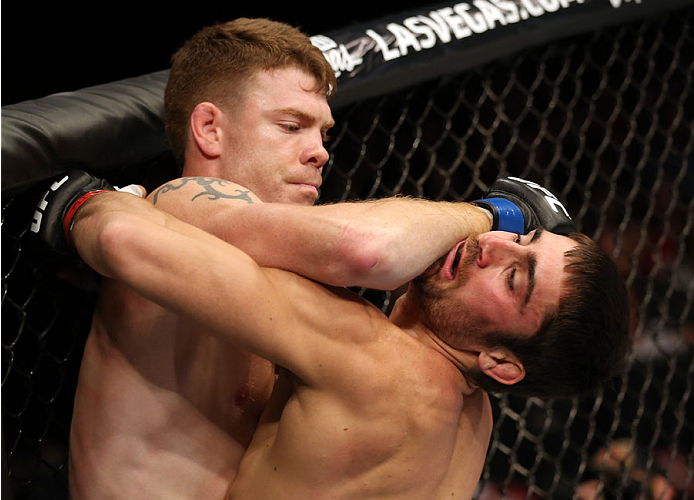 fight until he’s been punched in the face 15 times. He’s just a scrapper. He’s from Kensington, I’m from South Philly, and I think we’re both from areas where we grew up getting into street fights and maybe getting our ass kicked a lot. I didn’t win all my street fights when I was younger. I got into a lot of scraps and I might have gotten beaten up, but anybody that’s ever trained with me will tell you that it only makes me more mad and makes me go forward ever more the more that you hit me and the more you think you’re winning.

“I’m not afraid of a fight and I feed off that,” he continues. “If my nose is bleeding, I’m gonna wipe it off and try to punch you in the face. It’s just who I am. It’s not disrespectful, it’s just fun to me. It hurts, but when you look back on it, I’d rather be that guy that just stood there and threw down, as opposed to somebody that ran away and lost a decision.”

Just like he does when he takes on whoever is placed in front of him, Felder has lived up to his words on fight night as well, earning seven of his 10 wins by knockout, including a spinning backfist finish of Danny Castillo in January that earned him a Performance of the Night bonus. That came in quite handy for the new father, who is also a hit on social media following the biggest win of his career.

“Things have changed,” he admits. “I get a lot more fans hitting me up on social media on Twitter and Instagram and following me. It’s kind of funny to see how you go from absolutely unknown to people saying ridiculous things like ‘the next champ.’ So I take it all with a grain of salt. I enjoy it, and the bonus has helped my life out, especially since I just had a little girl, so that couldn’t have come at a better time in our life to get that extra money from the UFC. Things have been good – I’ve just been dying to get back in there.”

He’s only got one more day to wait. Then, just the way Paul Felder likes it, it’s on.