Since He Announced His Retirement in May, Paul "The Irish Dragon" Felder Has Been Training For A New Competition
By THOMAS GERBASI, ON TWITTER: @TGERBASI • Jun. 30, 2021

It was event week for Paul Felder, and he was ready to go on June 6. But this wasn’t like the other event weeks “The Irish Dragon” had experienced, not by a longshot.

“Anybody that knows me as a fighter, I am so used to spending fight week so miserable, missing home, dialed in on I gotta lose weight, gotta make 155, gotta do it, gotta look good doing it,” he said. “To have a week with a competition at the end of it where I'm spending the proper time tapering and eating - purposefully eating a lot of food to fuel myself for a competition - it felt amazing, and I was actually not good at it because I kept not eating enough.”

Felder laughs the laugh of someone who is still a competitive athlete, but not a professional prizefighter anymore. The June 6 event wasn’t a fight, but the Ironman 70.3 in Virginia, a triathlon event that requires competitors to swim 1.2 miles, bike 56 miles, and run 13.1 miles.

A day like that can make you wonder whether getting punched in the face is a better option, but in his first time as a triathlete, the 37-year-old killed it, coming in 23rd in his age group and 135th overall in a race with 1,378 finishers. In other words, Felder’s not too bad at this stuff, and when asked if he’s ready to toe the line again, he says, “I don't think you even need me to answer that question knowing that you've interviewed me for fights for how many years. Of course, I thought, 'Oh, I gotta do better than that.' (Laughs) But I did pretty well, all things considered.”

Pretty well is an understatement, but that’s always how Felder carried himself as a fighter. He was never one to beat his chest and shout his merits from the mountaintop but, at the same time, he was a realist and someone always honest about where he was in his career. So it wasn’t a big surprise that on May 22, Felder decided that after 23 pro fights, it was time to retire from the sport of MMA. Now that’s just as an active fighter, as the longtime lightweight contender will continue to call the fights as an Octagonside analyst, but as far as strapping the gloves on again, he’s content with his decision to walk away.

“I'm still young, I'm still fresh, I'm sharp, I can do the acting thing, I'm doing the commentary already, I'm racing now, I'm meeting new people and athletes through that, and there's something that's lining up to keep me plenty busy,” Felder said. “I don't need to fight. The fights weren't there that I wanted and the guys below me deserved the opportunity to fight those higher-ranked guys. So it made sense to go. Other things are exciting me more than fighting is anymore.”

Like racing triathlons. And not just showing up but trying to beat whoever is on the course with him.

“I'm training for this like I'm trying to win these things,” he said. “Today (June 22) was a three-hour ride on the bike in my garage on the trainer, and an hour and ten-minute three-thousand-yard swim afterwards in the pool. I burn like 5,000 calories a day. I eat whatever I want now. (Laughs) It's a crazy new world that I've entered in, but I think it was the perfect thing I could have found to fill the void that I needed to fill, because if I didn't have something, I would have probably stuck around too long. I probably would have fought more and went way longer than I needed to because I didn't have that spark, that drive for something that wakes me up every day.”

At the time that he made his retirement announcement during a UFC Fight Night broadcast, Felder was ranked ninth in the world at 155 pounds, a feat built on memorable wins over Alessandro Ricci, Stevie Ray, James Vick and Edson Barboza, as well as an unforgettable war with Dan Hooker and a Fight of the Night battle with Rafael Dos Anjos that would ultimately be his final fight. Oh yeah, he also beat some guy named Charles Oliveira who just happens to be the new UFC lightweight champion. Now that would be a storyline – Oliveira attempting to defeat the last man to hand him a loss while Felder gets his long-awaited title shot.

Yes, Felder thought about it briefly.

“I can tell you, that at least made it a little bit harder, where I'm like, I beat this dude with elbows and TKOed him and nobody even knew how good this guy was, and he goes on to become champion of the world in my weight division,” he laughs. “But, at the same time, I get to walk away and say right when that guy wins the belt I'm the last guy to beat him.”

That’s something to be proud of, as he should be proud of the 15 fights he gave UFC fans from 2014 to 2020. No, he didn’t win a title in the Octagon, but he showed up to fight every time his name was called, and there’s something to be said for that. Better yet, he made his mom, his girlfriend and his daughter happy when he called it a day and moved on to the next chapter in his life.

“I think everybody was just making sure that it was really what I wanted and that I wasn't doing it for them,” said Felder. “Because they made it clear that they were kinda getting ready for it to be done a while ago, especially my mom being the worst, of course. She was ready for me to hang it up six years ago (Laughs), or even before that, before I ever did it. Christine (Felder’s girlfriend) didn't want it to get to the point where I was doing it just to do it and if my heart wasn't in it. I think that became pretty apparent over the last year, since the pandemic. I kinda lost that edge towards the sport. And once that goes, then it's time.”

That didn’t stop Felder from making the walk one more time, though, and when Islam Makhachev was forced to withdraw from a November 14 main event with Dos Anjos, it was the Philadelphian who stepped up for the fight. On November 9.

That was Felder the Fighter in a nutshell. He didn’t win against Dos Anjos, but he showed up on weight, ready to fight and he gave the fans one more stellar effort. For five rounds, no less. It wasn’t the storybook ending for his career, but there was a story there, just like there appeared to be one for each of his UFC fights, whether it was dealing with being away from his daughter Aisling, his relationship with his mom, Marian, or the loss of his dad, Tom, to pancreatic cancer. Even fights like the one with Ricci in 2017 had something attached to it to make you care and get emotionally involved in what happened when the Octagon door closed.

Watch All Of Felder's Fights On UFC Fight Pass

“I was coming off a loss, and that was the first time that I ever trained with Duke Roufus and I lived in the basement of his gym in an old office with a futon for that one,” laughs Felder, who agrees that his fights weren’t just fights.

“There was a story there, and that's what the best fights do to us,” he said. “The fights have always been a show to me; we're putting on a show, so for me to have some kind of personal circumstance that would feed into each one of these camps, so it wasn't just a performance but an entire eight to ten weeks, each one was different, whether it was Aisling, or family, like my dad passing away, whatever was going on with me and Christine at the time, my mom, they've all had something.”

What they did was let us know who Paul Felder was and what made him tick. He wasn’t just the guy showing up to throw down and take one to give two back for 15 or 25 minutes. He was a flesh and blood human being, an ordinary guy doing extraordinary things. And while some of his peers just want to fight and embrace that part of it, Felder was all-in for the whole process of going through camp, handling media obligations, and then making that walk.

“In a way, I'll miss the whole thing, because that, to me, is built into the fight,” he explains. “What gets in there and what excites us in there can be a million different things and, for me, it was definitely the whole process. I had to suffer and it had to be almost like a Rocky-type thing for me because that's, in my mind, what training camp was. And then the interviews and thinking of all the things that were driving me for the fight, that's what got me into the cage. If I didn't have that stuff, you'd have to piss me off, and then I'd still throw down. I've been in fistfights, but the only thing making me do it professionally was the whole build-up. Even the weight cut, I miss hanging out with (nutritionist) Ian (Larios), I miss a little bit of that suffering and doing s**t that other people will never do in their lifetime. I think that's what excited me.” 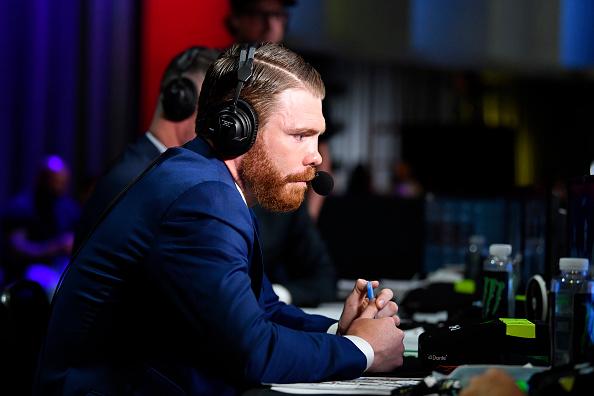 UFC lightweight Paul Felder announces his retirement from mixed martial arts while live on broadcast during the UFC Fight Night event at UFC APEX on May 22, 2021 in Las Vegas, Nevada. (Photo by Chris Unger/Zuffa LLC)

Now, it’s swimming, biking and running with a new group of crazies pushing themselves to places most wouldn’t dare to. And after the first one, it’s clear that he’s found a new competitive home.

“The race itself, the swim went better than I ever would have thought it would,” Felder said of his 70.3 miler. “The bike was a blast - it was up through the Blue Ridge Mountains and it was like crazy climbs, over 3,000 feet elevation gain, crazy downhills, like 40-something miles an hour on them, just zipping past people, but the bike kinda crushed everybody and it's the first time that they've done it on this course in Virginia, ever, so nobody really knew how bad that bike course was gonna be, so everybody on the run looked like zombies. We're all running, it's 90 degrees with humidity that day, there was not a cloud in the sky to stop the sun. Those are the worst running conditions possible.”

And this is what he’ll do for fun in retirement?

“You don't fight in the UFC for seven years and get to the top 10 without having a little bit of crazy competitiveness in you, so thank God for this stuff,” he said.

This is true. But the million-dollar question awaits: is mom happy that he’s hung up the gloves and moved to triathlons?

“My mom still managed to get stressed out about how I looked afterwards because she said it looked like I was cutting weight,” Felder laughs. It’s a good laugh, the laugh of someone in a good place after a career well fought.