Find out why Paul Felder decided to step into a main event bout with Rafael dos Anjos on five days short notice, how he's feeling and more.
By Thomas Gerbasi, on Twitter: @TGerbasi • Nov. 13, 2020

One might say it takes a special kind of person to accept a fight with former UFC lightweight champion Rafael Dos Anjos.

But then again, that same person may be even more special because he is voluntarily training for a triathlon at the same time.

Meet Paul Felder - lightweight contender, UFC broadcast analyst, girl dad, all-around good guy, but someone who has built himself a mansion on the road less traveled.

“When I knew I was getting towards the end of this MMA career, and we're not there yet - I'm obviously fighting this weekend and I still feel like I've got some more fights in me - there's got to be some exit plan and some kind of fitness thing that I'm gonna be into where I don't want to be getting hit in the head for the rest of my life,” said Felder when asked about his new interest in triathlons. “And I needed something that's gonna keep me motivated and keep me training and watching these guys and looking up Ironman training and stuff like that, I said, okay.”

Just like that, “The Irish Dragon” was in and preparing for a race that includes a 1.2-mile swim, a 56-mile bike ride, and a half-marathon run. Yeah, getting punched in the face sounds a lot less painful, if only because it will end faster.

But, if anything, this training was a good reason why Felder was able to step in earlier this week to replace Islam Makhachev in Saturday’s UFC Fight Night main event in Las Vegas.

At lightweight. In a five-round fight. Not bad for a guy who was serious about retirement after a grueling and exciting 25-minute war with Dan Hooker in February that he lost via split decision.

“It was always gonna be about what excites me to do this,” said Felder on his return. “And when I got the call, I was on the treadmill, doing my workout, and just the idea of stepping in on this short notice and facing a legend like RDA, it brought that fire back that I absolutely needed, and that's why I did it.”

Felder wasn’t even concerned about the weight cut, and for good reason, as he hit his mark at 155.75 pounds on Friday.

RELATED: RDA Has Reinvented Himself | Khaos Williams Is A Fight At Heart | Tony Gravel Is Ready To Get The Ball Rolling

“I was within a manageable place to even do the weight cut, and that's one of the reasons I took it, because normally five days, forget it, I wouldn't even be close to making 155,” he said on Wednesday morning. “But now, with everything I've been doing, I feel in fantastic shape, my body's fresh, my mind is fresh, so I said, f**k it, let's save the day and get another main event before the end of the year.”

Felder did save the day, and no one on social media let him forget it. That show of respect from fans, the media, and especially his peers, was gratifying for the 36-year-old Philadelphian.

He may not have expected it, but he earned it the hard way, both in the Octagon and in the gym. It’s been a hard-fought career thus far from Felder, yet as punishing as the fights may be, being away from his family and friends, especially his daughter Aisling, has been worse than going to battle with the likes of Hooker, Edson Barboza, Mike Perry and Charles Oliveira. So, in a way, maybe getting a short-notice assignment like this is exactly what the doctor ordered for him. 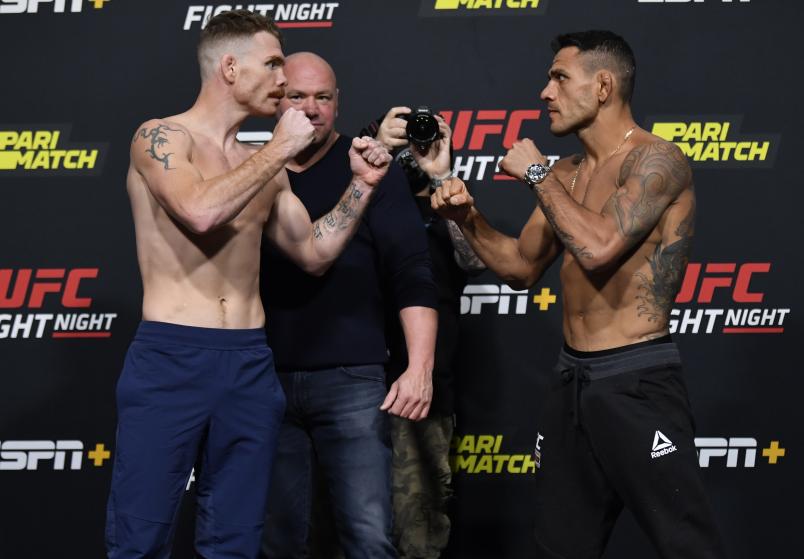 Paul Felder and Rafael Dos Anjos of Brazil face off during the UFC weigh-in at UFC APEX on November 13, 2020 in Las Vegas, Nevada. (Photo by Jeff Bottari/Zuffa LLC via Getty Images)

“That was a big part of it because going away, being away and suffering and thinking about the fight and thinking about everything for eight to 10 weeks at a time was starting to really wear on me mentally,” he said. “But fighting has never really been the issue. It's been everything else associated with it.”

This week, it’s been all about the fight. And after Saturday night, it’s a good bet that there will be another. And Felder knows exactly what he wants.

"If I win this fight on Saturday, my next one, I want another main event or a big fight on a pay-per-view, to put me in a spot so that can make a run for that title,” he said. “And if it doesn't work out, then I gave it another big go and I won't regret it later in my life when I am officially retired.”