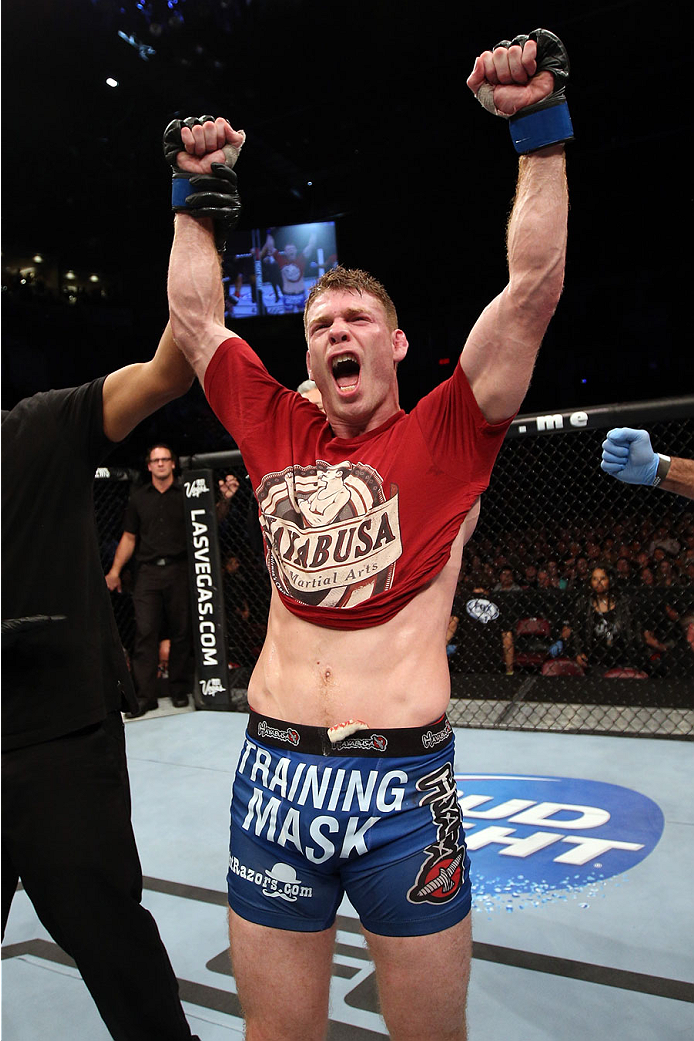 Opportunities arise in the strangest places.

For an undefeated rising talent like Paul Felder, the first big window to open up came when he received a call to make his UFC debut back in October. “The Irish Dragon” was one day removed from defending his title for a different promotion, but when the sport’s biggest stage came to call, he was sure enough going to answer with everything he had to give.

The 29-year-old Philadelphia native found success in his first showing inside the Octagon as he edged out Jason Saggo via split decision at UFC Fight Night: MacDonald vs. Saffiedine in Halifax, Nova Scotia. In that fight, Felder essentially walked into his opponent’s backyard and picked up the biggest victory of his young career. Yet, while the fight and defeating Saggo were watermark moments in his journey through mixed martial arts, the entire experience of his sudden arrival to the UFC was nothing short of surreal. Felder loved every moment of it and all the sacrifices to make his dream come true were all validated on his run through Nova Scotia.

“I had just made a title defense in another promotion I was competing in and one day later got the call from the UFC,” Felder said. “It was a total rollercoaster. I went out and trained with Donald Cerrone and he helped me get ready for my debut. It was just all a whirlwind, man. Next thing I know I’m in the sauna with Rory MacDonald and all these different guys I’ve watched fight many times before and I’m running into Miesha Tate at the supermarket out there. I felt like a little kid and it was really exciting to get that energy boost all over again.

“I knew I was going to be the underdog fighting a Canadian in Canada. I knew I had to go in there and throw down and that he was going to try to take me down. I’m used to that because it’s been happening my entire career, but we got the ‘W’ in his hometown and that felt great. It was all super-surreal and validated all the hard work and sacrifices I’ve made to get to this point in my career.”

While his first experience under the UFC banner was a memorable one that allowed him to put some critical experience under his belt, it also showed him the importance of being ready, willing and able to capitalize on opportunity when it presents itself. Furthermore, Felder also came to understand how avenues can be created and for that he has a great example in his close friend and training partner in hard-charging perennial lightweight contender Donald Cerrone.

“Cowboy” is notorious for his willingness to face all comers at any time or place the UFC will allow, and while Felder admits there are categorical differences in the way they approach elements of their training and preparation, they share the same mentality when it comes to the fight game. This was never more obvious in the manner in which Felder’s next bout inside the Octagon would come to fruition.

He and Cerrone and the rest of their squad were rolling home after a training session when Felder found out that Rustam Khabilov had been forced out of his bout with Danny Castillo at UFC 182. The Albuquerque transplant was already slated to face Johnny Case in Boston at Fight Night: McGregor vs. Siver on January 18, but landing a bout against “Last Call” would be a much more high-profile fight.

Felder posed the potential matchup to his teammates in the van, and fate took over from there.

“I was in a van with Cowboy and all of our trainers in Albuquerque and was flipping through Instagram of all things,” Felder said. “I saw that Rustam was out of his fight with Castillo and asked the guys if I should text Joe Silva and tell him I want that fight. Cowboy turned around and said, ‘Hell yeah you should.’ I didn’t think I had much of a chance to get the fight because Danny has a bigger name in the division so I text Joe Silva a text that said, ‘Castillo?’ Next thing you know I got the fight.

“It’s a big fight for me but it’s the entire reason I’m here in the UFC. I want to become one of the top 10 and one of the best in the world. If I can take a short cut to making that happen then why not? Some guys talk trash and get big fights. Some guys get crazy knockouts. Some fighters troll Instagram and find out one of the top fighters in the lightweight division needs an opponent. I get an opportunity like this….hell yeah I’m going to take it. What do I have to lose? Nothing. It’s a total gain for me. I get to throw down with Danny Castillo, and if I beat him, my next fight will come from the top 10 or top 15. That’s why I’m here and I wasn’t going to pass up that opportunity.”

With the ideal scenario in place, Felder will walk into the Octagon at UFC 182 and look to pull off the upset against the Team Alpha Male staple. The Sacramento-based fighter has been a solid force in the lightweight ranks over the past three years, and is on a recent stretch where he’s found victory in three of his past five showings. That said, even his two setbacks were hard-fought affairs as he was edged out by Brazilian striking machine Edson Barboza last December, then out-wrestled by Tony Ferguson back in August.

While Castillo has built his success from a solid wrestling base, his overall game has expanded, and his striking has become dangerous over this recent stretch. Nevertheless, Felder recognizes the progress his opponent has made but fully expects Castillo to revert to his old ways once the heat starts flying inside the Octagon.

“Danny’s striking has definitely improved and he’s scored some knockouts and knocked down some tough dudes,” Felder said. “I expect him to come at me flinging some big punches, and when that doesn’t work, and he’s eaten enough knees and elbows, he’s going to go back to his wrestling. It’s something I’ve been working on a lot and I’m ready for it. Danny made it in this sport by being a pretty boss wrestler, and when the tide turns on him in this fight, that’s what he’ll go back to. I’ll be ready to stuff the takedowns and finish the fight.

“This is a huge opportunity and I’m ready to show the UFC I’m a guy they can count on to step up and take big fights and put on the kind of fights the fans want to see.”