Paul Felder is Back in the Saddle 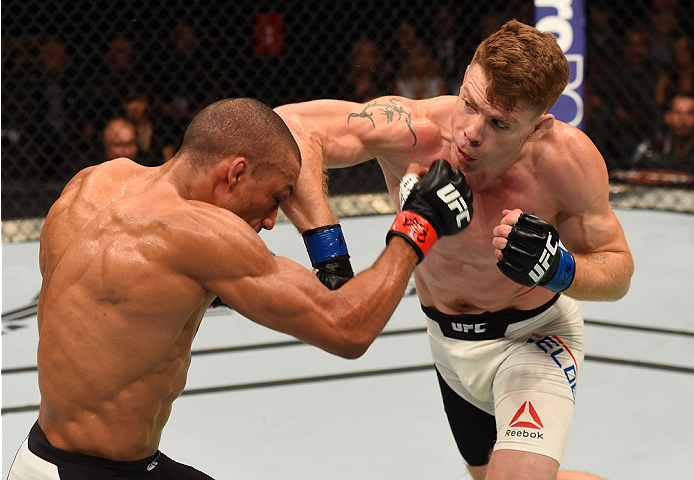 By the time he steps into the Octagon on Saturday night, it will have been six weeks to the day that Paul Felder faced Edson Barboza and suffered the first loss of his mixed martial arts career.

The bout – which originally started as a matchup between Anthony Pettis and Myles Jury before the Brazilian replaced the former champion and Felder replaced the injured former TUF contestant – was an entertaining affair. It was a back-and-forth kickboxing match between two talented strikers, and heading into the final five minutes, it was anybody’s fight. Ultimately, all three judges saw it in favor of Barboza and the UFC rightfully saw fit to award the duo Fight of the Night.

While the extra bank soothed some of the physical pain that came from going 15 minutes with an accomplished striker like Barboza, Felder - who jumps right back into action this weekend against veteran Ross Pearson in the final bout of the UFC 191 preliminary card - admits that nothing can take the sting away from no longer seeing a zero in his loss column.

“I like to think it has, but every time I see my record, it upsets me and gets me bummed out,” acknowledges the Philadelphia native, who preps for his fights as part of the crew of like-minded maniacs assembled at Donald Cerrone’s BMF Ranch outside of Albuquerque. “I know this sport and I’m not dumb – I know there are very few of us, if anybody, that will every go undefeated for their entire career, but man, it would have been really freakin’ cool to beat a Top 10 dude and remain undefeated.

“At the time, I really thought I did enough and that kind of hurts more,” Felder, who posted one of the top knockouts of 2015 over Danny Castillo in his previous outing before sharing the cage with Barboza in Chicago, adds. “It was one round where if I just sat down on my punches more and pushed forward, I could be in the Top 15 right now and I think that’s what drives me nuts more than even the loss. I let such a huge opportunity slip away from me just because I thought I was winning in the moment, but you don’t always know when you’re in there.”

Putting that loss behind him and “wiping the slate clean,” as he says, is part of what has Felder stepping right back into the fray this Saturday against former Ultimate Fighter winner Pearson, a fellow kickboxer also making a quick return to action after coming out on the wrong side of the scorecards in July, but it’s not his sole motivation.

Like his pal Cerrone and several of the regulars that train at his ranch, Felder looks at fighting like a freelancer who knows the only way to put money in the bank is to take on another assignment.

“It’s our job and we really look at it like that as a group,” he says of the cast of fighters that includes Titan FC lightweight champ and former UFC fighter Pat Healy, Aussie veteran Kyle Noke and newcomer Jonavin Webb. “We get paid to fight, and if you don’t fight, you don’t get paid. And until that day comes when I’m the champion, I have to fight to move forward and get to those top-ranked guys.”

And for Felder, a matchup with Pearson was the perfect opportunity to pick himself up, dust himself off and get right back in the saddle.

“I feel like the more I sit around and think about it, dwell on it, the worst it will be for me mentally,” the 31-year-old lightweight admits. “The quicker the better, because if I had to wait until December or January, it would just be more and more pressure to get that win again.

“If it was somebody else, I might have just waited a little bit, but it was such a good opportunity to fight a tough, scrappy kickboxer like Ross. We’re two dudes that I think are really going to get in there and let it all hang out. I had just fought a kickboxer, so I really just had to continue to get better and change things because his style is different than Edson’s and dangerous in different areas.

“Getting back on the horse, fighting a tough guy like Pearson and getting the win, that’s exactly what I’m after,” Felder says. “Then taking some time off, but (after that) I want to fight another Top 15 guy. First I’ve got to get through a tough S.O.B. and a brawler and it’s no easy task.”

In addition to being no easy task, it’s also a pairing that carries serious Fight of the Night potential, even on a deep Pay-Per-View card that features a co-main event where both fighters have won consecutive bonuses and a main event with two of the most dynamic and energetic fighters in the entire sport. And though Felder knows that extra check isn’t going to come his way every time out, that doesn’t mean he not going to try to get one.

“Getting bonuses is always something I want to do every single fight,” he says, again channeling some classic “Cowboy,” who is one of the most accomplished paper-chasers in the UFC. “Obviously it’s not going to happen, but I’m always trying to put on a show.

“It’s actually not even about trying,” he says, self-correcting. “I just think the way that I am as a fighter, I can’t help but get scrappy in there, whether it’s pretty or not.”