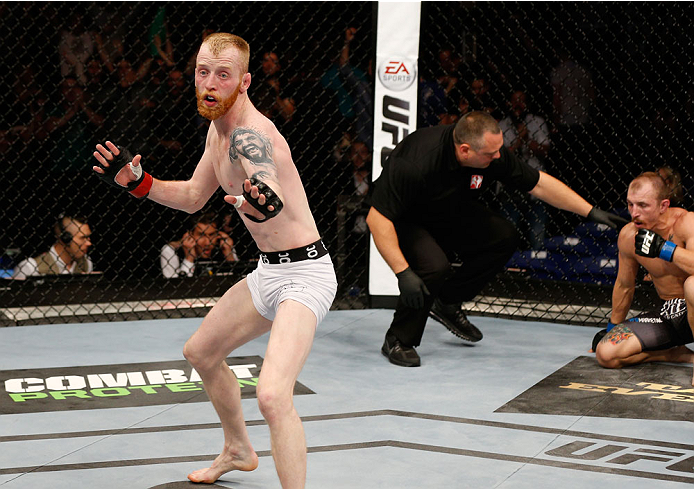 Most of the media attention in the aftermath of July’s UFC event in Dublin focused on the big wins by Conor McGregor and Gunnar Nelson, as well as the remarkable comeback by Cathal Pendred and the atmosphere in the O2 Arena. But it was the flyweight member of the SBG Ireland Gym who got everything started that night, as Patrick Holohan submitted Josh Sampo in the opening fight of the card, setting the tone for perhaps the greatest night in Irish MMA history.

“I didn’t feel that pressure thing,” the unbeaten Holohan said. “I’ve heard someone saying that you’ve got 99 problems, but 86 of them are in your head. I wanted to walk out that door first. I said that and I knew I was going to be on that card. I said the UFC aren’t gonna not put me on that card, and it made sense for them to put me on first because I get that place started no problem. And it was nice to be able to set the mood for the rest of the guys as well and put the fear into the other opponents that we weren’t even fighting. They knew we meant serious business.”

They did, with the Irish contingent, which included fellow flyweight Neil Seery, going unbeaten on the card, a result that thrilled the 9,500 in attendance and announced to the world that Irish MMA had arrived. It was a magical night for those on the winning end, and you wonder – if only on an emotional level – how does Holohan top it as he heads into his second UFC bout this Saturday against Chris Kelades?

“You don’t top Dublin,” he said. “You know what you do with that Dublin thing? That’s in the bank already. We’ve already got that. That’s for that day when you’re lying on your death bed and you want to go back through your thoughts. It’s in the bank.”

It’s really the only way to approach things, and the 26-year-old from Tallaght has a great way of whittling fighting down to its most basic elements and not building things up in his head to the point where he can’t perform on the night. So despite a late change in opponent from Louis Gaudinot to Kelades, and the reality that his head coach, John Kavanagh, will be in Stockholm cornering two of Holohan’s teammates – Nelson and Pendred – on Saturday, “The Hooligan” is unbothered by any of these developments. He’s trained, he’s prepared, and he’s ready to fight.

“That goes back to that 99 problems thing,” Holohan said. “John is absolutely amazing, but I actually want to see if I can do it. I went to Vegas on my own and fought on The Ultimate Fighter on my own, and there’s no doubt I need John in my life as my coach, but he gives me the guidelines I need. These are little guidelines – we’re not talking about essays, we’re not talking about sitting down and breaking down video. When it comes down to it, there are only so many styles in the world, and I think mentally tough is not just getting hit in the face and being able to go forward; mentally tough is being able to spot what is going on in someone else’s head at certain times of a fight or certain times of life. That’s mentally tough.”

And when it’s all said and done, no one puts the gloves on under the lights but the fighter.

“You’re gonna have to get in there and do it yourself anyways,” he said. “No one’s getting in there to do it for you. I’m trained and I’m more than ready to be fighting anybody. That’s how I think. We will hunt together but we will eat alone, and that’s the way it is.”

That’s not to say Holohan is a stone-faced statue unable to enjoy the ride a bit. Quite the contrary, as he is one of the most affable fighters in a gym full of them. Talking to Paddy Holohan is no chore, and as he’s finding out, there are more people than ever looking for a few words with him after his win over Sampo.

“We come from a fighting nation in Ireland and people that would be really into fighting would have known about this and known about us already, but now it’s starting to get different,” he said. “I’ve got neighbors that are in their 60s and 70s and they say ‘fair play to ya, we wish you the best of luck. Drop over for a cup of tea.’ (Laughs) And to me, that’s when you’ve made it in Ireland, when the grannies in the shops and the older people are saying ‘oh, you do that kickboxing stuff, don’t you?’”

The friends of the President of Team Hooligan, Holohan’s six-year-old son, are a little skeptical though.

“He’s kind of like me,” the proud papa said of his son. “He takes it in stride. He doesn’t see what other people see. To be honest, most of the kids don’t believe him. I’ve had to present myself for a few six and seven-year-olds a few times and say ‘yes, I am Patrick Holohan and I am his father.’ (Laughs) It’s pretty mad, but I’m still me. I have a better car, I have better runners on, but I’m still Paddy Holohan.”

And that’s been good enough to make it in this hardest of games, but he doesn’t approach it as an arduous task; not even close.

“It doesn’t have to be a struggle or a stress all the time,” he said. “There’s a way to do it and enjoy it as well. You know what they say, a happy worker is a good worker. I wake up every day happy. This is not for everybody, but you can use this to get what you need to make you happy. And this is what I’m happy doing. I don’t expect everyone to do this and be happy, but this is what I do, and I love my job.”