"I want to push guys as hard as possible and give them a way out, basically. Make them say ‘oh shoot, I don’t think this is right for me.’" - Patrick Cummins 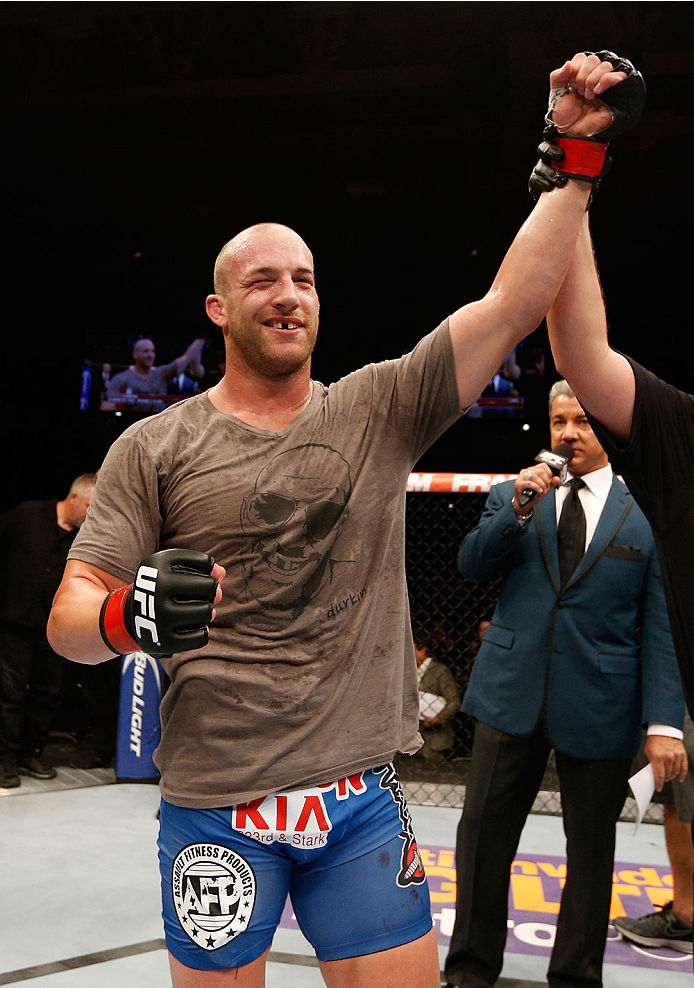 It was the first fight of the night at Tingley Coliseum in Albuquerque, New Mexico, but for Patrick Cummins, his bout against Roger Narvaez in June might as well have been the co-main event at the Mandalay Bay Events Center in Las Vegas.

Vegas was where Cummins made his UFC debut on short notice against Daniel Cormier four months earlier, losing his undefeated record in 79 seconds. Now he was opening up the show against newcomer Narvaez, and it was the biggest fight of his career. If he won, he began the process to fulfilling the potential fight observers saw in him before UFC 170. If he lost, well, he was 0-2 in the UFC, facing a cut from the organization, and perhaps not who those aforementioned observers thought he was.

After a slow start, Cummins stopped Narvaez in the second round for his first UFC win. He could breathe again.

“After my first fight, I just thought ‘I can’t wait for that next one, because I need to get this feeling off of me,’” he said. “And until I got that next win, I was going to be down. So I’m back to my winning ways, it feels good, and now I just want to keep it rolling.”

He didn’t waste time to keep that roll going, getting on the phone to the UFC the day after the victory over Narvaez, offering to face the returning Kyle Kingsbury this Saturday night in San Jose. He got the fight.

“I’ve got to make up for lost time,” said the 33-year-old Pennsylvania native, who only had four fights in his previous three years as a pro. “The reason I got into fighting was because I felt like my competitive days weren’t over, so competing once a year doesn’t quite fill that hole. (Laughs) That’s the reason why I’m in it – I want to compete. Plus, I need to get that experience in the Octagon. That’s the major thing that I’m lacking. The more times I throw myself in there, the better.”

That means he doesn’t mind traveling up the coast from his adopted hometown in Dana Point to San Jose to face a hometown favorite and be the “bad guy.”

“I’m okay with that,” laughs the affable Cummins. “I always do well going into somebody’s hometown and picking up a win. I feel like I’m not fighting to make friends. At the end of the day, I’m here to beat people up, and that usually doesn’t result in good friendships.”

No, but in this business if you do it well enough, it results in a move up the rankings and eventually into the title picture. And if you’re really good, you may just become a world champion. That would be a life changer for the former Penn State wrestler, but just like the Narvaez fight, upward mobility depends on spoiling Kingsbury’s first fight since 2012.

“He’s decent in every situation, and I’m kind of similar, but I’m better,” said Cummins of the former Ultimate Fighter competitor. “Whichever way he wants the fight to go, I feel comfortable that I’ll be able to beat him in any way.”

And putting the pressure on early and often could be the ticket to seeing if Kingsbury is truly ready for the rigors of the fight world once again.

“I think that’s always my game plan,” said Cummins. “No matter what the situation is, I want to apply that pressure. I feel like my endurance is my strong suit, so I want to push guys as hard as possible and give them a way out, basically. Make them say ‘oh shoot, I don’t think this is right for me.’ Especially for him, he’s coming off a long layoff, and I want him to question whether he made the right decision to come back.”

Cummins has no qualms about deciding to make a quick return just a month and a half after his last fight. In fact, he believes it will benefit him and show in his performance this weekend.

“Because I’m able to string these two fights together with a relatively short turnaround, I feel like I’m going to be in better shape,” he said. “I basically put two camps together in a row, and I already feel way better than I did preparing for my last fight, and I felt great then. I’m still building on where I’m at and taking it to the next level.”

That next level should be within reach by 2015 if he stays on the right track, but for Cummins, 2014 is far from over, so if he wins Saturday, UFC matchmaker Joe Silva just may see this ambitious light heavyweight’s name on his caller ID Sunday night.