Patrick Cummins: From Coffee to Contender 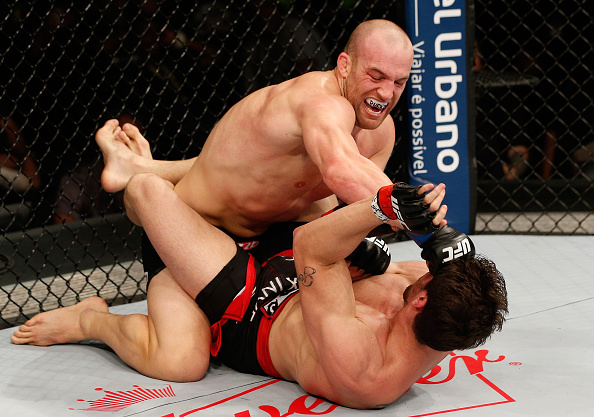 A year ago, it could be said that Patrick Cummins was a cautionary tale, an example of what happens when someone seemingly bites off more than they can chew, ending up on the outside looking in, wondering what just happened.

At UFC 170 in February of 2014, Cummins lost in 79 seconds to unbeaten former Olympian Daniel Cormier. The Pennsylvania native was unbeaten as well, but with only four pro fights against competition that wasn’t near to that of Cormier, that was a distinction in name only. Add in that Cummins took the fight on short notice, replacing the injured Rashad Evans, and it was the worst possible way to make a UFC debut.

But Cummins said “yes,” and there is something to be said for that. To have the guts to take on a world-class fighter without a full training camp and with no Octagon experience was worthy of praise, not ridicule, regardless of the end result. Yet when it was all over, Cummins had to wonder whether he had what it took to compete at the UFC level, despite all the odds against him.

“I definitely had that thought, but it was more just being down, and once I got over being down over the whole thing, I went back and looked at the fight and saw the good things I did and saw the mistakes I made,” he said. “I felt, okay, I do belong here. I just made a mistake and it was understandable, I think, considering everything that was going on around me. But looking forward, you had to learn from that, and in the future, you have to learn to deal with that situation better.”

His willingness to step up to save the show’s co-main event guaranteed that Cummins would get another shot in the Octagon, and that shot would be against another unbeaten, Roger Narvaez, in June of last year. For Cummins, there was ever more pressure to get things done because while most expected Cormier to win their fight, if he lost two straight, he was likely going to be headed elsewhere for the time being.

“I don’t think a lot of people understand that pressure,” he said. “You know what you’re capable of, but you have to go out there and do it right now. There’s no room for error. That fight coming back, that was hard.”

For some, that could be the worst part of the fight game, the reality that as good as you may be, if you’re not on when it counts, you can – and probably will – lose. For others though, it’s the best part.

“It is part of the draw,” Cummins said. “You might be the best guy, but you’ve got to be the best guy at that particular moment and I think that’s what makes a true champion. If you have a bad night, you still gotta be able to win, but 90 percent of the time, you need to put on that performance that you know you’re capable of when you need to do it.”

Cummins put on that performance against Narvaez, stopping him in two rounds. A month and a half later, he was back, decisioning Kyle Kingsbury, and by December, he turned an 0-1 UFC record into a 3-1 Octagon slate by outpointing Antonio Carlos Junior.

When this crazy year was over, Cummins’ manager Ryan Parsons commended him on a job well done in the Carlos Junior fight.

“He said ‘yeah, that was a great fight, good job. I think you’re at about 50 percent of your potential right now,’” Cummins laughs. “But that’s what I want to hear. To be the best, you’ve got to be super hard on yourself, and looking back on it, I agree with him. And that’s where I’m at. I’m always hungry to take that next step, and I’m looking for that hundred percent of my potential performance.”

This Saturday, that next step truly is one, as he faces the number eight-ranked Ovince Saint Preux in a Newark bout that could push him even further up the light heavyweight ladder. A year after his lone loss, he’s in a much different place, but still with a familiar mindset.

“In a lot of ways it’s the same, but in a lot of ways it’s different,” he said. “I find myself still wanting to prove myself to everybody. I haven’t put on my best performance yet, and I’m still hungry to do that. So in that way it’s very similar, but it’s also very different. Coming off my first loss, that’s a whole different feeling. Right now I have three wins under my belt and I feel a little bit more established and I’m in a much more positive place in my life. I’m gaining momentum and I feel good about where I am. I just want to keep chipping away at things and get back to that position where I was a year ago and get that second chance and have a better outcome.”

It’s almost a race against the clock for the 34-year-old. Not that he’s old or has looked like it in his last three bouts, but when you consider that the first three years of his career consisted of four fights, he has been trying to make up for lost time experience wise. That meant UFC matchmaker Joe Silva’s phone got plenty of calls from Team Cummins after the Cormier fight.

“We didn’t wait for that call,” he said. “It’s that time off that ticks away at you. You want to get out there and prove yourself right away and get back into it and get back in the win column and be confident again. After February of last year, that was the game plan for the rest of the year – get as many fights and as much experience as I can.”

So with four fights in the bank in 2014, is Cummins going for five this year?

“I feel like I’m already behind,” he laughs. “I’m gonna have to take a couple Cowboy Cerrone fights back-to-back if I’m gonna catch that. But I still want that volume. I need that constant competition. I feel like I’m improving all the time, but the experience is what I’m lacking, and I’m always looking for it, and any time I can jump in and take a fight, I’m gonna do it.”

These days, you can throw Cummins in the same sentence with folks like Cerrone and Benson Henderson who want to fight as often as they can. That’s the storyline on him now, and it’s preferable to when he was referred to as the Battlin’ Barista for his pre-UFC job in a coffee shop.

“The coffee stuff finally calmed down a little bit, and I think that’s pretty nice.”