Patrick Cote: For the Love of Fighting 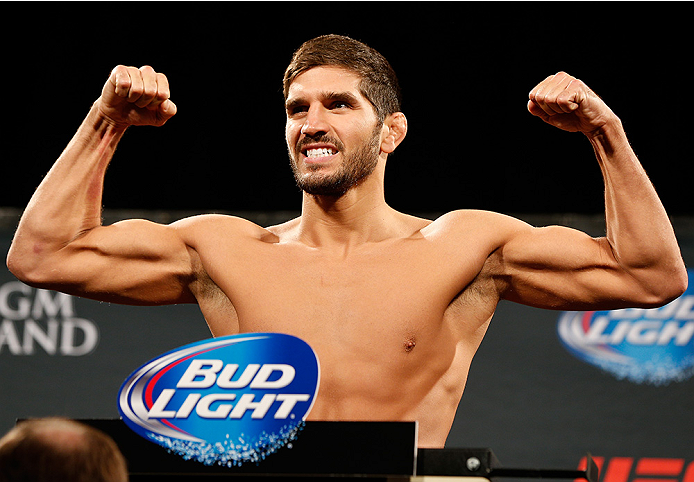 There comes a time in every athlete’s career where a subject they would much rather not discuss becomes one that is impossible to avoid – retirement.

While the subject is raised with all high profile athletes for several different reasons – injuries, declining skills, age, rampant media speculation – there are times when the topic comes up because a combination of circumstances creates what feels like a potential Hollywood ending and there aren’t too many athletes that get to go out in that kind of situation.

John Elway won back-to-back Super Bowls with the Denver Broncos and then called it a career, leaving at the highest point possible. Dominik Hasek hung up his skates after winning a second Stanley Cup with the Detroit Red Wings and Lennox Lewis walked away from the boxing ring as the heavyweight champion.

Heading into UFC 186, Patrick Cote is being asked about retirement because the traditional elements fans and media look to when trying to craft the ending to a strong career are present, as the 35-year-old Cote competes at home in Montreal against fellow veteran welterweight Joe Riggs in the final preliminary card bout of the evening.

A victory in his hometown in fact of a packed and partisan crowd at the Bell Centre seems like an ideal way to go out, except for one thing.

“I still enjoy fighting,” Cote, who made his professional debut in November 2002 and competed on Season 4 of The Ultimate Fighter, says. “I’ve won seven of my last nine fights. I’m still able to compete at this level.

“I have a lot of things outside of fighting – I have a real estate business, I’m working a lot on TV – and I’m doing this because I’m still passionate about it, not because I need it.

“I have no reason to walk away right now,” he continues. “I’ve never been knocked out in my life, never been rocked and I had maybe one or two bad performances in my career. I don’t feel like the sport is too big for me yet, so it’s not in my mind. I don’t feel I’m close to retirement yet.”

Though he enters Saturday’s contest with Riggs coming off a loss, “The Predator” has looked good since making the move to welterweight two years ago following a solid career at middleweight that included a shot at Anderson Silva and the UFC middleweight title at UFC 90 that ended unceremoniously when Cote blew out his knee in the opening seconds of the third round.

Most fighters tend to switch divisions when they’re trying to jump start a stalled career or seeking a change of scenery after a string of setbacks, but Cote made the move following a victory, debuting in the 170-pound ranks with a unanimous decision win over Bobby Voelker at UFC 158.

“Those guys at 185 are really, really big and really strong,” Cote says of the current crop of fighters that make up the UFC’s middleweight division. “Six-foot-two, six-foot-three and they walk around at 225 and they’re not fat at 225 – they’re shredded. They’re able to make 185 so it was a smart choice to move down to 170.

“I’ve always been an average middleweight, but at the end, I was a small one, so I prefer to make the sacrifice with dieting. I’ve hired a good nutritionist to make sure I’m healthy and everything is going well fighting at 170.”

After coming away on the wrong side of things against Stephen “Wonderboy” Thompson last time out, Cote will look to once again get moving in the right direction when he squares off with Riggs on Saturday night.

Like Cote, the Arizona-based Riggs is a veteran of the sport, having first stepped into the Octagon at UFC 49. A six-fight winning streak earned the MMA Lab product a second chance to compete on the biggest stage in the sport, but his return to the UFC cage at home in Phoenix last December didn’t go as planned as a neck injury ended his fight with Ben Saunders less than a minute into the opening round.

“A couple years ago we were supposed to fight, but he got injured and the fight didn’t happen,” Cote says. “Joe is a veteran, he has more than 50 fights under his belt. It’s going to be fun. I know his style – he’s a southpaw, very powerful striker, very vicious ground-and-pound.

“There are no surprises with what he’s going to give us – we know exactly how to prepare for this guy and I can’t wait to fight here in Montreal on April 25. Fighting at the Bell Centre is just insane. I fought in so many places around the world and I’ve seen crazy crowds everywhere, but Montreal is just insane.”

More than a dozen years into his pro career and having experienced the highs and lows and everything in between, Cote sounds more excited about fighting at UFC 186 than he has at any other point in his career.

It’s the excitement you hear in the voice of an athlete that is still able to compete at the highest level, still doing what they love and doing it all on their own terms.

“For me it’s more fun to go training and fighting; it’s less stressful,” Cote admits. “I don’t need to fight to live – I live pretty well with everything else, so for me, I don’t have the stress that I have to win this fight to put food on the table. That’s not happening. I built my career for three years now and everything is going pretty well.

“I’m doing it because I still love it and I’m passionate about it, which is why it’s so fun right now.”