"Everything’s going pretty well with me in my fighting career. I know I’m not young anymore, I’m 34 years old, but I feel so good physically and mentally." - Patrick Cote 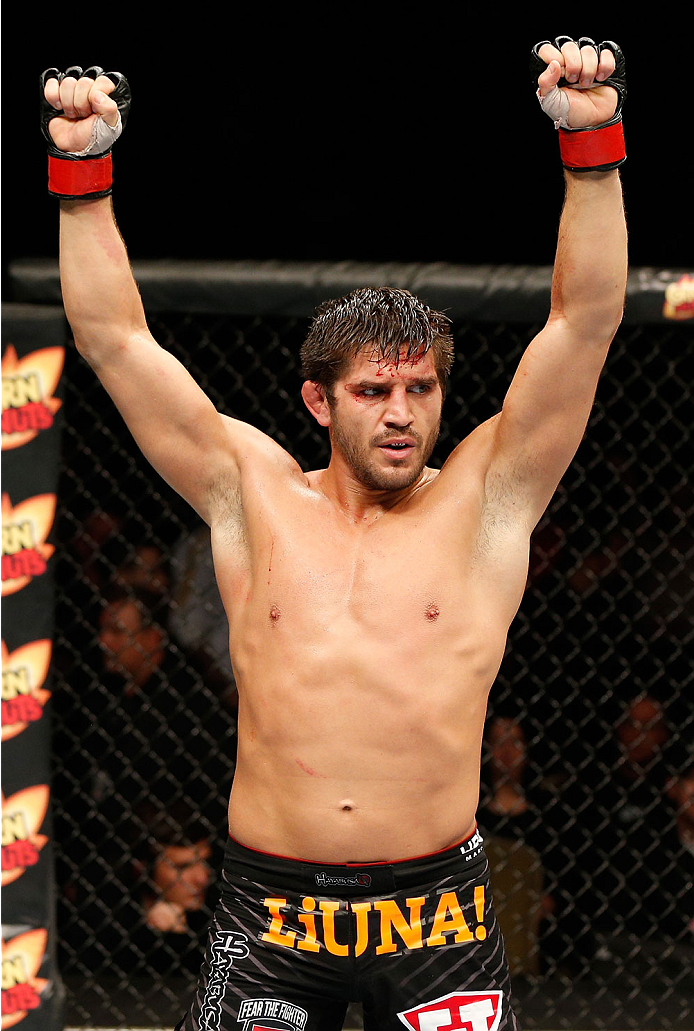 Nearly four years ago, Patrick Cote thought he had reached the end of his MMA rope. Physically he felt fine, but what he felt in the gym didn’t translate to his performances on fight night, and after three straight losses to Anderson Silva, Alan Belcher, and Tom Lawlor, the last coming in October of 2010, he was released from the UFC and facing an uncertain fighting future.

There was a budding broadcasting career to fall back on, and he could always coach, but he still had to figure out whether there was still some fight left in him. So he walked away to take time and let the dust settle, and when he returned to the gym, he would find out once and for all what his future with gloves on was.

“That was a tough time,” Cote said. “I took three months out of the gym, I didn’t go at all, and when I came back, in my head I was like ‘okay, now we’re gonna see if the fire’s still in me,’ and right away the flame came back. I said let’s do it again. I love this sport and I wanted to make the sacrifice.”

Returning to action in April of 2011, Cote won four straight bouts, earning an invite back to the UFC. He lost his return bout via decision to Cung Le in July of 2012, but after a DQ win over Alessio Sakara, the one-time light heavyweight moved down from 185 pounds to 170, and he has since won two straight over Bobby Voelker and Kyle Noke. Add in that broadcasting career and a run on the Ultimate Fighter Nations that saw him lead Team Canada to all four slots in the two divisional finals, and life is pretty good for the Quebec native these days.

“I can’t complain,” he laughs. “Everything’s going pretty well with me in my fighting career. I know I’m not young anymore, I’m 34 years old, but I feel so good physically and mentally. I’ve added some great people to my team and now I feel like I finally have a real solid team and I have no weakness around me. For the last 13 years I’ve been doing it full-time and I still enjoy it.”

As the saying goes, winning solves everything, and while that’s the case here, it’s more than that for Cote. Having come up the hard way in the sport (can you get a rougher UFC debut than a prime Tito Ortiz on short notice in 2004?), he’s seen the ups and downs, he’s figured things out, and he’s still standing. He may describe himself as old at 34, but in reality, he has the experience and the physical ability to still make some noise, and as he prepares for talented prospect Stephen Thompson this Saturday at UFC 178, it’s experience he will likely rely on first before letting the physical part take over.

Cote’s April win over fellow TUF Nations coach Noke was one of his most disciplined, and he used all the tools at his disposal to log a solid performance and his third straight win. Thompson, a dynamic striker with the ability to take an opponent out with a single punch or kick, presents different problems than Noke does, but when you take into account that Cote’s only loss by KO was due to a knee injury suffered in the Silva fight, “The Predator” may have the knowhow and granite chin to take Thompson into some deep waters. And if he can pull off the win, that’s four straight and likely a ranking in the welterweight top 15. From there, well, Cote’s ultimate end game hasn’t changed.

“It’s always the same goal,” he said. “I don’t want to talk for anybody else, but for me it’s always been the same thing – I want to have another title shot. I do this sport and make all these sacrifices to be number one, and in my mind there’s no doubt that I want to be in the title race. I want to win and put pressure on the UFC to give me bigger fights. But it’s one fight at a time, I never look past my opponent, and my next fight is my most important one.”

But with the possibilities ahead of him should he keep winning, it’s hard not to get excited. And Cote is. It’s why, with other options in front of him careerwise, he still opts for the day job in which he puts on gloves and bites down on a mouthpiece. That requires a lot of sacrifice, but he’s willing to go there.

“In the UFC, you can’t take anything easy,” Cote said. “There are so many young guys that try to take your place, and the sport’s changed so fast and everybody gets so much better every year. You can’t go slow. When you’re in training camp you have to diet, and the social world is not an option for you because you train two or three times a day. I had to do my camp during summertime, and in Montreal when it’s summer you want to take advantage of that because the rest of the year it’s cold and you have snow. (Laughs) But as long as you enjoy what you do, I think it’s easier, and that’s how I feel. You have to make sacrifices to train well and put your head in a good place, and the famous quote is the harder you train, the easier the fight.”

“I don’t live with regrets at all.”