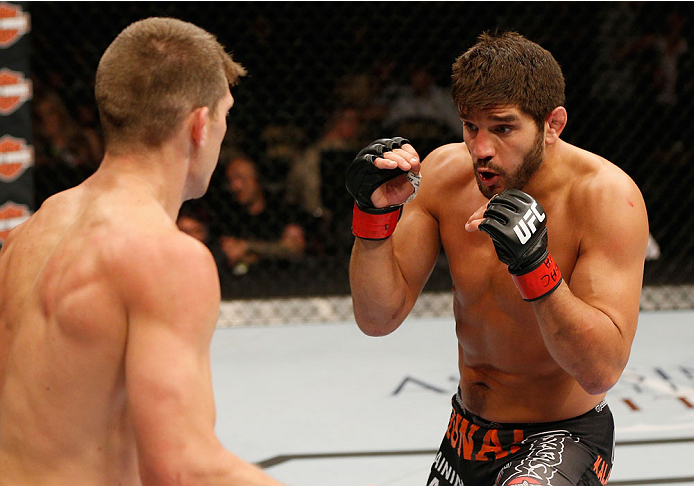 Patrick Cote admits that he hasn’t paid attention to the great story he’s writing at the moment, maybe because the 35-year-old is having too much fun.

“I’m a veteran now and a lot of things come with that,” he said. “There are a lot more injuries, but at the same time, there’s a lot more experience. So yeah, I’m still enjoying it, and I still wake up every morning and enjoy going to the gym and training. Somebody pays me to be in good shape, so that’s pretty cool.”

More than that, the Quebec native gets paid to fight, and as of late, he’s put together a run that not too many in their mid-30s can muster in this game, especially those who have been fighting professionally for nearly 15 years. But with wins in four of his last five bouts leading up to Sunday’s matchup with Josh Burkman in Saskatoon, Cote’s story is a feel good one for those who remember “The Predator” coming in on short notice to move up the UFC 50 card to face former light heavyweight champ Tito Ortiz in 2004. And in his Octagon debut, no less.

A lot has gone on since then for Cote – a title shot against Anderson Silva ended by injury, ups, downs, spectacular highs and crippling lows – but through it all, he’s been a pro and a man focused on the big picture, not just the here and now. And it’s worked for him.

“I just listen to myself and I’m still enjoying what I’m doing,” he said. “The day I wake up and will say ‘man, I don’t want any punches in my face,’ (Laughs) I will stop. It’s pretty simple like that. I built my after-career for the last three, four years, and that’s pretty cool because I’m fighting because I want to and not because I need to. It’s still fun, and when I’m ready to pull the plug, I’m not gonna change my lifestyle. I was pretty smart with my money, I put it in a good place and right now, I’m just enjoying the time being in the UFC and being able to compete at this level at my age. After so many years, I’m still there.”

Cote isn’t just showing up for the paycheck though. Since late-2012, his only loss is via decision to Stephen Thompson, and with an evolving game that includes the best wrestling he’s shown as a pro as of late, it’s not out of the realm of possibility to see Cote make a Robbie Lawler-esque trip to the top of the welterweight division if all goes well.

“I’m a big fan of Robbie Lawler,” he said. “This guy is very entertaining and I like him. And he’s right – with the experience you have more knowledge about how to take care of your body, how to train smarter, and it’s all about that. I’m not feeling guilty anymore to take a day off if I need it. (Laughs) You can’t buy experience. It comes with so many years of fighting and training, and you can’t buy that.”

Does he still see himself as a champion though?

“It’s always that,” Cote said. “I don’t think anybody wants to fight just to fight. I think the goal is the same – to be world champion one day – but I’m not a fool. I know I’m 35 years old. I still have a four-fight contract with the UFC, so I enjoy my time, one fight at a time, and it is what it is. Right now, I have a different goal in my career now than to be world champion, but it’s always been to be the best in the world, and I’m still training one hundred percent and hard every day to be able to win every fight I’m going to be involved in.”

“To be the Canadian with the most fights in UFC history,” he said. “That’s my goal now. That would be pretty cool to mark history with my name on it.”

Cote has a little competition for that mark as he approaches his 18th UFC fight this weekend. Fellow Quebecer Georges St-Pierre is the current leader with 21 Octagon bouts, while Ontario’s Sam Stout will compete in his 20th UFC bout on the same card as Cote. It’s a formidable trio that will be remembered in the Great White North no matter who has the most fights, and with Cote holding a 16-1 overall record in his home country, there’s no question that he’s among the best to ever emerge from Canada.

“The fight I lost against Alan Belcher was a little bit controversial,” Cote points out when asked about his nearly perfect record at home. “He did a piledriver against me and that rule is in the gray zone. But I like fighting in Canada. I have a really good fan base here and I feel comfortable and I feel the support of the crowd too. This is my place, this is my country, and everybody that’s gonna come here, they’re gonna pay the price if they want to fight me. I have a good record with the UFC in Canada, and with that comes a lot of confidence, so when I’m confident and I’m healthy, and with the knowledge that I have now, it’s very hard to beat me.”

Cote does know the end will eventually come, like it does for all prizefighters, and though he is well aware that he won’t find anything to replace what he feels on fight night, he’ll worry about that day when he gets there.

“I have a lot of friends who played in the NHL and they say when you take your retirement, it’s not the money, it’s the thrill of the game you miss, and it’s really hard to pull the plug when you have to,” he said. “I think that’s going to be the hardest thing when I retire – just the feeling of walking to the Octagon, feeling the vibe of 10,000 or 15,000 people who support you. It’s going to be hard, and I’m going to miss that for the rest of my life for sure when I pull the plug. But I still think I’ve got a couple of years of good fighting in me, so I’m still gonna enjoy it.”