Patrick Cote and the Hunger for More

"I’m going to touch his chin for sure, but if he doesn’t go down with the
first power punch I give him I have to continue to put pressure on him
and I think that is the key to this fight." - Patrick Cote 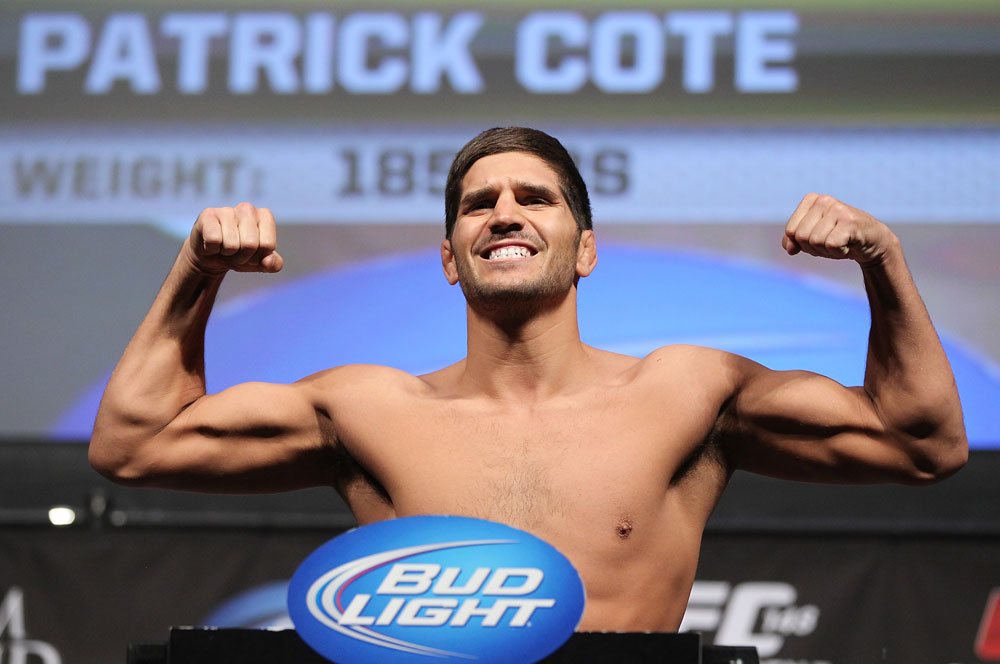 It was a hot Las Vegas eve within the hallowed halls of the MGM Grand Garden Arena when Patrick Cote made his return to the Octagon this past July.  As a fighter on the stacked main card of the most anticipated rematch in years between Anderson Silva and Chael Sonnen, the desert wasn’t the only factor in the heat radiating throughout the city that day.  The lights were brighter and the pressure was high and, as usual, Cote’s return would not be against just any middleweight.  He was given Cung Le and a chance to reignite a career that had pitted him against the night’s headlining champion almost four years prior.

The result: a unanimous decision loss. However, despite the undesired end result, Cote sees the brightness amid the murk.

“In my mind I think I did 90% good in this fight, but some details cost me the fight,” he said. “Once again, I get back in the UFC with a very tough match against Cung Le, but you never have an easy fight in the UFC.  I was happy to fight him; he is a legend in this sport.  I didn’t hit the target like I thought that I should do, my footwork wasn’t great, I didn’t catch the angles well, and these three major things cost me the fight.  Still, I think that it was a very entertaining fight; the UFC was happy, the crowd was happy and I was happy - not that I lost, but with my performance.”

The return was after an almost two year absence from the Octagon and prior to that a knee injury sustained in the fight against Anderson Silva that left him with an almost two year lapse from the sport in general.  Still, his first return from injury saw him jump right in against a game Alan Belcher and then Tom Lawlor, some of the toughest competitors in the middleweight division.

“A lot of people advised me not to fight Alan Belcher right away in my first fight back after a long layoff, but I just fought Anderson Silva and I wanted to get back on top of the world right away.  I never chose any of my opponents. I fought the guys that they put in front of me and it took me a couple of minutes to get comfortable inside the Octagon, but I think I was winning the fight until the thing happened with Belcher and all that.  This rule (about pile drivers) is in the gray zone, but after that I had a pretty bad fight against Tom Lawlor and I received my walking papers from the UFC.  I wasn’t surprised. I wasn’t happy, but I wasn’t surprised.”

Three consecutive losses in the UFC saw “The Predator” go the way of the wandering warrior.  Taking four fights outside of the UFC, Cote displayed a hunger for big show resurgence that amassed him four consecutive wins even when faced with precarious circumstances.

“I’m undefeated outside of the UFC and I wanted to fight the best fighters available, but it was hard to find a great fighter that wanted to fight me in a smaller show.  Three of the four wins were against former UFC fighters and the last one was against Gustavo Machado in Brazil in his backyard, and I’m talking deep in the middle of nowhere in a forest.  I went down there to prove that I wanted to do everything possible to get back in the big show so I went to Brazil to fight this guy.  I won the first round and it was my second stoppage in the first round in a row and then the UFC called me back to fight Cung Le.”

The next challenge for Cote is Alessio Sakara on yet another stacked and highly anticipated card.  UFC 154 is headlined by the return of fellow French-Canadian Georges St-Pierre vs. Carlos Condit, and takes place in Cote’s backyard of Montreal.  With both Cote and Sakara coming off losses, the time to turn the tide has never been more serious for both competitors.

“I think he’s a really good boxer, a very technical boxer,” said Cote of his foe. “He always goes forward, and you can see from the majority of his record in the UFC that he lost or he won in the first round, so I think right away I have to be ready.  He’s a black belt in BJJ, so he’s pretty well rounded, and he just lost his last two fights, so he’s going to come very prepared and I’m looking for that. I know it’s going to be a very entertaining fight for the crowd.”

Switching gears a bit, Cote went to New York and worked with Matt Serra’s crew of Pete Sell and Costa Philippou before returning back to his regular Canadian training regimen.  The switch aided him in preparation for what Cote believes will be a striking match.

“I did a lot of sparing with Costa Philippou over there.  He’s a great boxer, a powerful boxer that has the same style as Sakara but ten times more powerful.  I went there for a couple of weeks and then I came back to Montreal for the rest of my training camp to train with Fabio Holanda and the national wrestling team here.”

Styles make fights, and Cote feels that this challenge is just the right stylistic matchup to make for great viewing and a stellar performance on his part.

“I like this matchup.  He’s a righty and I fought six southpaws in the UFC but my style is way better when I fight an orthodox guy instead of a southpaw.  He’s a boxer, so he’s going to probably stay on his feet with me.  He’s been stopped a couple of times in the UFC so maybe his chin is not his best weapon, but I can’t count on that.  I’m going to touch his chin for sure, but if he doesn’t go down with the first power punch I give him I have to continue to put pressure on him and I think that is the key to this fight.”