“I will bring all of my tricks and tactics to the table, do my best and hopefully get a conclusive win.” - Claude Patrick 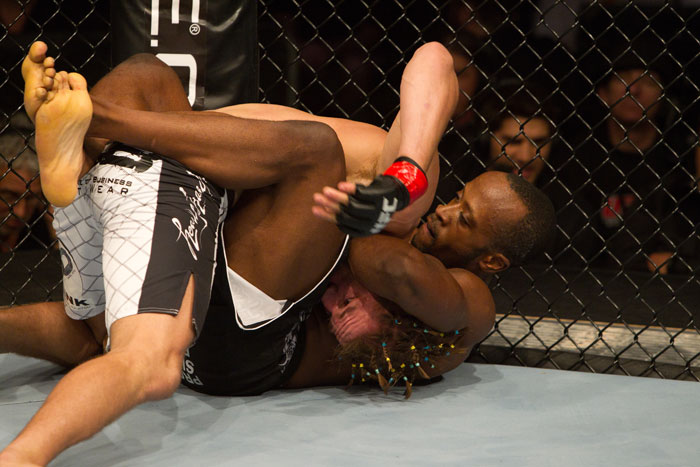 Claude Patrick is tired of talking about his near-death experience in 2008. All the Torontonian really cares to discuss is his fast-approaching battle with Daniel Roberts at UFC 129.

And even then – when the topic is his next foe – Patrick has little to say, seeming like a single-minded man in the middle of a metamorphosis he doesn’t want interrupted. The winner of 12 straight bouts has set his intense gaze on becoming an elite UFC fighter, the hallowed stratosphere where friends and training partners Georges St-Pierre and Carlos Newton roamed while claiming UFC titles and exalting Canadian MMA in the process. No doubt, emerging triumphant in front of 55,000 super-charged Canadians at Rogers Centre would be a huge step in the right direction. Yet Patrick tried to downplay the home-crowd advantage, indicating he will try to ride the wave his own energy, not the crowd’s.

“I only see one or two people when I’m fighting, sometimes two if the ref is nosy,” he said. “I don’t think about anything else.”

Accustomed to opponents seeking to avoid the bedrock of his game – Brazilian jiu-jitsu – Patrick believes Roberts will be the exception to the rule, willing to fight fire with fire.

“This is a fight where he may try to attack me at my strong suit, which is my ground game,” said Patrick, a Brazilian jiu-jitsu brown belt. “Guys usually try to avoid me on the ground. I’ve upgraded my conditioning because he (Roberts) keeps a pretty high pace.”

The undercard matchup pits two up-and-coming welterweights who boast spectacular records and wicked submissions. Patrick (13-1) and Roberts (12-1) have both submitted nine opponents. Yet it is Patrick who has proven more with his hands, TKO’ing three foes versus none for Roberts.

“I like to think I have an advantage in every area, but so did (Mirko) Cro Cop before (Gabriel) Gonzaga kicked him in the head,” Patrick said. “I will bring all of my tricks and tactics to the table, do my best and hopefully get a conclusive win.”

Patrick has been a nomad of sorts for his camp leading up to this fight. He trained six weeks in Toronto, where he calls home, then journeyed to Las Vegas and Huntington Beach, Calif., over the next six weeks. He has trained with Robert Drysdale, Mark Munoz, Fabricio Werdum and Krzysztof Soszynski, among others. In his down time, Patrick is a fan of HBO’s critically acclaimed series “The Wire” and AMC’s award-winning series “Mad Men.”

Survivor of a violent sneak attack at a Quebec hotel in 2008 that left him in a medically-induced coma, Patrick has said in the past that the experience deepened his devotion to mixed martial arts. He is 6-0 since the incident, including 2-0 in the UFC.

Like St-Pierre, Patrick has trained with some of Canada’s top Olympic-caliber wrestlers. He offered his analysis of next week’s GSP-Jake Shields welterweight title fight.

“I don’t see Jake doing much to Georges stylistically, but it’s not a paper matchup; it’s an MMA fight,” Patrick said. “Georges is training with Olympic caliber wrestlers everyday and if Jake can’t take him down it won’t be a good thing, ya’ know?”