Patolino Amped Up for Rio Return

"The fans can expect an exciting fight and to see all the hard work I have put in this camp." - William Patolino 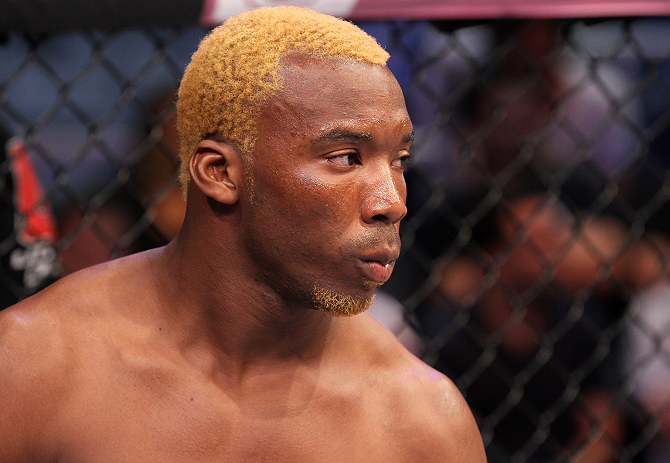 Daffy Duck has officially arrived and his Muay Thai is scary.

But the UFC’s version of the famed bird is a lot less wise-cracking fowl and a lot more face-punishing striker as The Ultimate Fighter Brazil 2 finalist William “Patolino” Macario is nicknamed after the crazy cartoon.

It’s possible that “Non-Stop Kicking and Punching Machine” doesn’t translate into a cute Portuguese nickname, but that’s exactly what Patolino looked like in his first Octagon win at UFC 168 against iron-chinned Strikeforce veteran Bobby Voelker.

“The Bobby Voelker fight was my second fight in the UFC and I knew I had to put on a good performance,” Patolino said through translator Derek Kronig Lee. “I lost my debut so this was my chance to show that I belong in the UFC. I think I didn't have a chance to show the fighter that I am in the first fight, so it was the opportunity to show my talents.”

At the end of the year event in Las Vegas, Patolino put on an offensive clinic from pillar-to-post to earn his first UFC win and his first career victory by unanimous decision. Of his six wins prior to his appearance on TUF, Patolino earned five by KO and one by submission. Besides never winning by decision in those bouts, he had never even been to a third round in his pro career before December.

Much of the credit for the exciting clash going all 15 minutes goes to his opponent Voelker, who somehow stayed upright after absorbing 133 significant strikes. Not only did Patolino silence critics about his conditioning by going the distance, but he did it without sacrificing quality output by maintaining well over 50% striking accuracy and scoring a takedown in all three rounds.

“He had a lot of KO victories, so he is an experienced striker, but I felt that it matched up well with my style,” Macario said. “I wanted to have finished the fight, but I did what I had to do. It was a good performance. It was a combination of everything that I do and my training. I love the U.S. and it was a great experience fighting in Las Vegas on the same card as so many great fighters, and there were many Brazilians there that night. It was great.”

Up next, the 23-year-old with his trademark dyed blonde hair and beard will return to his native Brazil at UFC 179 for Octagon action against Neil Magny. The TUF 16 alum has been on a tear in 2014 with four consecutive wins, including a second-round TKO of Rodrigo de Lima in June. The Elevation Fight Team product has put his 80-inch reach to great use by keeping his opponents at the end of his punches and himself out of range of theirs.

The striking duo were originally scheduled to tangle in Ohio in May, but now, the welterweights will war in Patolino’s backyard of Rio de Janeiro.

“He is a tough opponent, a very good athlete and has proven that this past year,” Patolino said. “But I am very focused on my goals and he is another opponent who I need to get through to reach my goals. I am confident my striking will be much superior and our styles will match up to make an exciting fight.”

In preparation for the melee with Magny, Patolino is busy sharpening his skills with the same coach he’s worked with since he was 14 years old: Pedro Silveira. As a member of the Pejor Fight Team, Patolino cut a blue streak through the local Brazilian MMA scene and earned himself his TUF tryout with just half a dozen pro bouts - all wins/finishes - on his record. The same core group which got him to the big dance are the same fighters Patolino trusts to help him climb the UFC ranks.

“I train at Pejor in Rio de Janeiro under Pedro Silveira,” he said. “We have a lot of very tough guys in our gym who are always challenging me. It's my team, my home and we work like a family. I have to always keep training and keep focused. I believe that I will be among the best in my weight class and that is what keeps me motivated. The fans can expect an exciting fight and to see all the hard work I have put in this camp.”

This Saturday at UFC 179 in Rio, one of Brazil’s youngest and brightest rising stars will aim to cement his place inside the Octagon as Patolino takes on Magny. “I am here to stay,” he declares.

With a big win over Magny, Patolino can prove the UFC’s Daffy Duck is more dangerous than funny.