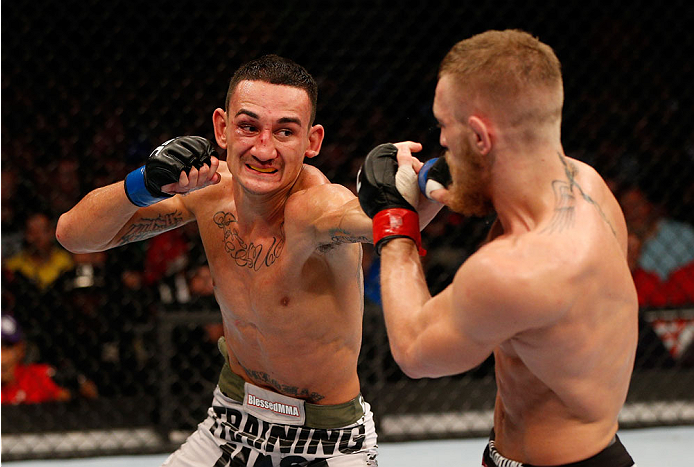 Hawaii’s Max Holloway used to be the new kid on the block. Now at 22, he’s no longer the youngest fighter currently on the UFC roster (he’s the fourth), and with six Octagon bouts under his belt, you could call him a seasoned veteran as he heads into his Saturday bout in Singapore against newcomer Will Chope.

But he’s not bothered when you call him an “old man” of the UFC.

“It just proves that there’s younger talent coming up and the game is evolving,” he said. “Younger guys are coming in and looking like animals.”

And all senior citizen jokes aside, Holloway is still one of the young guns of the sport, still raw, still evolving, and still showing enough of his range of talents to keep fans compelled to watch him every time out. And truth be told, he didn’t just show up on the UFC’s doorstep in 2012 and ask to fight. He’s been plugging away at this thing since he began kickboxing in high school with a bunch of equally ambitious young Hawaiians.

From Guts to Glory

Holloway was hooked immediately, even if his initial trip to the gym was for self-preservation reasons.

“In the city I’m from, Waianae, there’s a lot of fights and people like to fight, so in a streetfight, you just can’t tell someone ‘let’s just box,’” he laughs. “You gotta be ready for takedowns and kicking and punching, and I actually wanted to take it just so I could feel a little better for myself. I always wanted to fight, and I was kind of that scrawny kid in school growing up, so I wanted to learn how to fight, and I got the first taste of kickboxing at 16, and after that, I just started telling everyone that I was gonna go fight in the UFC.”

Three days after he stepped into the gym, he fought in his first kickboxing match and won it, and despite his success, his claims that he was going to become a UFC fighter were met with the 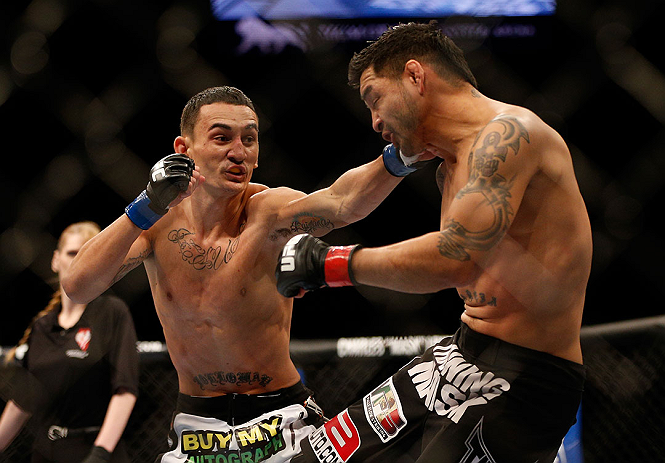 expected jokes from his friends and family. What made it even stranger to them was that Holloway was a top student in high school, so his desire to skip college was baffling.

Yet two months after his 20th birthday, he was strapping on the UFC gloves and facing Dustin Poirier at UFC 143 in February of 2012. Was it too much too soon for the youngster? Probably, as he was submitted by the veteran in the first round, but Holloway more than proved that he was ready for prime time as he fought three more times in 2012, defeating Pat Schilling, Justin Lawrence, and Leonard Garcia.

“Horrible year,” said Holloway, who dropped a close split decision to Dennis Bermudez, then a unanimous nod to Conor McGregor. “No one likes to lose. You lose, you get cut from the UFC, and I’m 0-2 right now.  Some people say that Dennis Bermudez fight, I should have won, but at the end of the day I didn’t get the W, and I lost. There’s nothing to take away from Dennis, I lost, and the McGregor fight, he’s complaining about his (knee) injury, and I hurt myself in the first 30 seconds of that fight. I hurt my ankle and had a high sprain from then on. No one knew and I didn’t want to tell anybody, but the first thing this guy does after not finishing me is going and complaining that he hurt his knee. And he hurt his knee at the end of the second round; I hurt my ankle in the first 30 seconds of the first round.”

“It was unfortunate and bad luck,” he said of the year just passed. “I had four fights in that first year, and then I had two in 2013, and leaving this year 0-2, now I get a chance to come back stronger than ever and start the year off with a bang, and I hope to get back on that winning horse.”

At the very least, Holloway sounds refreshed, confident, and ready to go. Not that it’s going to be an easy road to get back in the win column. First was the 14-plus hour plane ride to Singapore, the usual fun getting acclimated and cutting weight, and then on Saturday, he’ll face a nightmare style matchup in the 6-foot-4 Chope. Yes, a 6-4 featherweight.

“It’s hard,” laughed Holloway when asked about finding sparring partners to replicate Chope. “There’s no 6-4 featherweights around. It’s unheard of. It was weird when I heard it. I didn’t even know I was gonna fight this guy. I saw him get announced and he was fighting someone else, and I was like ‘6-4? What is this guy eating?’ (Laughs) But it is what it is. I got taller guys in that got me used to that range.”

Included was a 6-2 lightweight and some taller middleweights that definitely gave Holloway fits size wise, but they did get him as ready as he can be for this weekend’s bout, and when it comes to the lessons learned in 2013, the first and most important is patience. 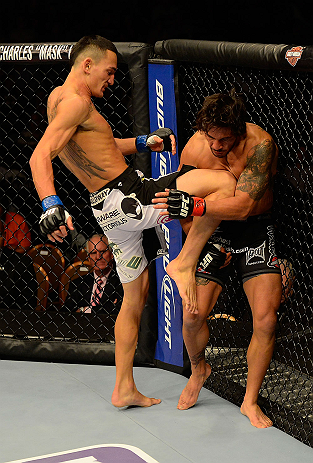 “I learned to take my time,” he said. “I was trying to rush things. Even the year before I was trying to rush things, and it just so happened that I was on the winning side. I keep forgetting that I’m 22. But I’m here trying to set records. Who doesn’t want to be the youngest champion in the UFC and all that kind of stuff? But I talked to my coaches after my last fight and they were telling me that I need to slow things down and think ahead. I want to be in this sport, and I want to be in the UFC, for a long time. I want to finish my MMA career in the UFC.”

The first step of the next of his career? A win on Saturday night.

“The UFC loves winners and everybody loves winners, so you can’t be losing two in a row,” said Holloway. “I’m fighting a newcomer now, and if I lose, it’s probably pack my bags and go home. So I really need this fight, I need to start this year off with a bang, and hopefully I can get three to four fights this year like I did in 2012 and just keep riding that winning horse all year round.”