Patience and Perseverance: The Will of Dominick Cruz

A Healthy Dominick Cruz Is Finding His Way Back To The Octagon In His First Non-Title Bout In Over Five Years at UFC 259: Blachowicz vs Adesanya
By McKenzie Pavacich, on Twitter @mpavacich_ • Mar. 4, 2021

This is not another story about Dominick Cruz on his road to redemption, or his journey through post-injury recovery. We’ve all read enough of those stories throughout his career, and ahead of his featured prelim bout against Casey Kenney at UFC 259, the focus has finally shifted to anything but injuries.

While the matchup between the former WEC and UFC bantamweight champion and the up-and-comer Kenney, on a three-fight win streak, raised a few eyebrows when it was announced, Cruz views this fight just like any other.

“As a champion, I’ve faced guys who weren’t ranked, and in one year they win two or three fights in spectacular fashion, and the next thing I know I’m fighting them for the title,” Cruz said. “So it’s all perception, all interpretation with who deserves what.”

The UFC veteran said he isn’t keen on concerning himself with the numbers placed next to an opponent’s name, believing rankings aren’t indicative of an opponent’s technical skill level in most cases.

“I mean, he’s on a three-fight winning streak,” Cruz said. “I don’t really look at it as anything other than it’s another guy and I’ve got to fight for my life. It’s him or me, and I gotta take him out.”

A three-and-a-half-year layoff sandwiched between two bantamweight title losses, a circumstance that would normally prove to be an imaginatively frustrating one for the average person, instead served as a period of growth for Cruz. And now, seeing as Cruz’s health has reportedly been on the up and up, combined with an unwavering confidence about his abilities, he can finally trust his body and pour all of his efforts into training again.

“I feel good,” the 35-year-old San Diego native said. “Since my last fight I’ve gotten to train consistently for six months so I’m healthy. I’ve been able to train like an athlete without having to stop because of something getting hurt, so that’s nice.” 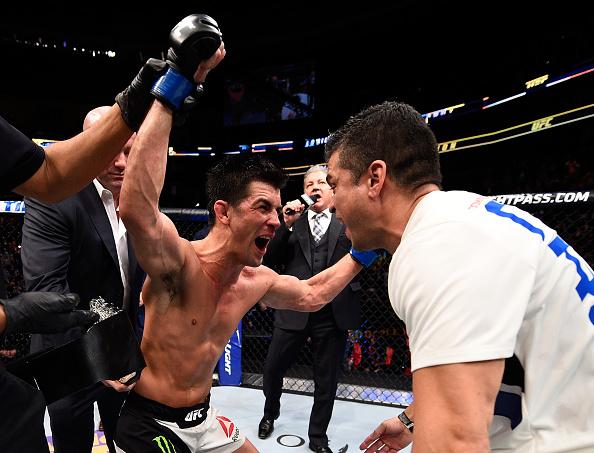 This isn’t the first time Cruz has had to navigate a years-long, injury-riddled layoff. Three years sat between Cruz defending his bantamweight title against Demetrious Johnson in 2011 and knocking out Takeya Mizugaki in his first fight back in just outside of a minute. Then, another year and a half before the split decision victory over TJ Dillashaw to win back a belt he had never lost in the Octagon.

Through all of the layoffs, and even the recent losses, Cruz has been able to preserve his level-headedness, a trait that has likely also contributed to his longevity in the sport. So how exactly did he develop his fairly unique mindset?

“Years of just not having control of a lot of bad situations,” Cruz said, with a laugh. “When you start seeing that things in your life aren’t working, you either make adjustments, or you sit with them. I’ve chosen to make adjustments, consistently, over and over so life doesn’t feel so hard.”

The most prominent lesson learned through his adjustments over the course of more than 15 years as a professional fighter is simple: that nothing on the other side of the chain link fence matters, especially in the UFC. Cruz doesn’t concern himself with his placement on a fight card, rankings, or the perceived quality of an opponent, because at any moment, anything can happen.

And while his reaction to being placed as the final bout on the preliminary portion of the UFC’s most stacked event of 2021 thus far has been perceived by many as Cruz lacking an ego, he’s been quick to correct the misinterpretation. 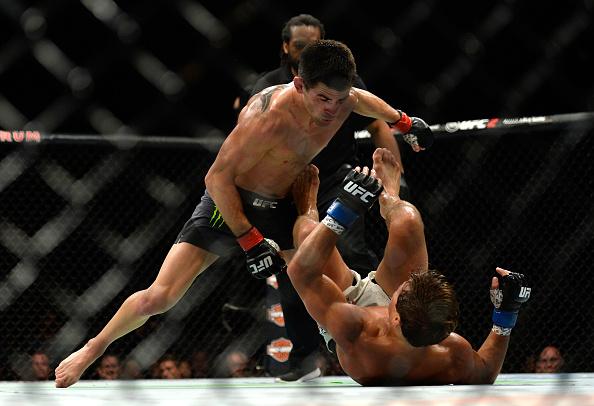 Dominick Cruz punches Urijah Faber during the UFC 199 event at The Forum on June 4, 2016 in Inglewood, California. (Photo by Brandon Magnus/Zuffa LLC)

“Of course, I have an ego at times; it’s a healthy thing to have an ego, at times,” Cruz emphasized. “It’s just that there’s a time when having an ego does not serve you. So, in that particular instance [of being on the prelims], I’m not attached to my ego at all. On fight night, I am.”

So when he squares off against the former two-division LFA champion in his first non-title bout in nearly six years, Cruz will be treating this fight ⁠— and his opponent ⁠— no differently.

“I’m excited to be in there. Casey Kenney is an exciting matchup because of his durability, his skillset, and he’s improved a lot in his striking in the three-fight win streak he’s put together,” Cruz said. “I’ve lost my last two fights. They were title fights, with some of the best in the world. I’m excited to test myself against someone with a win streak. That’s all this is. It’s just a test for myself.”